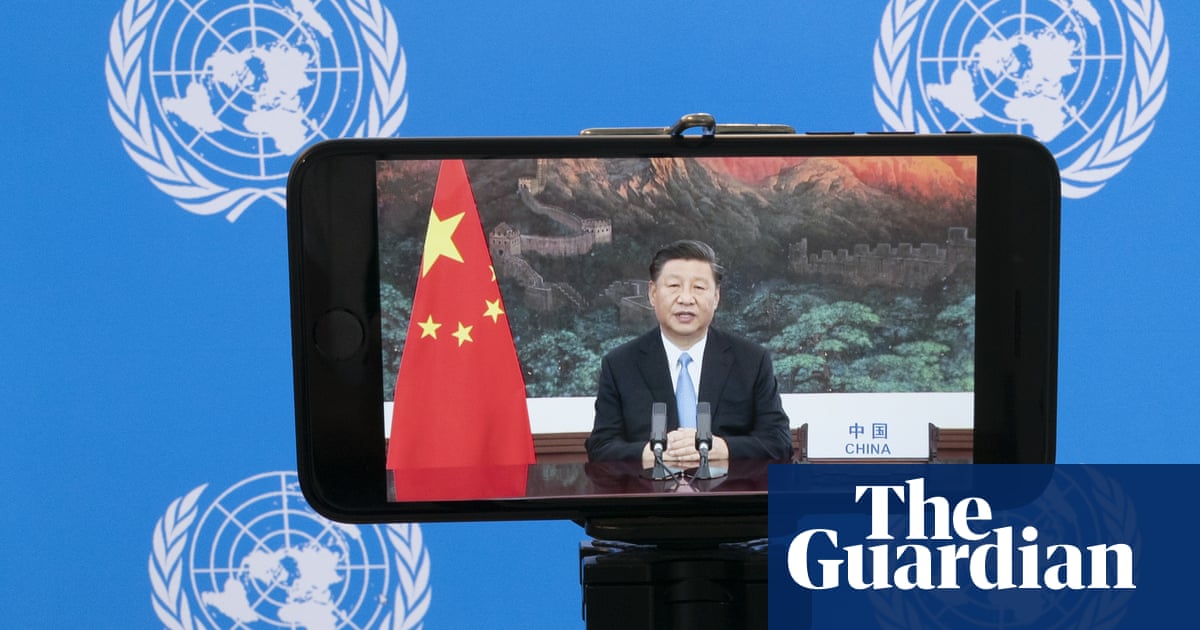 China will reach carbon neutrality before 2060 and ensure its greenhouse gas emissions peak in the next decade, Xi Jinping has told the UN general assembly.

“China will scale up its intended nationally determined contributions [under the Paris climate agreement] by adopting more vigorous policies and measures,” the Chinese president said, calling for a “green recovery” from the coronavirus pandemic.

The unexpectedly forthright commitment will give fresh impetus to the UN’s efforts to galvanise action on the climate crisis, which has been flagging as the coronavirus has wreaked havoc on the world’s societies and economies this year.

“Xi’s commitment to achieve carbon neutrality before 2060 is a gamechanger,” said Thom Woodroofe, a former climate diplomat and senior adviser at the Asia Society. “For the first time ever there is now a clear long-term trajectory for decarbonisation in China.”

China is the world’s biggest emitter, and had previously committed only to aim for peak emissions in about 2030. Its response to the coronavirus crisis has included plans to build new coal-fired power stations. But last week the country held an online summit with the EU, amid signals Beijing would take a stronger climate stance.

Last week, the EU also came forward with strengthened commitments under the Paris agreement, pledging to cut emissions by 55% by 2030. China’s pledge to bring forward a strengthened national plan is a major boost to the prospects for next year’s vital UN climate summit. Called Cop26 and to be hosted by the UK, the summit has been delayed by a year to November 2021.

Cop26 is viewed as one of the last chances to put the world on track to meet the goals of the 2015 Paris agreement, to hold global heating to well below 2C, regarded as the limit of safety. Current commitments under the accord would lead to a disastrous 3C rise.

Every nation is supposed to come forward this year with a strengthened national plan to make Cop26 a success. But until recently, it was mostly only smaller countries that had done so, covering a minority of global emissions. With China and the EU now publicly committed to bringing forward new plans, two of the world’s three biggest emitters are now pledging strong action at Cop26.

The biggest player now missing from the stage is the US, which under Donald Trump is scheduled to withdraw from the Paris accord on 4 November, the day after the presidential election. He used his UN general assembly speech, just before Xi spoke, to criticise the accord and attack China as the world’s biggest emitter. If he wins a second term, other nations have vowed to press on without the US, though that will be difficult.

Joe Biden, the Democratic presidential candidate, has vowed to rejoin the Paris agreement and to set the US on course for a low-emissions future.

Policy experts and green campaigners hailed China’s move as a major step forward. Laurence Tubiana, the French diplomat who was key in crafting the Paris accord, now chief of the European Climate Foundation, said: “Xi Jinping’s commitment to peak emissions before 2030 and reach carbon neutrality before 2060 is very welcome. The leadership from Beijing, Brussels and capitals across the developing world should give us all confidence as we prepare for Cop26 next year.”

Li Shuo, a senior climate and energy policy officer at Greenpeace East Asia, said: “Xi’s pledge will need to be backed up with more details and concrete implementation. By how much earlier can China peak its emissions? How to reconcile carbon neutrality with China’s ongoing coal expansion? These are hard questions that demand a better response from Beijing.

“But [the commitment] will certainly help turn a challenging year for the environment around and mark it as the beginning of a reinvigorated round of global climate efforts.”

To hold the world within the 2C threshold, according to scientific estimates, emissions must start to fall drastically this decade and the world must be in effect carbon neutral – with no more carbon emitted than can be removed from the atmosphere – by about the mid-century point. This is usually interpreted as rich countries reaching net zero emissions by 2050, and developing countries in the following decade.

Richard Baron, the executive director of the 2050 Pathways Platform, an NGO, said: “[China’s] carbon neutrality goal is absolutely feasible both technically and economically. With China and the EU both setting stronger targets, the picture for how the world can meet the long-term goals of the Paris agreement just got much clearer.”

China’s commitment comes after intense diplomatic engagement from the EU and the UN. The EU held a virtual meeting with China last week, and the UN secretary general, António Guterres, who spoke out strongly to encourage China over the summer, is making climate a focus of this year’s UN general assembly, alongside the Covid-19 pandemic.

It will also put pressure on the Cop26 host nation. The UK, though holding the presidency, has not yet committed to producing a new nationally determined contribution (NDC) under the Paris agreement this year, which is the official deadline. Boris Johnson is expected to use the UN general assembly to showcase Britain’s Cop26 presidency and unveil plans to end UK development aid funding for fossil fuels overseas.