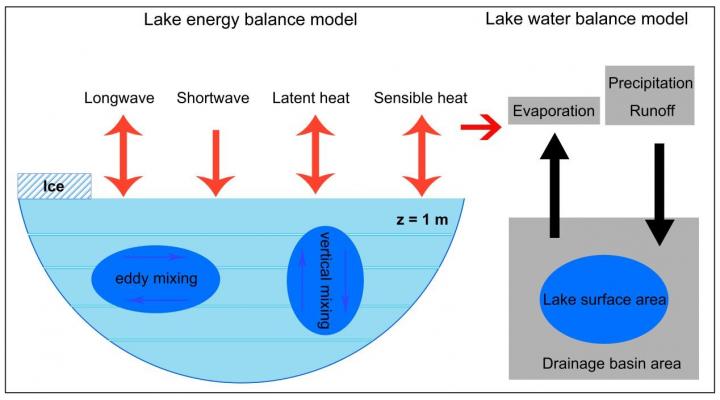 Studying the lake evolution and environmental change during the Holocene is of great significance for predicting the future global climate change. Relevant researches were mostly focused on reconstructions of lake level, regional effective moisture and paleoenvironment using geomorphic, sedimentological, and biostratigraphic methods. However, with the development of paleoclimatology, only using lake sediments as indicators to reconstruct lake evolution, water balance fluctuation and paleoenvironment change cannot more specifically explain the mechanism of past climate change. It is therefore necessary to quantitatively reconstruct and simulate the past climate change from a new perspective.

Lake water balance system is constantly responding to changes of climatic conditions on different time scales. Researchers constructed a virtual lake system by assuming that each land grid cell is a separate lake. Then based on a transient climate evolution model, a lake energy balance model and a lake water balance model, they continuously and quantitatively simulated Holocene effective moisture change represented by variability of virtual lake level in East and Central Asia. The virtual lake level, lake area, water depth and lake salinity are not equivalent to actual values, but these assumptions can be used to estimate relative changes of the regional effective moisture.

The evaporation of lake surface depends on the heat capacity of water, water density, lake depth, lake surface temperature, shortwave radiation and longwave radiation absorbed by the water surface, longwave radiation emitted by the water surface, latent heat flux, sensible heat flux, etc. The components of lake water balance model mainly include lake surface precipitation, evaporation and runoff, while the runoff change is closely related to the process of the runoff generation and confluence of the basin. Lake models forced by a coupled atmosphere-ocean general circulation model indicate that since the early Holocene, the changes of precipitation in northern China and Tibetan Plateau are consistent with the changes of summer solar radiation in Northern Hemisphere low latitudes, showing a decreased trend. The decrease of summer solar radiation in the Northern Hemisphere reduced the thermal contrast between land and sea, and produced weak Asian summer monsoon, so that less water vapor was brought. Accordingly, a decline in effective moisture through the Holocene in the Tibetan Plateau was primarily a result of decreased precipitation. However, decreased effective moisture in northern China was influenced by the combined effects of decreased precipitation, and increased evaporation caused by longwave radiation and shortwave radiation. The late Holocene high lake level in southern China was maintained by high coastal precipitation, possibly resulted from changes in local ocean feedbacks. Increased precipitation contributed to the effective moisture rise in northern Central Asia, which was induced by the enhancement of the westerly wind circulation.

This study not only analyzes the factors affecting the Holocene climate change in East and Central Asia by using the causes about water balance fluctuation, but also provides a new method to quantitatively reconstruct and simulate the past climate change. Orion the Hunter is easy to spot