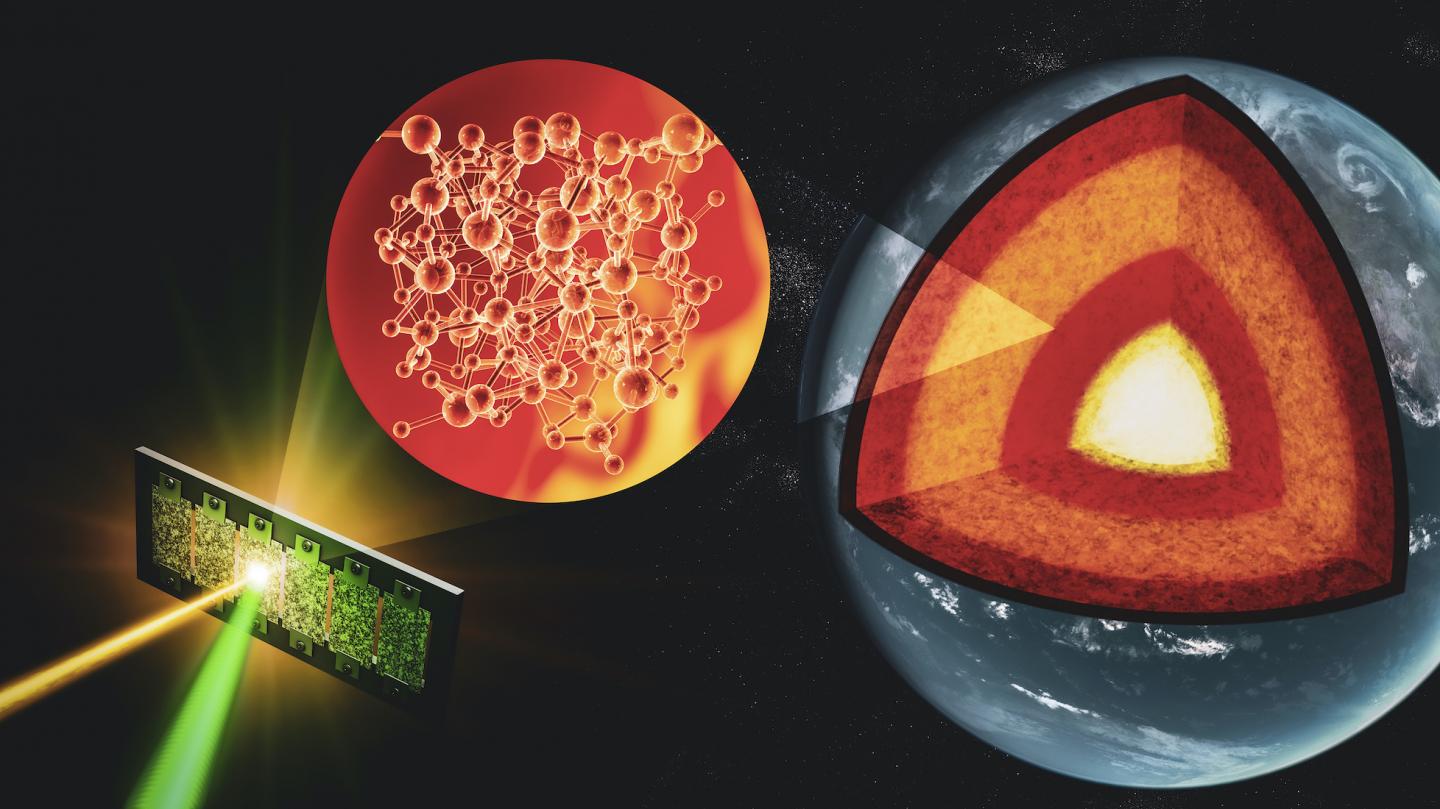 IMAGE: Researchers developed a technique that allows them to study the atomic arrangements of liquid silicates at the extreme conditions found in the core-mantle boundary. This could lead to a better… view more

Far below the Earth’s surface, about 1,800 miles deep, lies a roiling magmatic region sandwiched between the solid silicate-based mantle and molten iron-rich core: The core-mantle boundary. It’s a remnant of olden times, the primordial days about 4.5 billion years ago when the entire planet was molten, an endless sea of magma. Although the region’s extreme pressures and temperatures make it difficult to study, it contains clues about the mysterious origin story of the world as we know it.

“We’re still trying to piece together how the Earth actually started to form, how it transformed from a molten planet to one with living creatures walking around on its silicate mantle and crust,” says Arianna Gleason, a scientist at the Department of Energy’s SLAC National Accelerator Laboratory. “Learning about the strange ways materials behave under different pressures can give us some hints.”

Now, scientists have developed a way to study liquid silicates at the extreme conditions found in the core-mantle boundary. This could lead to a better understanding of the Earth’s early molten days, which could even extend to other rocky planets. The research was led by scientists Guillaume Morard and Alessandra Ravasio. The team, which included Gleason and other researchers from SLAC and Stanford University, published their findings this week in the Proceedings of the National Academy of Sciences.

“There are features of liquids and glasses, in particular silicate melts, that we don’t understand,” says Morard, a scientist at the University of Grenoble and Sorbonne University in France. “The problem is that molten materials are intrinsically more challenging to study. Through our experiments we were able to probe geophysical materials at the extremely high temperatures and pressures of deep Earth to tackle their liquid structure and learn how they behave. In the future we will be able to use these types of experiments to recreate the first moments of Earth and understand the processes that shaped it.”

Hotter than the sun

At SLAC’s Linac Coherent Light Source (LCLS) X-ray free-electron laser, the researchers first sent a shockwave through a silicate sample with a carefully tuned optical laser. This allowed them to reach pressures that mimic those at the Earth’s mantle, 10 times higher than previously achieved with liquid silicates, and temperatures as high as 6,000 Kelvin, slightly hotter than the surface of the sun.

Next, the researchers hit the sample with ultrafast X-ray laser pulses from LCLS at the precise moment the shockwave reached the desired pressure and temperature. Some of the X-rays then scattered into a detector and formed a diffraction pattern. Just like every person has their own set of fingerprints, the atomic structure of materials is often unique. Diffraction patterns reveal that material fingerprint, allowing the researchers to follow how the sample’s atoms rearranged in response to the increase of pressure and temperature during the shockwave. They compared their results to those of previous experiments and molecular simulations to reveal a common evolutionary timeline of glasses and liquid silicates at high pressure.

“It’s exciting to be able to gather all these different techniques and get similar results,” says SLAC scientist and co-author Hae Ja Lee. “This allows us to find a combined framework that makes sense and take a step forward. It’s very comprehensive compared to other studies.”

Connecting the atomistic to the planetary

In the future, the LCLS-II upgrade, as well as upgrades to the Matter in Extreme Conditions (MEC) instrument where this research was performed, will allow scientists to recreate the extreme conditions found in the inner and outer core to learn about how iron behaves and the role it plays in generating and shaping Earth’s magnetic field.

To follow up on this study, the researchers plan to perform experiments at higher X-ray energies to make more precise measurements of the atomic arrangement of liquid silicates. They also hope to reach higher temperatures and pressures to gain insight into how these processes unfold in planets bigger than Earth, so-called super-Earths or exoplanets, and how the size and location of a planet influences its composition.

“This research allows us to connect the atomistic to the planetary,” Gleason says. “As of this month, more than 4,000 exoplanets have been discovered, about 55 of which are positioned in the habitable zone of their stars where it’s possible for liquid water to exist. Some of those have evolved to the point where we believe there’s a metallic core that could generate magnetic fields, which shield planets from stellar winds and cosmic radiation. There are so many pieces that need to fall into place for life to form and be sustained. Making the important measurements to better understand the construction of these planets is crucial in this age of discovery.”

Ravasio is a scientist at Sorbonne University and Ecole Polytechnique in France. The team also included researchers from Arizona State University; the University of Oslo, Norway; the National Museum of Natural History, Clermont Auvergne University, the French Alternative Energies and Atomic Energy Commission and the European Synchrotron Radiation Facility in France; and Helmholtz-Zentrum Dresden-Rossendor in Germany.

EMISSIONS: Why are EPA methane estimates so low? It’s guesswork