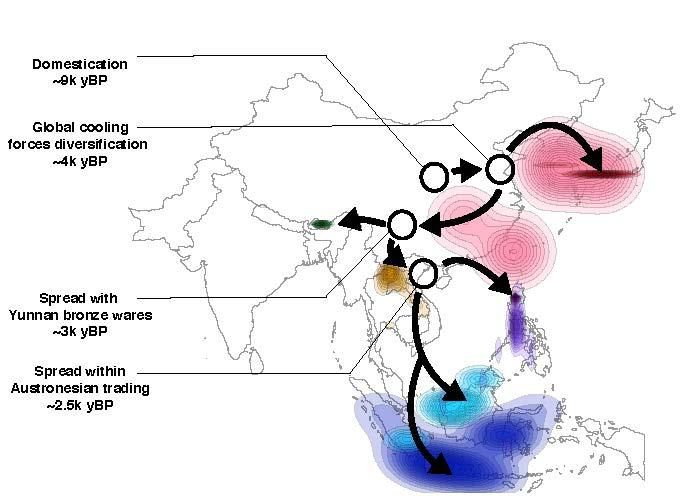 A major global cooling event that occurred 4,200 years ago may have led to the evolution of new rice varieties and the spread of rice into both northern and southern Asia, an international team of researchers has found.

Their study, published in Nature Plants and led by the NYU Center for Genomics and Systems Biology, uses a multidisciplinary approach to reconstruct the history of rice and trace its migration throughout Asia.

Rice is one of the most important crops worldwide, a staple for more than half of the global population. It was first cultivated 9,000 years ago in the Yangtze Valley in China and later spread across East, Southeast, and South Asia, followed by the Middle East, Africa, Europe, and the Americas. In the process, rice evolved and adapted to different environments, but little is known about the routes, timing, and environmental forces involved in this spread.

In their study, the researchers reconstructed the historical movement of rice across Asia using whole-genome sequences of more than 1,400 varieties of rice–including varieties of japonica and indica, two main subspecies of Asian rice–coupled with geography, archaeology, and historical climate data.

For the first 4,000 years of its history, farming rice was largely confined to China, and japonica was the subspecies grown. Then, a global cooling event 4,200 years ago–also known as the 4.2k event, which is thought to have had widespread consequences, including the collapse of civilizations from Mesopotamia to China–coincided with japonica rice diversifying into temperate and tropical varieties. The newly evolved temperate varieties spread in northern China, Korea and Japan, while the tropical varieties and spread to Southeast Asia.

“This abrupt climate change forced plants, including crops, to adapt,” said Rafal M. Gutaker, a postdoctoral associate at the NYU Center for Genomics and Systems Biology and the study’s lead author. “Our genomic data, as well as paleoclimate modeling by our collaborators, show that the cooling event occurred at the same time as the rise of temperate japonica, which grows in milder regions. This cooling event also may have led to the migration of rice agriculture and farmer communities into Southeast Asia.”

“These findings were then backed up by data from archaeological rice remains excavated in Asia, which also showed that after the 4.2k event, tropical rice migrated south while rice also adapted to northern latitudes as temperate varieties,” said Michael D. Purugganan, the Silver Professor of Biology at NYU, who led the study.

After the global cooling event, tropical japonica rice continued to diversify. It reached islands in Southeast Asia about 2,500 years ago, likely due to extensive trade networks and the movement of goods and peoples in the region–a finding also supported by archeological data.

The spread of indica rice was more recent and more complicated; after originating in India’s lower Ganges Valley roughly 4,000 years ago, the researchers traced its migration from India into China approximately 2,000 years ago.

While the researchers had thought that rainfall and water would be the most limiting environmental factor in rice diversity, they found temperature to be the key factor instead. Their analyses revealed that heat accumulation and temperature were very strongly associated with the genomic differences between tropical and temperate japonica rice varieties.

“This study illustrates the value of multidisciplinary research. Our genomic data gave us a model for where and when rice spread to different parts of Asia, archaeology told us when and where rice showed up at various places, and the environmental and climate modeling gave us the ecological context,” said Purugganan. “Together, this approach allows us to write a first draft of the story of how rice dispersed across Asia.”

“Armed with knowledge of the pattern of rice dispersal and environmental factors that influenced its migration, we can examine the evolutionary adaptations of rice as it spread to new environments, which could allow us to identify traits and genes to help future breeding efforts,” said Gutaker.

The research at NYU was supported by the Zegar Family Foundation and the National Science Foundation Plant Genome Research Program (IOS-1546218).

Towards a new generation of vegetation models NASA To Provide $6 Million For Electric Aircraft Research At Univ. Of Illinois