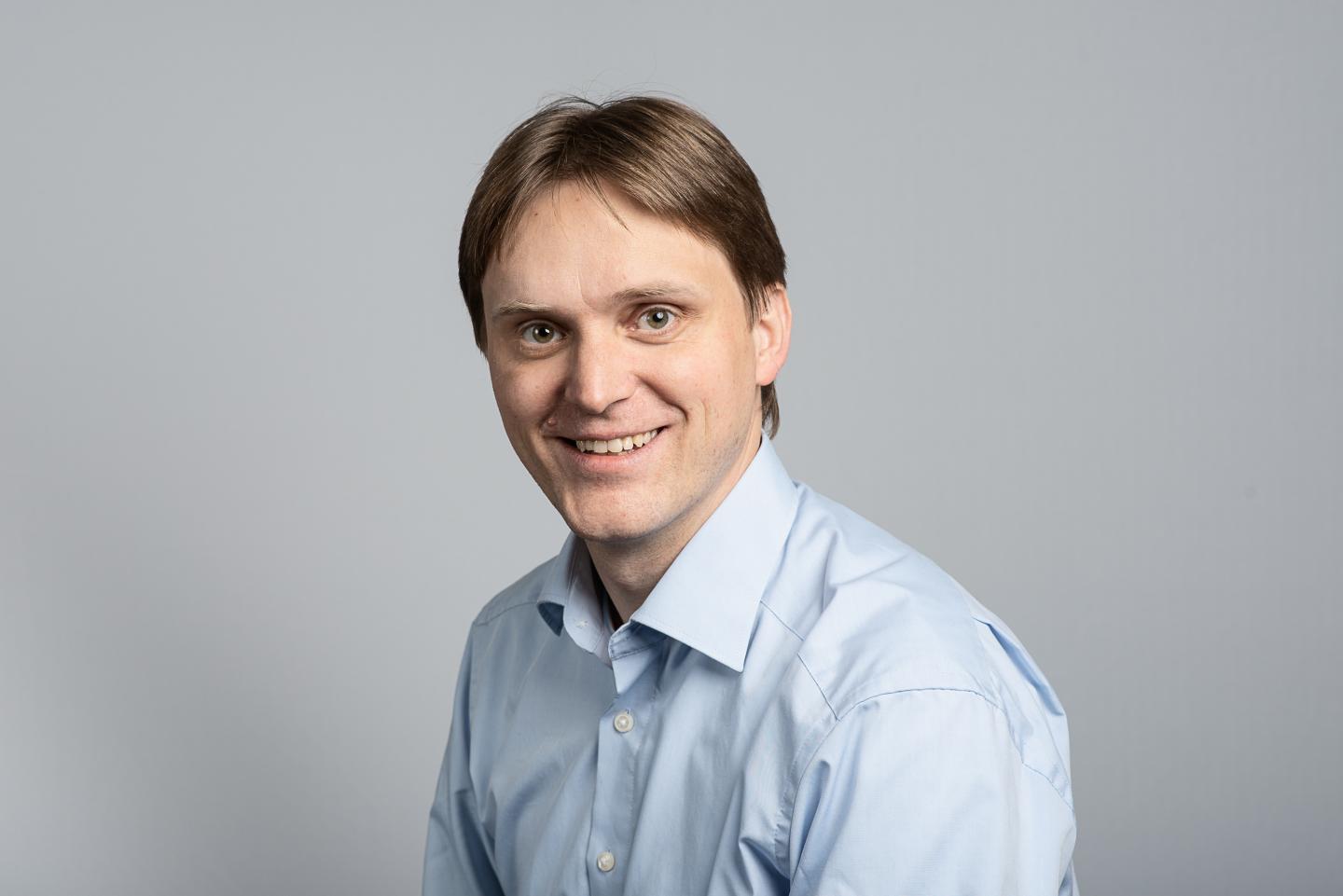 IMAGE: This is Associate Professor in Physics Richard Hildner of the Zernike Institute for Advanced Materials, University of Groningen view more

Photosynthetic systems in nature transport energy very efficiently towards a reaction centre, where it is converted into a useful form for the organism. Scientists have been using this as inspiration to learn how to transport energy efficiently in, for example, molecular electronics. Physicist Richard Hildner from the University of Groningen and his colleagues have investigated energy transport in an artificial system made from nanofibres. The results were published in the Journal of the American Chemical Society.

‘Natural photosynthetic systems have been optimized by billions of years of evolution. We have found this very difficult to copy in artificial systems,’ explains Hildner, associate professor at the University of Groningen. In the light-harvesting complexes of bacteria or plants, light is converted into energy, which is then transported to the reaction centre with minimal losses.

Five years ago, Hildner and his colleagues developed a system in which disc-shaped molecules were stacked into nanofibres with lengths exceeding 4 micrometres and a diameter of just 0.005 micrometres. By comparison, the diameter of a human hair is 50-100 micrometres. This system can transport energy like the antennas in photosynthetic systems. ‘But we sometimes saw that energy transport became stuck in the middle of our four micrometre-long fibres. Something in the system appeared to be unstable,’ he recalls.

To improve the energy transport efficiency, Hildner and his colleagues created bundles of nanofibres. ‘This is the same idea as that which is used in normal electronics: very thin copper wires are bundled together to create a more robust cable.’ However, the bundled nanofibers turned out to be worse at transporting energy than single fibres.

The reason for this lies in something called coherence. When energy is put into the molecules that make up the fibres, it creates an excited state or exciton. However, this excited state is not a packet of energy that is associated with a single molecule. Hildner: ‘The energy is delocalized over several molecules and it can, therefore, move fast and efficiently across the fibre.’ This delocalization means that the energy moves like a wave from one molecule to the next. By contrast, without coherence, the energy is limited to a single molecule and must hop from one molecule to the next. Such hopping is a much slower way to transport energy.

‘In the bundles, coherence is lost,’ explains Hildner. This is caused by the strain that the bundle imposes on each fibre within it. ‘The fibres are compressed and this causes side groups of the molecules to crash into each other.’ This changes the energy landscape. In a single fibre, the energy of the excited states of several neighbouring molecules are at the same level. In a bundle, the local environments of the molecules differ, leading to a difference in energy levels.

‘Imagine that you are on a bike tour. The height profile of the tour represents the energy levels in the molecules that make up the fibres,’ says Hildner. ‘If you are cycling in the Netherlands, you will arrive at your destination quickly because the terrain is flat. In contrast, in the Alps, you must cycle uphill quite often, which is tough and slows you down.’ Thus, when the molecules’ energy levels in the fibres are different, transport becomes more difficult.

This discovery means that the team’s original idea, to increase energy transport efficiency using bundles of nanofibres, turned out to be a failure. However, they have learned valuable lessons from this, which can now be used by theoretical physicists to calculate how to optimize transport in molecular fibres. ‘My colleagues at the University of Groningen are currently doing just that. But we already know one thing: if you want good energy transport in nanofibres, do not use bundles!’

Plants and photosynthetic bacteria catch sunlight via molecular antennas, which then transfer the energy to a reaction centre with minimal losses. Scientists would like to make molecular wires that can transfer energy just as efficiently. Scientists at the University of Groningen created tiny fibres by stacking certain molecules together. Single fibres transport energy, although they sometimes malfunction. Creating bundles of fibres (as is done with copper wiring) was thought to be the solution but this turned out not to be the case. Energy moves fast when spread out across several molecules. In single fibres, this works well but in bundled fibres, this spreading out is hampered as the molecules experience strain. These results can be used to better understand energy transport along molecular wires, which will help in the design of better wires. The Future for Australian Coal