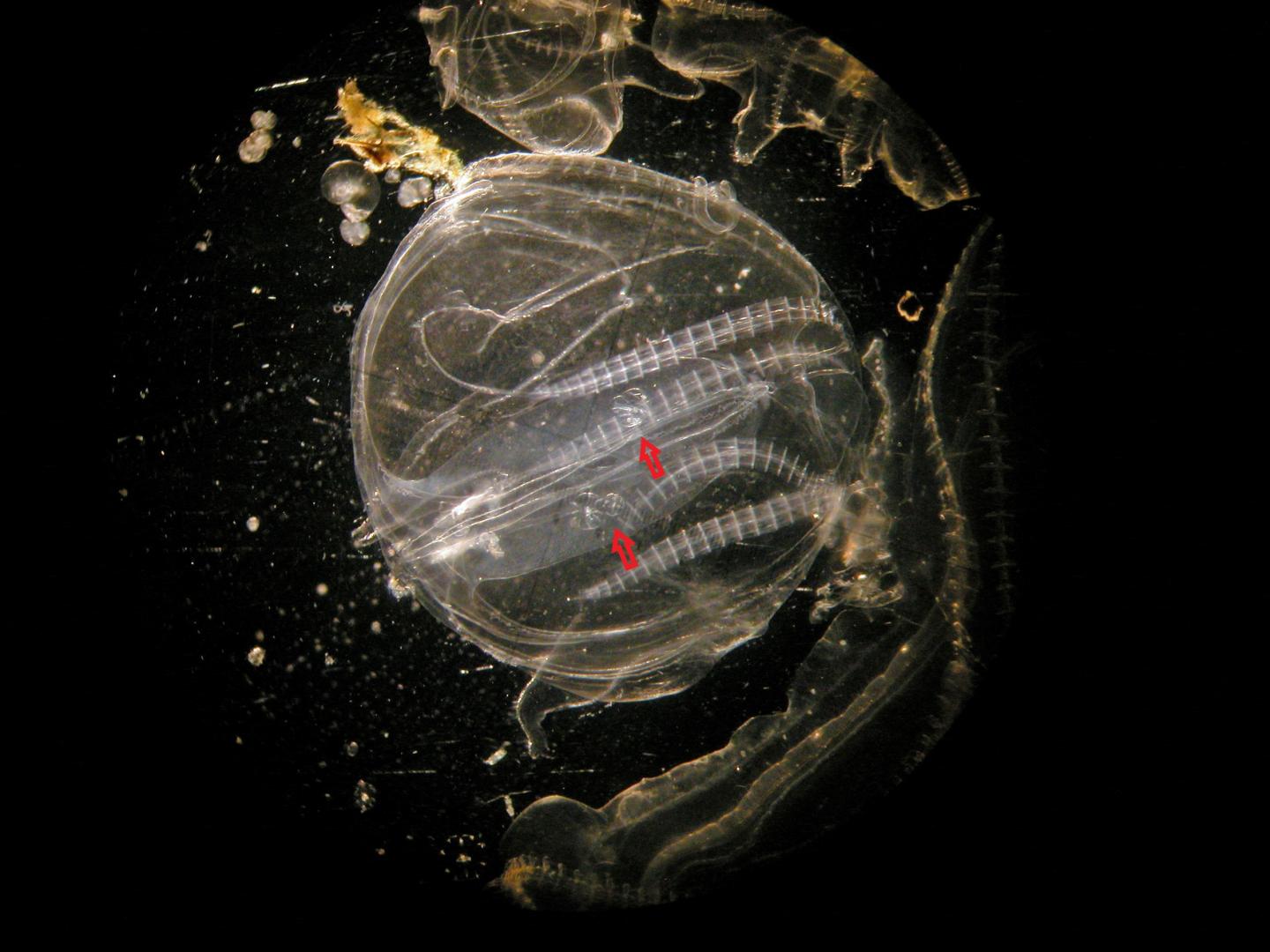 IMAGE: Photographic evidence of cannibalistic behavior; Mnemiopsis leidyi larvae (next to red arrows) within the auricles of an adult. view more

In a world where movements of non-native animal species are drastically disrupting whole ecosystems and causing economic harm and environmental change, it is becoming increasingly important to understand the features that allow them to colonize new habitats.

A new study, published in Communications Biology, shows that the prolific comb jelly, a marine invertebrate invader from North America that now frequently washes up on Baltic shores, is able to expand their geographical range thanks to the use of its own young as nutrient stores through long and nutrient deprived winters.

As jellies trace their lineage back to the beginning of all animal life, this work furthers the view of cannibalism as a pervasive trait amongst the animal kingdom.

With their translucent gelatinous bodies, they may not look like much, but the expansion of the comb jelly, Mnemiopsis leidyi, from the east coasts of North and South America to Eurasian coastal waters has wreaked havoc on local environments.

Their success has remained something of a mystery especially as, instead of storing resources before wintering, they seemed to counterproductively invest in massive ‘blooms’ of offspring unable to survive long and nutrient deprived winters.

It had been assumed that perhaps they were able to persist due to a lack of native predators, though both this, as well as the best conservation management strategies for this exotic species, have remained hazy.

A handy floating reservoir of food

That was until an international team of researchers, including authors at the University of Southern Denmark and the Max Planck Institute for the Science of Human History, performed the dedicated collection of comb jellies throughout the year at their northernmost range in the Baltic Sea off of northern Germany.

Lead author of the study, Jamileh Javidpour, Assistant Prof. at University of Southern Denmark states “we combined a study of the population dynamics of this species with experimental feeding and geochemical tracers to show, for the first time, that adult jellies were actually consuming the blooms of their own offspring”.

This rather sinister realization behind the function of these blooms makes perfect sense. As a handy floating nutrient reservoir that lasted beyond the collapse of normal prey populations, the release of offspring provided adults with an additional 2-3 weeks window of growth which, ecologically, can be the difference between life and death.

“In some ways, the whole jelly population is acting as a single organism, with the younger groups supporting the adults through times of nutrient stress”, says Thomas Larsen, a co-author of the study at the Max Planck Institute for the Science of Human History.

“Overall, it enables jellies to persist through extreme events and low food periods, colonizing further than climate systems and other conditions would usually allow”, he continues.

The novel data produced by the team may allow conservationists and governments to better combat the spread of these jellies which can disadvantage native species and bring local fisheries down. In their exotic ranges, the comb jellies have been particularly successful in seas impacted by rapid warming, overfishing and excessive nutrient loads.

Tackling these problems could potentially reduce the food sources for these gelatinous invaders and restore the ecological balance of Eurasian seas.

The study also suggests that this jelly may become a problematic species in its native ranges, with possible rapid bloom-and-bust cycles under the right conditions.

Was cannibalism an early trait?

This study also speaks to wider questions of cannibalism in the animal kingdom. Cannibalism has been recorded among over 1,500 species, including humans, chimpanzees, squirrels, fish, and dragonfly larvae.

Although sometimes cannibalism occurs during periods of extreme shortage or disaster, it can also occur under regular conditions.

“Because comb jellies trace their ancestry back to the beginning of most animal life as we know it during the Cambrian Period, 525 Million Years Ago, it remains possible that it is a basic, unifying feature across the animal kingdom”, Jamileh Javidpour concludes.

More research is certainly required to clarify the role of cannibalism among the earliest members of the animal kingdom and the evolutionary origins of cannibalism and the reasons why it is particularly prominent in aquatic ecosystems.

Nevertheless, these gelatinous critters have provided a calculating window into the use of this behaviour during the invasion of new habitats. While it may seem abhorrent to us, ‘investing in the future’ certainly has a very different meaning for these invertebrates!

Lead author Jamileh Javidpour is an Assistant Prof. at Department of Biology. Her research has since 2004 revolved around the ecological role of jellies on marine ecosystems including invasion ecology, developmental biology and deep-sea ecology. She is coordinating GoJelly, a Horizon 2020 project, which investigates innovative uses of jellyfish from combatting litter in the marine environment to reducing wrinkles in the face. https://portal.findresearcher.sdu.dk/da/persons/jamileh

Thomas Larsen is the research leader of the biochemistry laboratory at the Department of Archaeology, Max Planck Institute for the Science of Human History in Jena where he undertakes biochemical studies to characterize ecological phenomena and our human past. https://www.shh.mpg.de/person/94375/25522 Hear them roar: How humans and chickadees understand each other