Marine litter in the Bay of Biscay 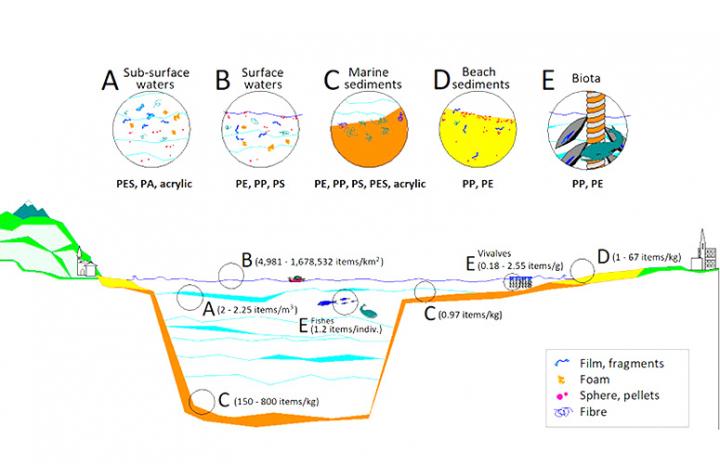 IMAGE: Marine sectors and principal polymeric materials of the microplastics in the Bay of Biscay view more

Microplastics constitute an environmental problem of growing concern, and various studies have identified the Bay of Biscay as an area where marine litter builds up. The research that has now been published establishes considerable variability in the spatial and temporal distribution of microplastics confirming their presence in over 50% of the water and sediment samples collected for analysis purposes.

These are plastic particles measuring less than 5 mm that are deposited in the seas and on the coasts as a result of the dumping of small-sized plastics used in certain products and applications (known as primary microplastics) or as a result of the breaking up of larger objects (secondary microplastics). Owing to the abundance of these particles in the marine environment, their origin, presence and influence on human health and species worldwide is being extensively investigated right now.

In terms of their nature, the polymers most found are polypropylene, polyethylene, polyester and polystyrene, which tally with the main plastics used worldwide. “The predominance of fragments and fibres in the results of the studies suggests that the microplastics in this region originate mainly from the breaking up of larger objects. However, the difficulty in comparing the various pieces of research owing to the different methodologies used in them is evident, so consensus needs to be reached on standardized methods for monitoring microplastics in the marine environment,” said the research group responsible for the study.

This study, published by the ‘Materials + Technologies’ research group (GMT) of the UPV/EHU’s Faculty of Engineering – Gipuzkoa, was produced by Amaia Mendoza within the framework of the PhD thesis she is writing up. Apart from the study of the situation of the research presented in the article, the aims of her PhD thesis include the characterisation of the presence of microplastics on various sandbanks off the coast of Gipuzkoa as well as in the waters of La Concha bay, for which the facilities of the Aquarium of Donostia-San Sebastian were used. In collaboration with Azti, the degradation undergone by various commercial plastics under actual marine conditions as well as the influence of this degradation on the subsequent management of this litter once it has been collected is also being investigated. The project is being supervised by Cristina Peña and the Department of the Environment and Hydraulic Works of the Chartered Provincial Council of Gipuzkoa is collaborating in it. Your Questions About Food and Climate Change, Answered Climate strike: thousands of students take to UK streets in call to stop global warming – as it happened