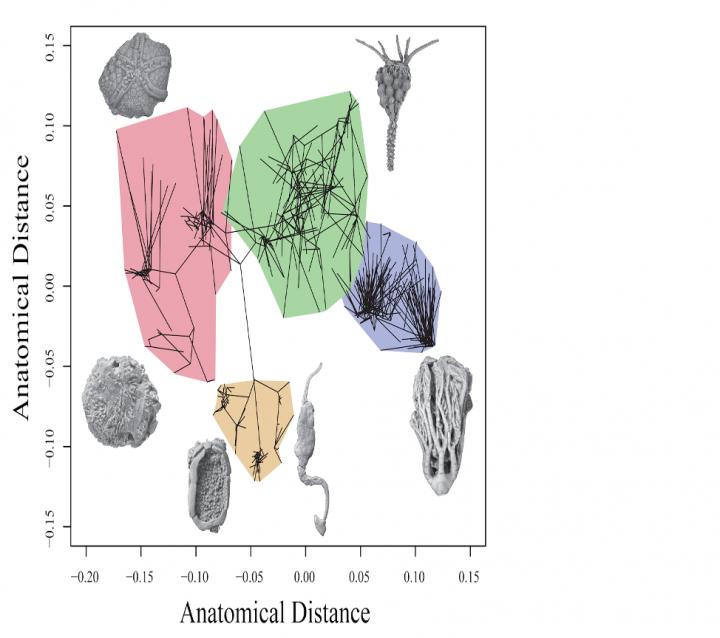 IMAGE: The hypothetical ancestral echinoderm is at the center of the graph with evolutionary pathways radiating outward during and following the Cambrian Explosion to establish the major echinoderm body plans from… view more

A new study by an international team of scientists has revealed the developmental and evolutionary mechanisms underlying the origin of a major phylum.

The Cambrian Explosion was a pivotal event in the history of life half a billion years ago with the sudden appearance of dozens of distinctive animal body plans. After this initial burst of innovation, the appearance of new body plans slowed to a halt. This pattern has puzzled and intrigued scientists and led to hypotheses regarding the ecological and developmental influences on animal evolution.

The study investigates the questions of whether this pattern resulted from abundant ecological opportunity early in the history of life, which became dampened with competition through time, or from evolutionary shifts in growth and development that limit evolutionary innovation through time.

Bradley Deline–lead author in the study, from the University of West Georgia (USA)–assembled a team of experts to address this question by compiling the vast anatomical features found within echinoderms.

This phylum that includes sea stars and sea urchins, was ideal for this study because it contains an incredible richness of forms and features, especially early in its evolutionary history.

“With this information, we can trace the evolution of complex forms and address fundamental questions regarding the mechanisms that govern the overall appearance of animals through time,” Deline said.

Scientists have argued that features defining animal body plans have become increasingly elaborate through time such that they become burdened by their own complexity. This burden could prevent change and would explain the lack of new phyla since the Cambrian Explosion.

Colin Sumrall from the University of Tennessee (USA), worked to integrate this wealth of information with a new and expansive evolutionary tree of early echinoderms. This showed the steady exploration of body plans through time that ultimately became distinctive with the extinction of transitional forms.

“This highlights the amazing complexity within echinoderms with so many groups arriving on similar solutions to become successful,” Sumrall explained. “There are many examples of echinoderms continuing to change dramatically long after the Cambrian Explosion.”

“We see no difference in the stability or evolutionary patterns in simple and complex features,” Thompson exclaimed. “Large-scale characters are flexible allowing echinoderms to routinely break through constraints allowing for continued evolutionary innovation.”

Therefore, based on the results of this study, the major factor limiting this vast potential for evolutionary change seems to be ecological opportunity rather than rigidly constrained developmental processes.

This study, along with work on modern animals, clarifies evolution and development during the Cambrian Explosion and beyond in which complex and burdened features retain flexibility enabling continued change and anatomical innovation in an ever-changing world.