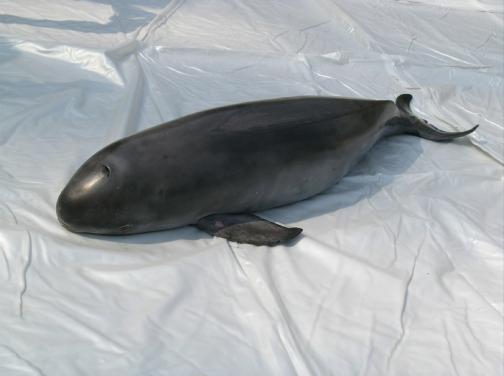 IMAGE: This is the body of a stranded finless porpoise (Neophocaena phocaenoides). view more

For years Professor Kenneth Leung Mei Yee from the HKU School of Biological Sciences and the Swire Institute of Marine Science and his research team, have been dedicated to the monitoring of toxic substances tribuyltin (TBT) and triphenyltin (TPT) compounds in our marine environment.

Globally, organotin compounds such as tribuyltin (TBT) and triphenyltin (TPT) have been widely used as antifouling agents on ship hulls and submerged mariculture facilities over the past decades. Hence, they are often detected in seawater, sediment and biota samples collected from coastal marine environments of urbanised coastal cities worldwide. At very low concentrations, these compounds can cause endocrine disruption or even death in marine organisms. The International Maritime Organisation (IMO) of the United Nations has implemented a global ban on the use of organotin compounds on the hull of sea-going vessels since 2008.

Together with their collaborators, Professor Leung’s research team discovered that despite a decline of TBT concentration in our marine environment in recent years, the levels of TPT contamination remained serious with an increasing trend. In addition to TPT contamination in seafood, the team’s recent research has also confirmed the occurrence of biomagnification of TPT compounds along the marine food chain, resulting in very high concentrations of TPT in two top predators, the Chinese white dolphin and the finless porpoises.

This is the first study in the world to confirm the trophic magnification of TPT in food webs of cetacean species, and the findings were recently published in Environment International.

TBT and TPT are highly toxic biocides which can cause growth inhibition to marine algae and mortality to many marine invertebrates and fishes at 1-50 μg/L*. At very low concentrations (1-10 ng/L**), these compounds can cause endocrine disruption in marine organisms such as growth retardation and shell thickening in oysters, and abnormal development of male sex organs on females of gastropods. TBT and TPT accumulate along the food chain in larger organisms such as fish, and may have an adverse effect on health when consumed by humans.

Professor Kenneth Leung and his research team have been monitoring organotin pollution in the marine environment of Hong Kong since 2004. They discovered that TPT contamination remained serious with an increasing trend. TPT had been found in our seafood and in some case, their concentrations (e.g. those in tonguefishes) exceeded the food safety limit for human consumption. In 2017, the Government of the Hong Kong Special Administrative Region finally established a new legislation (Cap. 413, section 3) to support the IMO’s global ban of using organotin compounds on vessels, and enhance the control of their release.

In order to fully understand the extent of the contamination, Professor Leung and his team have recently completed a follow-up research in collaboration with Xiamen University and the State Key Laboratory of Marine Pollution, to investigate the extent of TPT contamination in marine food webs in Hong Kong, and verify whether TPT and its degradation products (i.e., mono- and di-phenyltin; MPT and DPT) can be biomagnified through the food chain, leading to very high concentrations in local Chinese white dolphins (Sousa chinensis) and finless porpoises (Neophocaena phocaenoides).

The Chinese white dolphins prefer the inner estuary of the Pearl River Delta, while the porpoises have a greater home range from the southwest to the southeast waters of Hong Kong. Between 2015 and 2017, the study team obtained samples of stranded dolphins and porpoises from the Ocean Park Conservation Fund Hong Kong and collected samples of marine molluscs, crustaceans and fishes from waters at the northwest (i.e., inner estuary) and southwest (i.e., outer estuary) of Lantau Island, respectively. Muscle tissues of all biota samples were analysed for MPT, DPT and TPT using gas chromatography-mass spectrometry, and used for determination of trophic levels using a stable isotope ratio mass spectrometer.

Research findings showed that TPT was the predominant phenyltin compound in the marine mammals, indicating that contamination is an on-going issue. High concentrations of TPT were recorded in the muscle tissue of the Chinese white dolphins and the finless porpoises, with an average of 1,893.8 ng/g w. w. and 1,477.6 ng/g w. w. recorded respectively, even higher than the highest concentration of TPT ever reported in marine mammals the false killer whale worldwide (the false killer whale in Japan with 649 ng/g w. w.[1]). The highest concentration of TPT detected in an adult Chinese white dolphin in this study (3,476.6 ng/g w. w.) was five times higher than that of the false killer whale. At elevated concentrations, TPT can lead to sublethal adverse effects to the immune, nervous, cardiovascular and reproductive systems of mammals, resulting in a negative impact on the population fitness of these local dolphins and porpoises in the Pearl River Delta.

Alarmingly, this study also found that the highest TPT concentration in a juvenile finless porpoise (3,455.6 ng/g w. w.) was ten times higher than the highest value (310 ng/g w. w.) recorded in the same species collected from Hong Kong in 2003[2], indicating a worsening situation of TPT contamination.

Based on the results of stable isotope and chemical analyses, tissue concentrations of both DPT and TPT significantly increased with increasing trophic level of marine organisms in the food web of the Chinese white dolphins (i.e., inner estuary) while only TPT tissue concentration showed a positive relationship with the trophic level of the biota in the food web of the finless porpoises. For the Chinese white dolphins, trophic magnification factors (TMF) of DPT and TPT were found to be 6.03-11.48 and 2.45-3.39, respectively. For the finless porpoises, the TMF of TPT was found to be 2.51-3.47. When a TMF is greater than 1, it indicates that the chemical compound can be biomagnified through the marine food chain.

The results of the study suggest that high trophic organisms including humans are likely to be vulnerable to the exposure of DPT and TPT compounds via dietary intake due to the high trophic magnification potential of these chemicals. Therefore, environmental and human health risks of these compounds should be assessed with consideration of their biomagnification potentials along the food chain.

Regarding ways to reduce the health risk of TPT exposure, Professor Leung said, “The public should avoid and minimise the consumption of very large fishes such as sharks and Reeve’s croakers, and also benthic fish species such as the flathead and tongue sole fishes, as they probably contain high concentrations of TPT and other persistent organic pollutants in their tissues. Instead, they can consume crustaceans (e.g. shrimps and crabs), shellfishes (e.g. mussels, clams and oysters), and small fishes as an effective way to reduce the intake of TPT and other chemical contaminants.”

Dr James Lam Chung Wah, an environmental toxicologist and Assistant Professor at the Department of Science and Environmental Studies of the Education University of Hong Kong, who was not involved in the study, commented, “This interesting and impactful study led by HKU provided solid evidence of such a significant biomagnification of TPT along the marine food chain of marine mammals. Their results also highlight the greater impact of TPT on top predators in the sea and in humans through seafood consumption.” He also added, “To improve the current situation of organotin contamination, we must reduce their use and release at the source. Around the world, every government needs to play a part in strengthening the regulation and control of the use of toxic chemicals (like TPT compounds) in order to minimise their release into the environment.”

[1] Harino et al. 2007. Accumulation of organotin compounds in tissues and organs of stranded whales along the coasts of Thailand. Arch. Environ. Contam. Toxicol. 53: 119-125.

“Occurrence and trophic magnification profile of triphenyltin compounds in marine mammals and their corresponding food webs”, Environment International. Link to the article: https://www.sciencedirect.com/science/article/pii/S0160412019332635

Inclusion could be key to mainstreaming the climate emergency Can a Company Be Virtuous and Profitable? Nestlé Says Yes