News Corp finds someone to blame after pulling the plug on AAP (hint: it’s not News Corp) | Weekly Beast

The demise of AAP has unexpectedly ignited a war of words between media companies over who is to blame.

According to News Corp – one of the major shareholders who actually took the decision to close AAP – the shuttering of the vital news service is the fault of digital giants Google and Facebook … and the ABC and Guardian Australia. Wait. What?

In the fallout over AAP in the last few days, News Corp has used its significant real estate to attack both media organisations, with articles appearing in the Australian, the Daily Telegraph and other Murdoch titles shifting blame to competitors.

A page three story in the Australian on Friday accused Guardian Australia of “gobsmacking hypocrisy” for reporting that, along with the very compelling financial reasons for closing the service, News Corp and Nine told staff they no longer wanted to subsidise a breaking news service for their competitors. Neither News nor Nine have denied making the comments.

The AAP chairman, Campbell Reid, fired off a statement after the Guardian report saying it was “one of the very companies that slashed the amount it was prepared to pay for AAP”.

A senior executive for News Corp, Reid is also furious with the media union, the MEAA, for questioning News Corp’s motives for suddenly closing the wire service and throwing 600 people into unemployment.

“[The Guardian] is one of the organisations whose decisions have contributed to the closure of AAP and it and the [Media Entertainment and Arts Alliance’s] leadership should confront the bigger, tectonic forces our entire industry faces rather than trot out this arrant nonsense,” Reid thundered.

Guardian Australia’s editor, Lenore Taylor, who was not given a right of reply by the Oz, says: “We were offered a discount by AAP when we renegotiated last year because we were using fewer services as we expanded our own reporting teams.”

“Mr Reid’s statement is based on false premises,” Taylor said on Twitter. “No one at Guardian Australia has ever suggested the decision to close AAP was made primarily to hurt small media organisations. We have written that it was a commercial decision. We did publish what Mr Reid TOLD staff at AAP – that as well as commercial considerations, News and Nine felt they were propping up a news wire that helped competitors.” Then there was that other whipping boy, the public broadcaster. An editorial in the Daily Telegraph argued that Aunty’s free content was cutting their lunch.

“Additionally, AAP found itself competing with an ever-expanding ABC, which in defiance of the public good and media viability now dominates a great deal of the online realm through tax-funded content,” editor Ben English editorialised.

“The forthcoming loss of AAP will be a crushing blow to media diversity, brought about by behemoth organisations that care little for a plurality of sources.”

We know that News Corp is responsible for much of the climate denial published in the Australian media – no matter what Rupert Murdoch claimed – but now we have some hard data to put it in context.

First the good news. Reporting on bushfires is now far more likely to mention climate change, a study by Monash University has found.

The report from the Monash Climate Change Communication Research Hub, found that 49% of the media coverage of the recent bushfires mentioned climate change, compared with 5% of reports about Black Saturday in 2009. 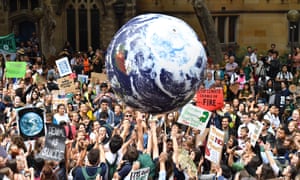 Of stories criticising protesters in rallies by school children and Extinction Rebellion, 84% were in News Corp papers. Photograph: Mick Tsikas/AAP

The researchers analysed 1% of articles between 1 September and 31 January and found only 5% of overall coverage featured climate denialism, down from 21% in 2009.

But it was News Corp publications that represented 59% of all the denialist discussion of climate change. The former Fairfax papers, now owned by Nine Entertainment, made up 19% of denialism.

The coverage of protests by school children and Extinction Rebellion showed that, of the 2% of articles that criticised the actions of the protesters, a whopping 84% appeared in News Corp.

The ABC wants the government to reverse its decision to impose an $84m indexation pause, an unlikely outcome with the details of cuts to staff and services due to be unveiled this month and no sign of the government softening.

But before the ABC managing director, David Anderson, could make a final plea to parliamentarians on Tuesday, the delicate behind-the-scenes negotiations between the communications minister and the ABC were leaked to the papers – twice.

A letter written by the communications minister, Paul Fletcher, to Anderson appeared in the pages of the Sydney Morning Herald. Fletcher had “strongly urged” the ABC to consider selling its capital city offices to cope with the $84m budget cut.

Anderson addressed the suggestion in Senate estimates later that day, saying the property portfolio had been examined many times and the idea was not new.

He also told senators the summer bushfires added an extra $3m in emergency broadcasting costs to the ABC budget at a time when the corporation had to absorb an ongoing annual budget cut of $105.9m.

That $105.9m figure represents all the cuts the Coalition has made to Aunty between 2014, when Tony Abbott promised no cuts to the ABC or SBS, and 2022, when the indexation pause ends.

The next day the Australian had another leaked letter, this time from Anderson to Fletcher. Anderson said if the government reversed the cuts the corporation would find $10m to fund additional regional services.

Alas, we’re digesting our own ‘indexation pause’ budget cuts .. $84 million over three years, more jobs in the industry will be lost. https://t.co/S1qHcGF6by

“If indexation was restored, combined with savings and efficiencies that the ABC has identified in recent months, the corporation would be in a position to commit an additional investment of up to $10m per annum to employ more journos in regional Australia and generate more content from regions for local and international stories,” the MD wrote.

With the defence minister, Linda Reynolds, angrily insisting it was an “indexation pause” and ABC executives saying it was a cut, we can’t see the negotiations being successful.

The ABC’s editorial director, Craig McMurtrie, was grilled at estimates about whether there had been any political interference in ABC News in relation to a report about sports rorts and another about a Rural Fire Service volunteer, Paul Parker, who told the prime minister to “get fucked from Nelligen” in a viral news clip.

ABC’s Media Watch revealed last month that a news story about Parker was filed for the ABC’s 7pm bulletin but didn’t run. Then the story was slated to run on News Breakfast, only that didn’t run either. ABC management told Media Watch it had nothing to do with politics and everything to do with “accuracy, newsworthiness and priorities”.

Why the ABC spiked an exclusive interview with the volunteer firefighter who abused the PM on national TV. #MediaWatchhttps://t.co/YaYWzg7xVz pic.twitter.com/CPWKrAM9XI

McMurtrie told senators the story didn’t run on the news bulletin because it was unclear whether he had been sacked or was stood down. At the next opportunity the story wasn’t run because the “news cycle had moved”, he said

“The important thing was that the newsroom had made the call and there was no pressure or intervention,” McMurtrie said.

What did emerge from the exchange was that Anderson has never had a call from Scott Morrison personally – but he has received emailed complaints from the PM’s office.

Anderson said the PMO emailed him about a story on the Lilli Pilli sports club, and after the story was examined it was amended and a correction published because it was based on a false assumption in a Facebook post. The story didn’t meet ABC editorial standards, McMurtrie said, and it had nothing to do with political influence.

“On 20 January, ABC News Online published a story that suggested the Lilli Pilli Soccer Club may have had prior knowledge of a Sport Australia grant for the second stage of the expansion of its clubhouse,” the ABC correction says. The ABC accepts that was not the case.”

Journalists snickered on Monday when a media release arrived in their inboxes trumpeting a world-first event: the first official KFC wedding.

Of course Australia’s first “KFC Wedding” was in #Toowoomba 🍗🍟…Super Rooster should have broken into this market already 👰🏻🤵🏻 details @WINNews_TWBA 6pm pic.twitter.com/5OpTNrhWE4

“Having had their first date in KFC in 2017, Kate and Harrison applied to the KFC Weddings competition in September last year and were the first lucky couple to be wed through KFC Weddings,” the media release said.

“Having won the competition for their take on the Fresh Prince of Bel-Air theme tune about their love, Kate and Harrison surprised 150 guests to the KFC Wedding complete with the KFC Food Truck, personalised buckets and Colonel themed celebrant and entertainer.”

However, the PR firm that sent out the release and their clients KFC had the last laugh. Multiple Australian and international outlets, including news.com.au, 7news.com.au, the Daily Telegraph, 10 Daily, Pedestrian TV, Toowoomba Chronicle, the Courier Mail and KIIS 1065 covered the stunt, complete with multiple pictures and video. Most stories had bylines, and some were even pay-walled. Expect more of this press-release journalism when AAP shutters in June.

Before we leave the subject of dumb press releases the great toilet paper shortage provided some publicists with priceless opportunities to flog their clients. We heard from one PR agent on behalf of a manufacturer of bidets. She wondered if Weekly Beast would like to interview him: “In light of the toilet paper shortage over coronavirus fears I thought you might be interested in talking about bidets”. The manufacturer could talk about: how bidet seats work – “they are often retrofitted on your existing toilet taking the place of the old toilet seat”; how they “provide a better clean than toilet paper and how they are eco-friendly”. Blaming Arctic Blasts On Global Warming Not Based On Science

Impacts: The hare and the tortoise