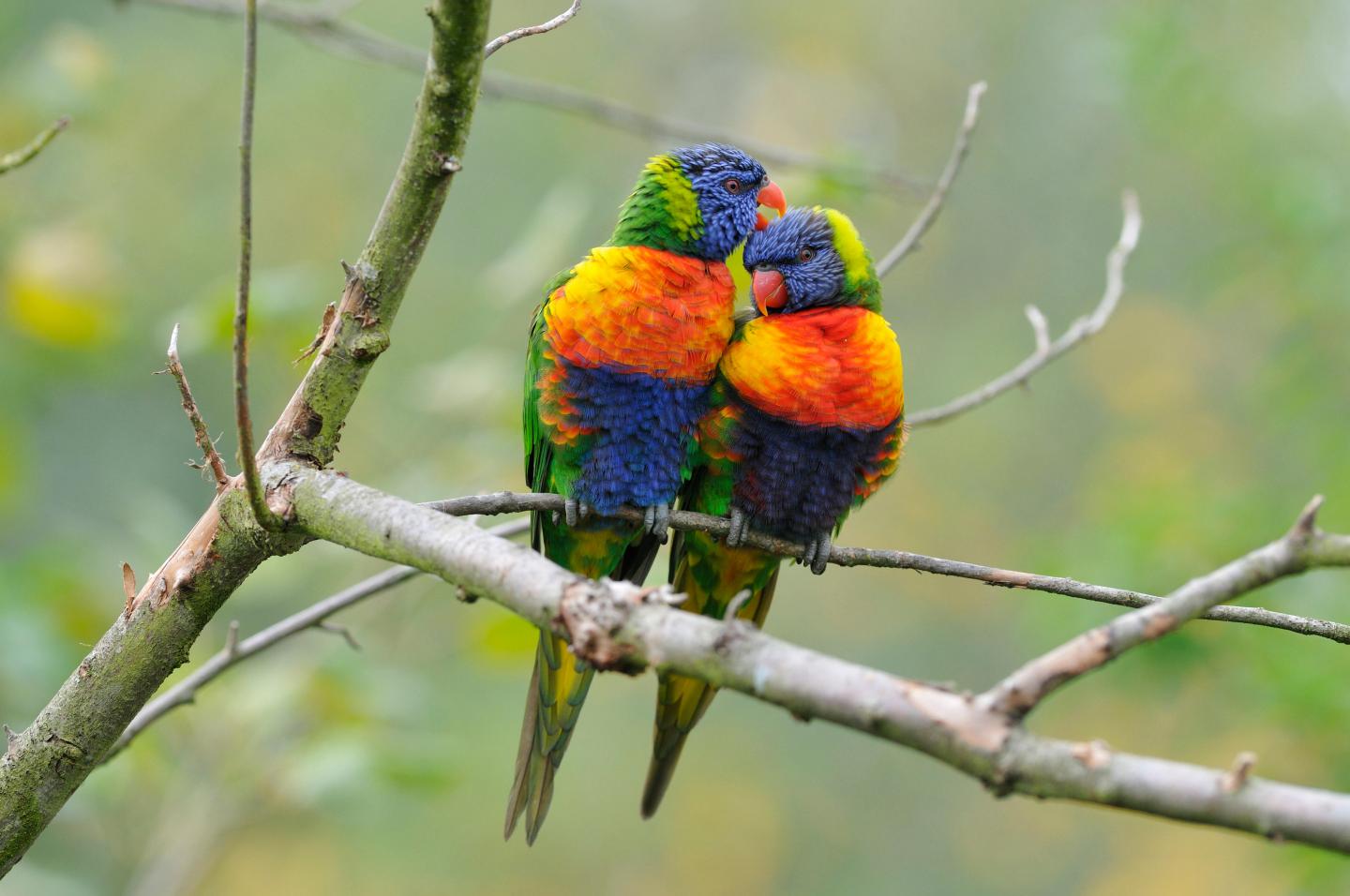 IMAGE: When looking for a mate, it may help each species to have different colors on the front, so they can find their own kind. view more

A new study examines how color evolved in one of the flashiest groups of parrots–Australasian lorikeets–finding that different plumage patches on the birds evolved independently through time. The study, published this week in the journal BMC Evolutionary Biology, helps explain why it’s possible for the birds’ faces and front sides to display a dazzling variety of colors–from vibrant ultraviolet blue only visible to other birds to deep crimson and black–while their wings and backs tend to be the same color: green.

“All birds need to balance being attractive to potential mates while having some kind of camouflage against potential predators,” said Brian Smith, an associate curator in the American Museum of Natural History’s Department of Ornithology and one of the co-authors of the new study. “So how do lorikeets, which have a very extreme appearance, get so colorful without being predated by lizards or hawks?”

To help answer this question, Smith and Jon Merwin, a Museum research assistant who began the project as a student at Columbia University, took visible-light and UV-light photos of 98 historic Museum specimens of Australasian lorikeets–those that live in New Guinea, Australia, and surrounding archipelagos–representing nearly all of the diversity in the group. Many birds can see in the ultraviolet spectrum, to which most humans are blind, so the researchers used a special program that translates color into “bird vision.” They collected data from 35 plumage patches on the birds across the face, head, back, wings, breast, and lower abdomen. Those color data were modeled within the tree of life for lorikeets to test whether different patches of the birds are more likely to evolve under certain scenarios.

They found that the plumage patches that are most likely to be involved in predation avoidance are greatly conserved across long evolutionary timescales while the patches that are likely involved in mate recognition or courtship evolved rapidly. The probable explanation is that when looking for a mate, it may help each species to have different colors on the front, so they can find their own kind. But while being hunted from above, it’s beneficial for the birds to blend in with the trees, so their backs may be adapted for camouflage and their colorful fronts for easy recognition.

In general, the researchers identified three plumage groupings that have evolved together through time: the face and head, the back and wings, and the breast region and lower abdomen. This so-called mosaic evolution–where subsets of traits evolve independently of others–underlies the extraordinary diversification of plumage colors seen in lorikeets today.

“The range of colors exhibited by lorikeets adds up to a third of the colors birds can theoretically observe,” Merwin said. “We were able to capture variation in this study that isn’t even visible to the human eye. The idea that you can take color data from Museum specimens, infer patterns, and gain a larger understanding of how these birds evolved is really amazing.”

Color evolution is a burgeoning topic in avian biology, with previous research conducted on birds of paradise and hummingbirds, and with a number of other studies in progress. Smith and Merwin plan to tackle the greater parrot group (Psittaciformes) next. Their lorikeet study will be featured in the Museum’s new exhibition The Nature of Color, opening to the public on March 9, 2020.

Glenn Seeholzer, a research associate in the Museum’s Department of Ornithology, is also an author on the paper.

ABOUT THE AMERICAN MUSEUM OF NATURAL HISTORY (AMNH)

The American Museum of Natural History, founded in 1869 and currently celebrating its 150th anniversary, is one of the world’s preeminent scientific, educational, and cultural institutions. The Museum encompasses 45 permanent exhibition halls, including those in the Rose Center for Earth and Space plus the Hayden Planetarium, as well as galleries for temporary exhibitions. It is home to New York State’s official memorial to Theodore Roosevelt, a tribute to Roosevelt’s enduring legacy of environmental conservation. The Museum’s approximately 200 scientists draw on a world-class research collection of more than 34 million artifacts and specimens, some of which are billions of years old, and on one of the largest natural history libraries in the world. Through its Richard Gilder Graduate School, the Museum grants the Ph.D. degree in Comparative Biology and the Master of Arts in Teaching (MAT) degree, the only such free-standing, degree-granting programs at any museum in the United States. Annual on-site attendance has grown to approximately 5 million, and the Museum’s exhibitions and Space Shows can be seen in venues on six continents. The Museum’s website, digital videos, and apps for mobile devices bring its collections, exhibitions, and educational programs to millions more around the world. Visit amnh.org for more information. Are Democrats Too Scared to Impeach?