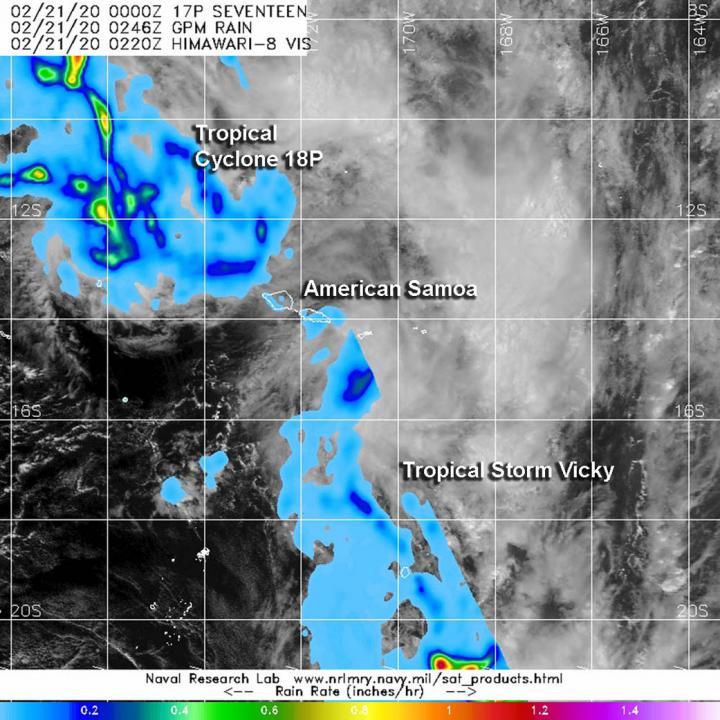 There are two tropical cyclones affecting American Samoa in the South Pacific Ocean on Feb. 21. Tropical Storm Vicky has triggered warnings, while Tropical Cyclone 18P continues to develop. The Global Precipitation Measurement mission or GPM satellite provided a look at the rainfall rates occurring in both storms.

The National Weather Service (NWS) in Pago Pago issued a Tropical Storm Warning on Feb. 21 for American Samoa, and coastal waters out to 40 nautical miles including National Marine Sanctuary of American Samoa.

In addition, a High Surf Warning remains in effect that states, “Hazardous surfs of at least 20 feet, with locally higher sets, will impact coastal waters, especially west through south facing shores of all islands due to the intensification of Tropical Storm Vicky south of the islands.” A Flash Flood Watch is also in effect for all of American Samoa.

The GPM’s core satellite passed over the South Pacific Ocean on Feb. 20 at 10:20 p.m. EDT (0220 UTC, Feb. 21). GPM found heaviest rainfall occurring in both Tropical Cyclone 18P and Tropical Storm Vicky, falling at rates of 1 inch (25 mm) per hour. Light rain appeared around those areas and throughout the rest of the tropical cyclones, falling at less than 0.2 inches (less than 5 millimeters) per hour.

Vicky is gradually weakening and the Joint Typhoon Warning Center expects it to weaken below tropical cyclone strength before passing near Niue within 24 hours.

GPM is a joint mission between NASA and the Japan Aerospace Exploration Agency, JAXA.

For updated forecasts from the NWS in Pago Pago, visit: https://www.weather.gov/ppg/?lang=english