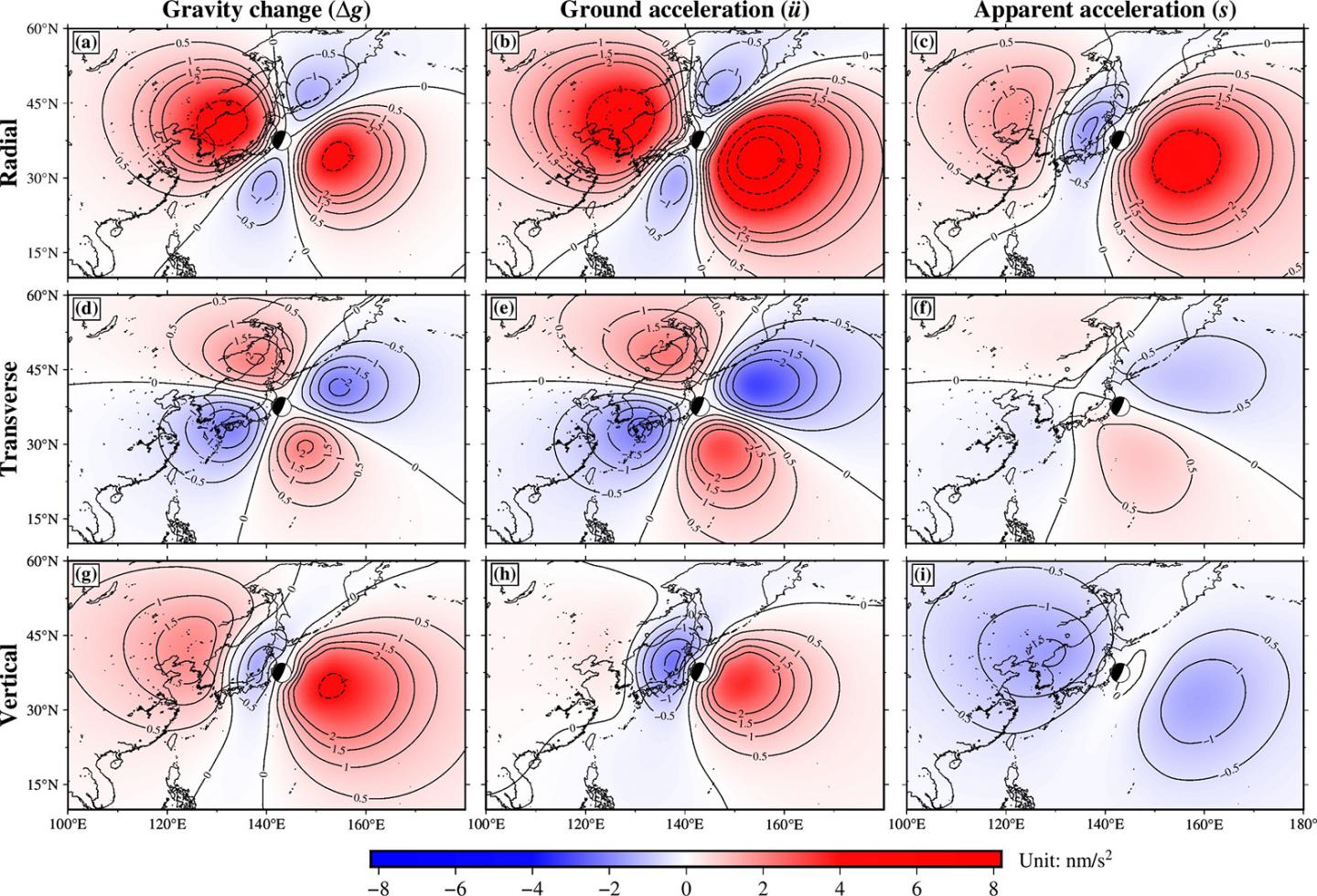 IMAGE: Spatial distribution of PEGS signal strength during the Tohoku quake in 2011, shortly before the arrival of the primary seismic wave. view more

Lightning – one, two, three – and thunder. For centuries, people have estimated the distance of a thunderstorm from the time between lightning and thunder. The greater the time gap between the two signals, the further away the observer is from the location of the lightning. This is because lightning propagates at the speed of light with almost no time delay, while thunder propagates at the much slower speed of sound of around 340 metres per second.

Earthquakes also send out signals that propagate at the speed of light (300,000 kilometers per second) and can be recorded long before the relatively slow seismic waves (about 8 kilometers per second). However, the signals that travel at the speed of light are not lightning bolts, but sudden changes in gravity caused by a shift in the earth’s internal mass. Only recently, these so-called PEGS signals (PEGS = Prompt elasto-gravity signals) were detected by seismic measurements. With the help of these signals, it might be possible to detect an earthquake very early before the arrival of the destructive earthquake or tsunami waves.

However, the gravitational effect of this phenomenon is very small. It amounts to less than one billionth of the earth’s gravity. Therefore, PEGS signals could only be recorded for the strongest earthquakes. In addition, the process of their generation is complex: they are not only generated directly at the source of the earthquake, but also continuously as the earthquake waves propagate through the earth’s interior.

Until now, there has been no direct and exact method to reliably simulate the generation of PEGS signals in the computer. The algorithm now proposed by the GFZ researchers around Rongjiang Wang can calculate PEGS signals with high accuracy and without much effort for the first time. The researchers were also able to show that the signals allow conclusions to be drawn about the strength, duration and mechanism of very large earthquakes. The study was published in the journal Earth and Planetary Science Letters.

An earthquake shifts the rock slabs in the earth’s interior abruptly, and thus changes the mass distribution in the earth. In strong earthquakes, this displacement can amount to several meters. “Since the gravity that can be measured locally depends on the mass distribution in the vicinity of the measuring point, every earthquake generates a small but immediate change in gravity,” says Rongjiang Wang, scientific coordinator of the new study.

“We faced the problem of integrating these multiple interactions to make more accurate estimates and predictions about the strength of the signals,” says Torsten Dahm, head of the section Physics of Earthquakes and Volcanoes at GFZ. “Rongjiang Wang had the ingenious idea of adapting an algorithm we had developed earlier to the PEGS problem – and succeeded.”

“We first applied our new algorithm to the Tohoku quake off Japan in 2011, which was also the cause of the Fukushima tsunami,” says Sebastian Heimann, program developer and data analyst at GFZ. “There, measurements on the strength of the PEGS signal were already available. The consistency was perfect. This gave us certainty for the prediction of other earthquakes and the potential of the signals for new applications.”

In the future, by evaluating the changes in gravity many hundreds of kilometres away from the epicentre of an earthquake off the coast, this method could be used to determine, even during the earthquake itself, whether a strong earthquake is involved that could trigger a tsunami, according to the researchers. “However, there is still a long way to go,” says Rongjiang Wang. “Today’s measuring instruments are not yet sensitive enough, and the environmentally induced interference signals are too great for the PEGS signals to be directly integrated into a functioning tsunami early warning system.” Why John Ruskin, Born 200 Years Ago, Is the Man of the Moment Is This Why Automakers Are So Slow To Electrify?