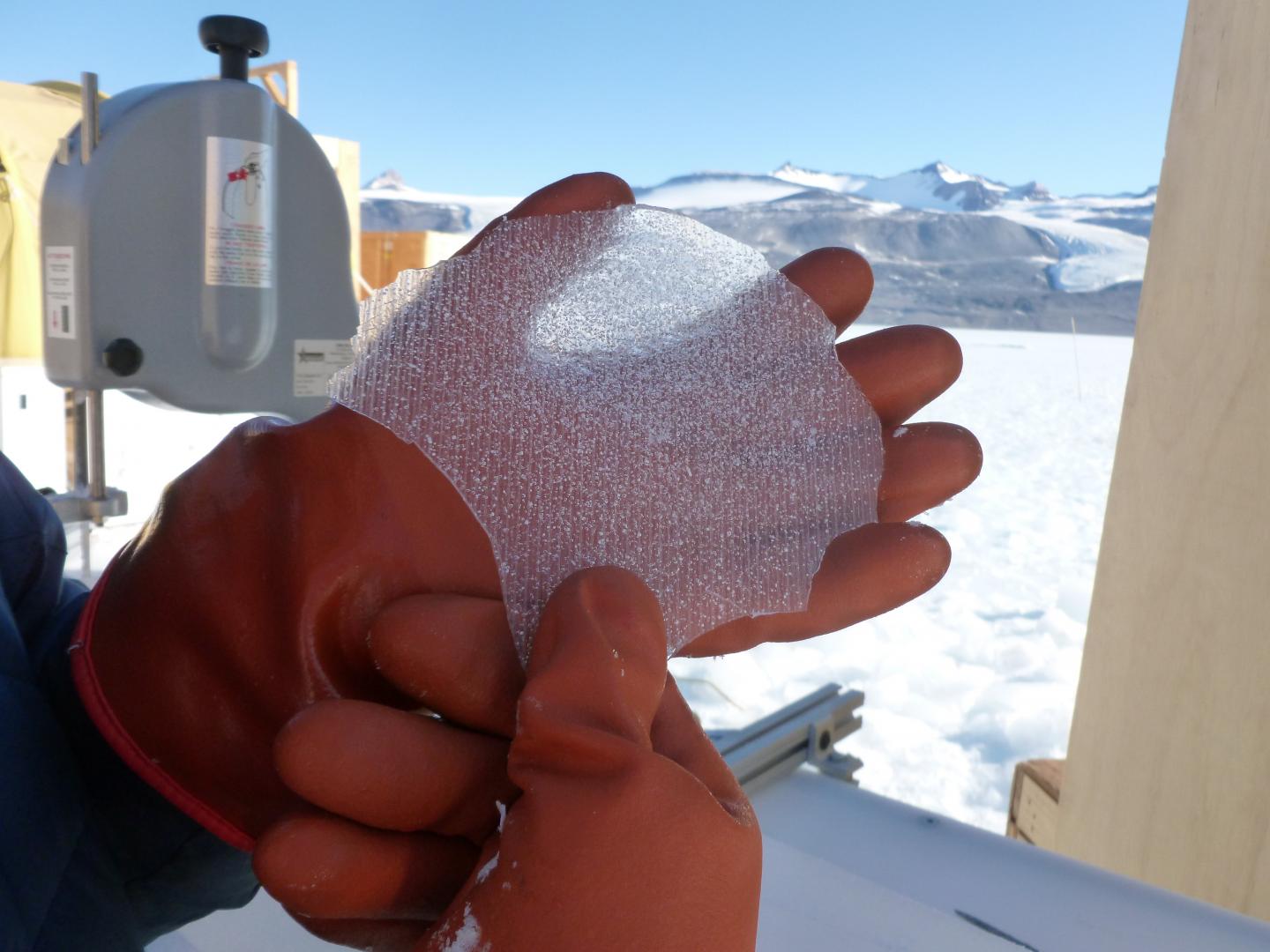 IMAGE: A thin section of an ice core collected at Taylor Glacier in Antarctica. The ice core samples contain tiny air bubbles with small quantities of ancient air trapped inside. The… view more

Permafrost in the soil and methane hydrates deep in the ocean are large reservoirs of ancient carbon. As soil and ocean temperatures rise, the reservoirs have the potential to break down, releasing enormous quantities of the potent greenhouse gas methane. But would this methane actually make it to the atmosphere?

Researchers at the University of Rochester–including Michael Dyonisius, a graduate student in the lab of Vasilii Petrenko, professor of earth and environmental sciences–and their collaborators studied methane emissions from a period in Earth’s history partly analogous to the warming of Earth today. Their research, published in Science, indicates that even if methane is released from these large natural stores in response to warming, very little actually reaches the atmosphere.

“One of our take-home points is that we need to be more concerned about the anthropogenic emissions–those originating from human activities–than the natural feedbacks,” Dyonisius says.

WHAT ARE METHANE HYDRATES AND PERMAFROST?

When plants die, they decompose into carbon-based organic matter in the soil. In extremely cold conditions, the carbon in the organic matter freezes and becomes trapped instead of being emitted into the atmosphere. This forms permafrost, soil that has been continuously frozen–even during the summer–for more than one year. Permafrost is mostly found on land, mainly in Siberia, Alaska, and Northern Canada.

Along with organic carbon, there is also an abundance of water ice in permafrost. When the permafrost thaws in rising temperatures, the ice melts and the underlying soil becomes waterlogged, helping to create low-oxygen conditions–the perfect environment for microbes in the soil to consume the carbon and produce methane.

“If even a fraction of that destabilizes rapidly and that methane is transferred to the atmosphere, we would have a huge greenhouse impact because methane is such a potent greenhouse gas,” Petrenko says. “The concern really has to do with releasing a truly massive amount of carbon from these stocks into the atmosphere as the climate continues to warm.”

In order to determine how much methane from ancient carbon deposits might be released to the atmosphere in warming conditions, Dyonisius and his colleagues turned to patterns in Earth’s past. They drilled and collected ice cores from Taylor Glacier in Antarctica. The ice core samples act like time capsules: they contain tiny air bubbles with small quantities of ancient air trapped inside. The researchers use a melting chamber to extract the ancient air from the bubbles and then study its chemical composition.

Dyonisius’s research focused on measuring the composition of air from the time of Earth’s last deglaciation, 8,000-15,000 years ago.

“The time period is a partial analog to today, when Earth went from a cold state to a warmer state,” Dyonisius says. “But during the last deglaciation, the change was natural. Now the change is driven by human activity, and we’re going from a warm state to an even warmer state.”

Analyzing the carbon-14 isotope of methane in the samples, the group found that methane emissions from the ancient carbon reservoirs were small. Thus, Dyonisius concludes, “the likelihood of these old carbon reservoirs destabilizing and creating a large positive warming feedback in the present day is also low.”

Dyonisius and his collaborators also concluded that the methane released does not reach the atmosphere in large quantities. The researchers believe this is due to several natural “buffers.”

BUFFERS PROTECT AGAINST RELEASE TO THE ATMOSPHERE

In the case of methane hydrates, if the methane is released in the deep ocean, most of it is dissolved and oxidized by ocean microbes before it ever reaches the atmosphere. If the methane in permafrost forms deep enough in the soil, it may be oxidized by bacteria that eat the methane, or the carbon in the permafrost may never turn into methane and may instead be released as carbon dioxide.

“It seems like whatever natural buffers are in place are ensuring there’s not much methane that gets released,” Petrenko says.

The data also shows that methane emissions from wetlands increased in response to climate change during the last deglaciation, and it is likely wetland emissions will increase as the world continues to warm today.

This study was supported by the US National Science Foundation and the David and Lucille Packard Foundation. It’s the End of California as We Know It