‘The worst thing is the waiting’: flood-hit communities tell of stress

Flooding not only wrecks businesses, destroys homes and disrupts everyday life but also causes long-lasting and dangerous levels of stress, residents from flood-hit communities have said.

Hundreds of homes have been flooded and six people are thought to have died across England and Wales after heavy downpours and successive storms further exposed the fragility of flood defences and the gravity of the climate emergency.

More flooding is expected as river levels continue to threaten to breach barriers. People in flood-hit areas are grappling with a seemingly relentless onslaught of extreme weather conditions, and are making preparations for the future while having to deal with the present consequences.

“I am lucky, only one room of my house was flooded, but some people have had to leave everything,” Amanda Gillender, a 71-year-old painter from Eardisland on the River Arrow in Herefordshire, told the Guardian. 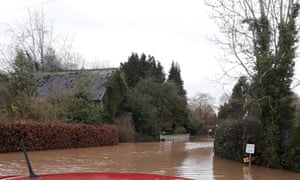 The scale of the flooding in Gillender’s village has been unprecedented and there are record levels of water in rivers nearby. She fears life there may become untenable if the climate crisis is not taken seriously. But for now, her most immediate concern is dealing with her insurance claim as she assesses the damage to her 500-year old cottage.

“The worst thing about flooding is the waiting and watching as the water rises foot after foot deep,” she said. “There’s nothing you can do. Once it has happened you’re completely isolated because you can’t go out and are left alone with the painful, disruptive aftermath.”

Elsewhere, the cumulative stress is having a grave impact on communities. “There are thousands of small human stories of stress, worry and disappointment,” said Rachel Buchanan, from the Ludlow area in Shropshire. “We’re all looking at river level websites now before going out. It just makes everyone a little less willing to leave their home.”

People are being prevented from getting to work and social events, caring for family members and attending to livestock, and are becoming ever more lonely, Buchanan believes.

“You become slightly more isolated as the effects of the flooding encroach on everyday life,” she said. “A friend of mine who is a single mother simply won’t go out now. Small businesses are losing a day or a week of work and the roads are crumbling – it’s a mess.”

All across the UK, flooding has become more frequent and the impact can be felt years later. While insurance agents visit to assess how much compensation is to be paid out, houses in areas not previously classified as being at risk of flooding are revalued.

“One of our neighbours lost £70,000 in value,” says Ian Young, a father of two who lives with his partner on the Isle of Man and who was affected by flooding last year. “We lost both our cars and did not receive market value for them. Our premiums went through the roof as they had to go down as at-fault claims even though the vehicles were parked on the driveway and we weren’t in them.”

He and his family have been living in temporary accommodation since the beginning of October and work to repair his property, the ground floor of which was completely flooded, has only just begun.

“It was absolutely horrific,” he said. “You spend years trying to build up your life centred around your home and garden and then you’re kicked out. We’ve lost a Christmas with our kids. They only believe in Father Christmas until they’re eight or nine. But it was a write-off not having our own home.”

In Surrey, where the Thames flooded twice in 2014, residents are still dealing with the consequences. “I don’t think we ever fully recovered from the experience,” said the fluid dynamicist and racing boat maker Carl Douglas. “It knocked the momentum out of us, left us poorer and messed up our business.” 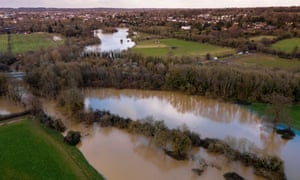 Receiving an adequate payout from his insurers proved an “incredibly stressful” ordeal that he knows was not unique to himself, and in 2015 he developed circulatory problems that forced him to have a triple bypass operation.

“The surgeon looked at me and said: ‘You look pretty fit for your age so I wouldn’t have expected you to need this procedure. But have you been under a lot of stress?’ ‘Oh yes,’ I replied,” Douglas said.

In many cases, communities have pulled together to help those who are most affected. In Hebden Bridge in West Yorkshire, which has been hit by flooding over the last couple of years, neighbours have responded by helping older people move their possessions to safety, sharing route information on Facebook, offering spare bedrooms and helping to flood-proof homes.

But people such as Rory Deighton, a 49-year-old NHS worker, are looking towards Westminster for real action. “If we get nothing again from a central government that ignores climate change, does not act on grouse shooting or discuss farming practices, and does not focus on how we can prevent flooding, then people will just ask: what’s the point?” Colourful male fish have genes to thank for their enduring looks