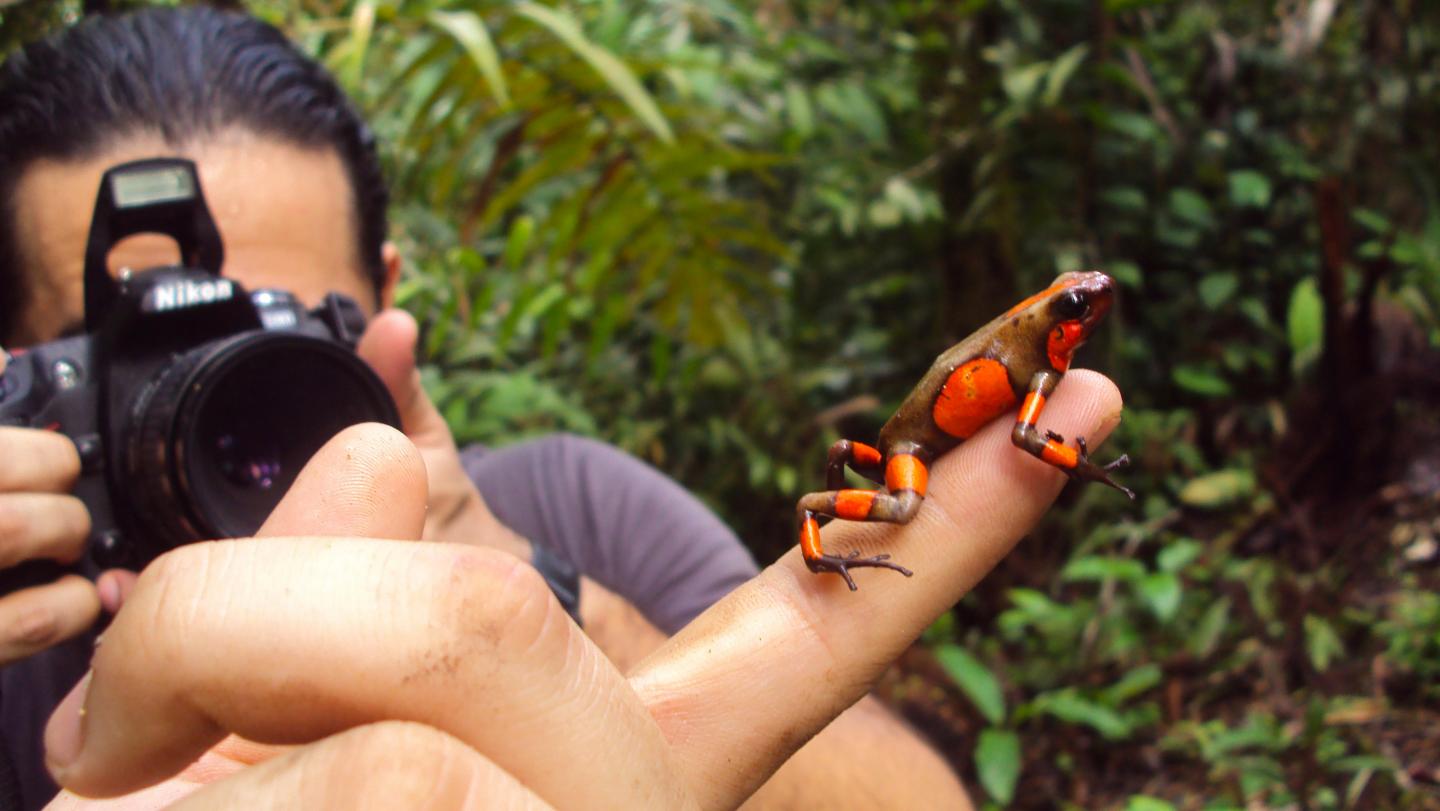 The origin of an understudied hybrid population of poisonous frogs–highly endangered colorful animals that live deep in the Colombian jungle–is the result of natural breeding and not caused by wildlife traffickers moving them, a University of Saskatchewan (USask) study shows.

“We found that these unique hybrid frogs appeared more than 20 years ago–before they became the target of illegal trafficking–and live only in a small patch of jungle,” said USask biology researcher Andrés Posso-Terranova. “Our study will help the Colombian government understand what these frogs are and why they need to be saved and preserved.”

The study, recently published in the journal Molecular Ecology, shows that the hybrid frogs are interbreeding between two known “pure” species–Oophaga anchicayensis and the critically endangered Oophaga lehmanni. The USask findings indicate that the hybrids do not pose a genetic threat to the other frog species but rather co-exist healthily with the “parent” populations.

“These hybrid frogs aren’t a threat to the other two species, but benefit the ecosystem as a healthy addition to the genetic diversity of the tropical rainforest,” said Posso-Terranova. “Genetic variation usually ensures stronger, more disease-resistant populations, both animals and plants. That’s why it’s important to preserve these frogs.”

Poison frogs are highly sought on the international black market and collectors love them for their amazing variation in colors and patterns. Each frog is worth up to $2,000, which prompts local impoverished people to sell them to traffickers. But the Colombian government is campaigning with locals to offer alternative income sources that could stop the trafficking.

The bright colors of the frogs provide a warning cue to predators that they are poisonous, a feature that comes from a diet of toxic bugs. The frogs’ color patterns also indicate where the species originate because they change depending upon the area of the Chocó jungle in which the frogs live. The hybrids of the USask study show distinct color patterns that mix those of both the “parent” species.

Noticing the uniqueness of these frogs, the researchers photographed and took tissue samples of more than 170 frogs to classify them. Back at USask, they used state-of-art genetic tools to study the frogs’ genome–up to three times larger than the human one–showing that the gene flow between the hybrid and the other two groups of frogs is limited. This means they all keep living along with one another.

Posso-Terranova said that this is not a case where the hybrids start breeding with the “parent” species, eventually making them disappear. The hybrids are instead the outcome of a natural breeding process.

The researchers found that one species lived at a higher altitude than the other, and probably they eventually expanded and started mixing with each other.

“If traffickers had moved some of the frogs from a different part of the jungle, the genetic results would show that the breeding was recent, but our findings indicate that this has happened for longer than one or two generations,” said Posso-Terranova.

Clarifying that the process has happened naturally is important for the conservation of these frogs, because policies tend to preserve pure species over the hybrids when humans are the cause of the hybridization.

The research was funded by the federal agency NSERC and a Colciencias grant from the Colombian government.

For news media only: ‘Greta Shaming’: Scowling Greta Coming To A Kitchen Near You