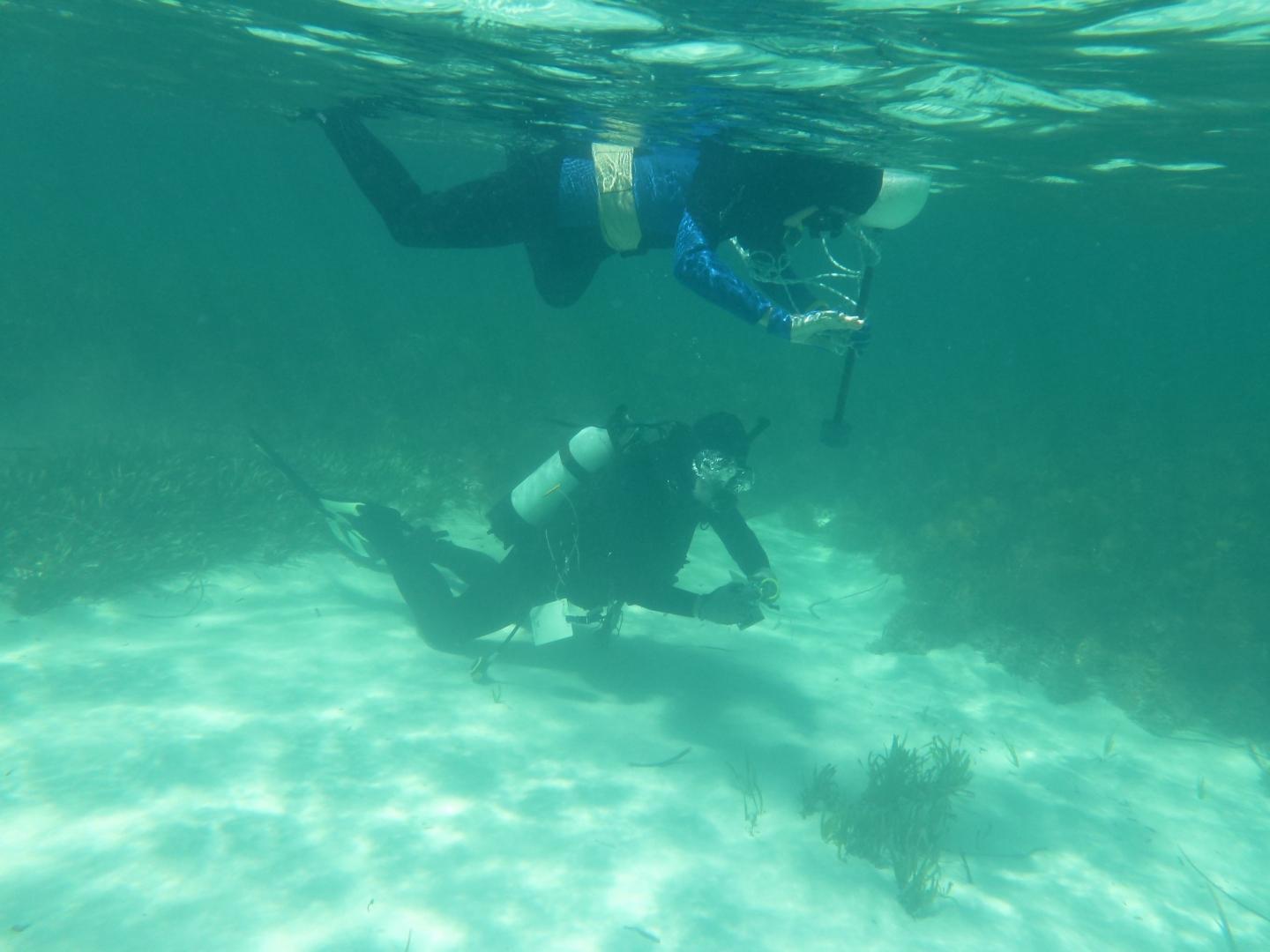 IMAGE: Drs. Robert “JJ ” Orth (at surface) and Gary Kendrick use SCUBA to study seeds of the seagrass Posidonia along the coast of Western Australia. view more

Seagrasses have long been known as some of Earth’s most remarkable organisms–descendants of flowering land plants that have re-colonized the ocean by developing traits that allow them to grow, pollinate, and release seeded fruits while fully immersed in salty seawater.

Now, research by a joint Australian-U.S. team reveals that one group of seagrasses, Australian species of the genus Posidonia, have evolved yet another remarkable adaptation for ocean survival: a winged seed whose shape harnesses the force of underwater currents to hold it on the seafloor for rooting.

Results of the study offer valuable insights for efforts to restore seagrass populations in Australia, the Chesapeake Bay, and elsewhere. Seagrass meadows, which provide important nursery and feeding habitat for other marine life and play a key role in maintaining water quality, are under threat worldwide from warming and over-fertilization of coastal waters.

Published in a recent issue of Scientific Reports, the seagrass study is the first to record a winged seed among marine angiosperms, and to experimentally determine its adaptive benefit. It also shows that seeds of Posidonia species in areas with stronger currents have larger wings, further evidence of the trait’s utility.

Lead author on the report was Dr. Gary Kendrick of the University of Western Australia. The research emerged from a long-term collaboration between Kendrick and Dr. Robert “JJ” Orth of William & Mary’s Virginia Institute of Marine Science, a pioneer in monitoring and restoring seagrasses in the Chesapeake Bay and mid-Atlantic coastal lagoons. Also contributing to the study were Marion Cambridge, Jeremy Shaw, Lukasz Kotula, and Ryan Lowe of UWA and Andrew Pomeroy of the Australian Institute for Marine Science.

“Understanding the basic biology of seeds and their establishment allows us to optimize our seed-based restoration practices,” says Kendrick. “Working with JJ and the team at VIMS–using their deep understanding of the world the seed experiences–has resulted in a truly interdisciplinary outcome that combines the skills of seagrass and restoration biologists, plant anatomists, and hydrodynamic modelers.”

Winged seeds are commonly used by land plants for dispersal by wind, with the helicopter-like seeds of maple and ash trees a familiar example. So when Orth first noted the wing-like structure on Posidonia seeds during Australian fieldwork in the mid-1990s, his initial thought was that it served a similar function.

“My preliminary hypothesis was that [the wing] would serve to move the seed farther away from the parent plant when it was released from the fruit,” says Orth. Posidonia produces large buoyant fruits that break off from the adult plant and can float kilometers away, releasing seeds as they mature.

But years of painstaking research showed the opposite. “When released from the fruit,” says Orth, “the seeds drop really fast.”

Based on that finding, Orth and colleagues developed a second working hypothesis, that the purpose of the wing was to get the seed to the bottom quickly, before it could be eaten by predators. But field research again proved them wrong. “It turns out not many creatures like to eat these seeds, except for crabs and other small crustaceans,” says Orth.

The third time’s the charm

The researchers’ path to discovering the wing’s true function began when Dr. Marion Cambridge of UWA’s Oceans Institute suggested a third hypothesis–that the wing keeps the seed at the sediment surface until it can grow anchoring roots.

To test this hypothesis, the team carefully measured the surface area of the seeds using both scanning electron microscopy and X-ray tomography, gauged the flow of currents around seeds placed in a flume, and used these data to build a computer model of the relevant hydrodynamic forces.

“When we brought in Andrew [Pomeroy], a hydrodynamics expert, he got pretty excited about what he saw,” says Orth. “He launched the modeling effort that’s highlighted in the paper. Together with our microscopy and flume data, it clearly supports the idea that the wing helps the seed maintain its position on the bottom, very similar to how flatfishes can stay on the bottom in strong currents.”

In sum, rather than helping to lift and disperse the seeds as with maples, the team’s research shows that evolution has engineered the Posidonia wing to push the seed against the seafloor, like the downforce generated by the wing on the rear of a race car.

Further support for the team’s hypothesis comes from their comparison of wing width in the seeds of Australia’s three Posidonia species, which inhabit a gradient of coastal habitats from current-scoured open shorelines to more sheltered bays.

“The neatest thing about the project,” says Orth, “is that the width of the wing differs in the three species that dominate the west coast of Australia, and correlates with each species’ environment. Posidonia coriacea, which lives in the most wave-swept areas, has the widest wing, while the other two species –australis and sinuosa–live under calmer conditions and have smaller wings.” This correlation extends all the way to the quiet waters of the Mediterranean, where a relict population of the same genus (P. oceanica) has seeds with barely any wing at all.

The findings have important implications for seagrass restoration. “Our modeling work and experiments will better inform Australian resource managers on where to place seeds of these different species,” says Orth. “Hopefully armed with this information we can increase the low success rate we observed from one of our recent large-scale restoration efforts in Cockburn Sound.”

The findings have also further piqued Orth’s interest in traits exhibited by the eelgrass seeds that have long been at the heart of his team’s restoration efforts in Virginia’s seaside bays. Orth and colleagues first began sowing the bays’ shallow waters with eelgrass seeds in 1999. Barren at the time, they today hold more than 7,000 acres of lush eelgrass meadow, making them the largest example of seagrass restoration in the world. In fact, they now hold 75% of the world’s restored seagrass acreage.

“We’ve conducted a lot of experiments with our eelgrass seeds,” says Orth, “but still know relatively little about the function of the ribs on these seeds and whether their barrel shape might play some role in keeping them from rolling along the bottom. Our work with Posidonia has added new intrigue to this work.”