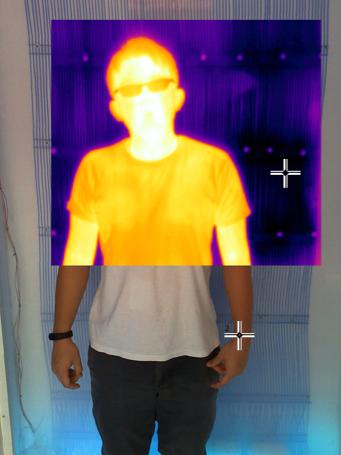 IMAGE: As shown by a thermal camera, the person is cool when standing in front of a radiant cooling system. view more

Standard comfort measurements used to design buildings’ heating and cooling systems share a common flaw, according to new research. The researchers said the findings could mean that designers have relied on inaccurate measurements for decades when building their systems.

In findings reported February 14 in the journal Scientific Reports, the researchers said the error was caused by the standard instrument used to measure temperature effects of radiant heating and cooling. The instrument, called a globe thermometer, and associated formulas used to calculate comfort based on the sensor’s readings do not properly account for air flow called free convection. In experiments, the failure led to temperature errors of more than two degrees Celsius, the researchers said.

Forrest Meggers, an assistant professor at Princeton University’s Andlinger Center for Energy and the Environment and one of the lead researchers, said the team uncovered problems with traditional measurements while building an outdoor exhibit in Singapore. While the team had no issues keeping the exhibit participants comfortable using a radiant cooling system, using standard measurement techniques, the team had difficulty demonstrating these cooling effects.

Meggers, also an assistant professor of architecture, said designers take basic measurements with the globe thermometer and use formulas to determine how the radiant system affects occupant comfort levels in various environments. Although the participants remained comfortable and the system was able to keep them feeling cool, the calculations showed the system was not working and that the environment should feel uncomfortable.

“That’s when we realized the formula was wrong. We had a hard time accepting it,” Meggers said.

The notion of using radiative heat exchange cooling or heating walls and surfaces to keep people nearby comfortable has been identified as an energy efficient design feature, but air conditioning is still the primary solution for keeping people comfortable in buildings in the United States and other places. Radiant systems have not always been seen as effective. The researchers say this miscalculation could help to explain why. Understanding and effectively capturing the impact of radiant systems on comfort can have a major impact on energy savings. Letting the air reach five degrees warmer while cooling surfaces, the researchers say, can lower cooling demand by up to 40% and maintain occupant comfort.

As investors demand action on sustainability, Europe leads the way

Shake it up: A Q&A with Sarah Pool, co-founder of upcycled spent grain protein shake company

A year of resistance: How youth protests shaped the discussion on climate change