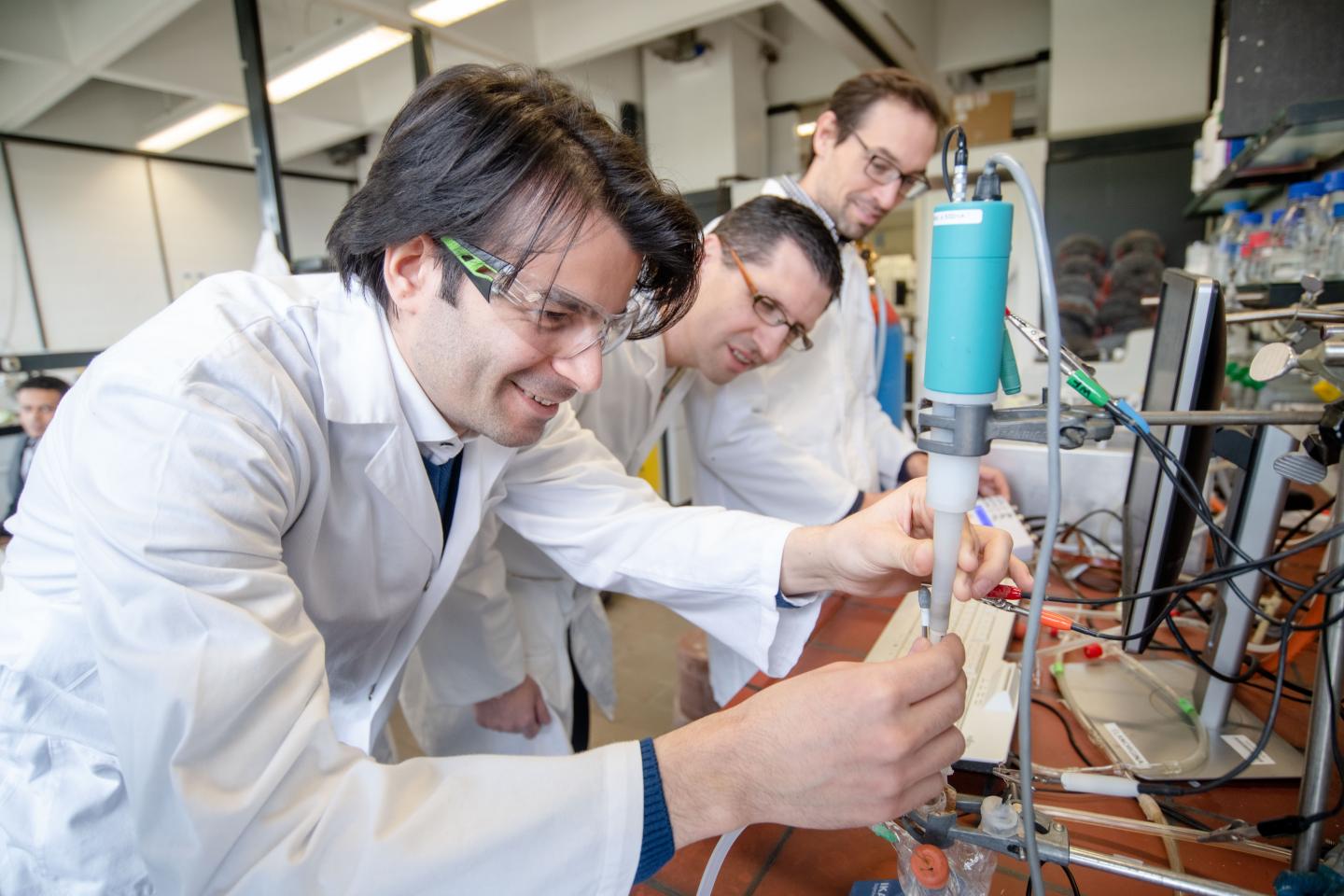 Contrary to theoretical predictions, oxygen inactivates biocatalysts for energy conversion within a short time, even under a protective film. A research team of the Resolv Cluster of Excellence at Ruhr Universität Bochum (RUB) has found out why: Hydrogen peroxide forms on the protective film. The addition of iodide salts to the electrolyte can prevent this from happening and considerably extend the life of the catalysts. The team around Professor Nicolas Plumeré from Resolv, Dr. Erik Freier from the Leibniz Institute for Analytical Sciences Dortmund and Professor Wolfgang Lubitz from the Max Planck Institute for Chemical Energy Conversion in Mülheim reports its findings in Nature Communications of 14 February 2020.

Biological and bio-inspired catalysts are available in abundance and their catalytic performance is close to that of precious metal catalysts. Nevertheless, they are not widely used for energy conversion processes. The reason for this is their instability. “Some of the most active small molecule conversion catalysts relevant to sustainable energy systems are so sensitive to oxygen that they are completely deactivated within seconds when they come into contact with it”, explains Nicolas Plumeré.

Infinite protection – so far only in theory

The research group had recently discovered that redox-active films can protect bio-inspired and even biocatalysts such as hydrogenases against this. Theoretical models predict that protection against oxygen should last indefinitely. In experiments, however, this protection has so far only been effective for a few hours. “This contradicts our theoretical calculations and cannot be explained, even in view of the lifetime of the same catalyst in an oxygen-free environment”, says Plumeré. The latter is up to six weeks with constant turnover.

Combination of methods explores the problem

This led the researchers to conclude that either the mechanism for protection against oxygen is not yet understood, or that apart from deactivation by oxygen, additional harmful processes take place. To investigate this, they combined various methods that allowed them to examine what happens in the protected layer in detail. The combination of confocal fluorescence microscopy and coherent anti-Stokes Raman scattering performed in the laboratory by Erik Freier, with electrochemistry for the analysis of the protective matrix showed: The protective process leads to an accumulation of hydrogen peroxide, which promotes damage to the catalytic film.

We show that the decomposition of hydrogen peroxide with iodide salts increases the half-life of a hydrogenase for hydrogen oxidation to up to one week at constant turnover, even with constant exposure to high oxygen concentrations. “Overall, our data confirm the theory that redox films make oxygen-sensitive catalysts completely immune to direct deactivation by oxygen”, concludes Plumeré. “However, it is very important to also suppress hydrogen peroxide production in order to achieve complete protection against oxidative stress.”

“Our work shows that the simple strategy of adding iodide salts to the electrolyte can be sufficient to significantly reduce the inactivation rates of biocatalysts”, the researchers say. They believe that this will enable the widespread implementation of other electrocatalytic processes in real applications. This also includes energy conversion processes such as solar fuel generation by carbon dioxide reduction and the electrosynthesis of fine or basic chemicals such as ammonia.

The work was funded by the German Research Foundation within the framework of the Ruhr Explores Solvation Resolv Cluster of Excellence (EXC-2033 – project number 390677874) and the Shields project (PL 746/2-1) and by the European Research Council within the framework of Starting Grant 715900. Further support was provided by the Max Planck Society, the China Scholarship Council as well as the Ministry of Culture and Science of the State of North Rhine-Westphalia, the Governing Mayor of Berlin – including science and research, and the Federal Ministry of Education and Research as well as the Leibniz Research Cluster (031A360E). Neanderthals walked upright just like the humans of today

What Wild Justice says about the General Licence issue