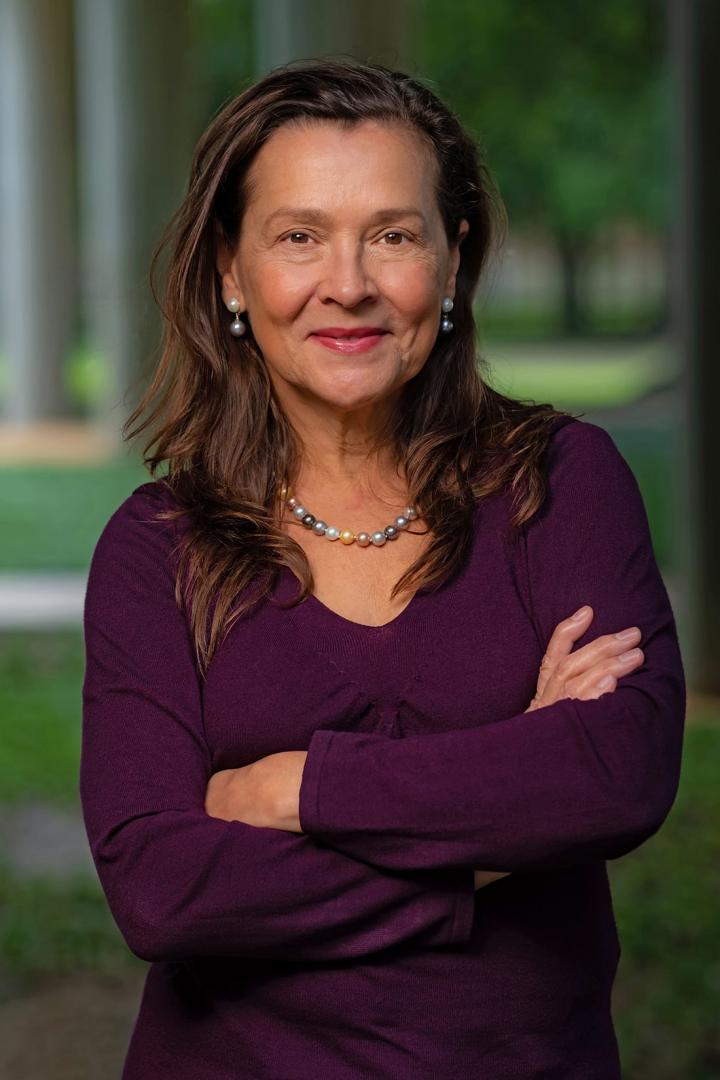 IMAGE: Naomi Halas, director of Rice University’s Laboratory for Nanophotonics, is an engineer and chemist who’s spent more than 25 years pioneering the use of light-activated nanomaterials. view more

HOUSTON — (Jan. 10, 2020) — Rice University engineers have created a light-powered nanoparticle that could shrink the carbon footprint of a major segment of the chemical industry.

The particle, tiny spheres of copper dotted with single atoms of ruthenium, is the key component in a green process for making syngas, or synthesis gas, valuable chemical feedstock that’s used to make fuels, fertilizer and many other products. Researchers from Rice, UCLA and the University of California, Santa Barbara (UCSB), describe the low-energy, low-temperature syngas production process this week in Nature Energy.

“Syngas can be made in many ways, but one of those, methane dry reforming, is increasingly important because the chemical inputs are methane and carbon dioxide, two potent and problematic greenhouse gases,” said Rice chemist and engineer Naomi Halas, a co-corresponding author on the paper.

Syngas is a mix of carbon monoxide and hydrogen gas that can be made from coal, biomass, natural gas and other sources. It’s produced at hundreds of gasification plants worldwide and is used to make fuels and chemicals worth more than $46 billion per year, according to a 2017 analysis by BCC Research.

Catalysts, materials that spur reactions between other chemicals, are critical for gasification. Gasification plants typically use steam and catalysts to break apart hydrocarbons. The hydrogen atoms pair up to form hydrogen gas, and the carbon atoms combine with oxygen in the form of carbon monoxide. In dry reforming, the oxygen atoms come from carbon dioxide rather than steam. But dry reforming hasn’t been attractive to industry because it typically requires even higher temperatures and more energy than steam-based methods, said study first author Linan Zhou, a postdoctoral researcher at Rice’s Laboratory for Nanophotonics (LANP).

Halas, who directs LANP, has worked for years to create light-activated nanoparticles that insert energy into chemical reactions with surgical precision. In 2011, her team showed it could boost the amount of short-lived, high-energy electrons called “hot carriers” that are created when light strikes metal, and in 2016 they unveiled the first of several “antenna reactors” that use hot carriers to drive catalysis.

One of these, a copper and ruthenium antenna reactor for making hydrogen from ammonia, was the subject of a 2018 Science paper by Halas, Zhou and colleagues. Zhou said the syngas catalyst uses a similar design. In each, a copper sphere about 5-10 nanometers in diameter is dotted with ruthenium islands. For the ammonia catalysts, each island contained a few dozen atoms of ruthenium, but Zhou had to shrink these to a single atom for the dry reforming catalyst.

“High efficiency is important for this reaction, but stability is even more important,” Zhou said. “If you tell a person in industry that you have a really efficient catalyst they are going to ask, ‘How long can it last?'”

Zhou said the question is important for producers, because most gasification catalysts are prone to “coking,” a buildup of surface carbon that eventually renders them useless.

“They cannot change the catalyst every day,” Zhou said. “They want something that can last.”

By isolating the active ruthenium sites where carbon is dissociated from hydrogen, Zhou reduced the chances of carbon atoms reacting with one another to form coke and increased the likelihood of them reacting with oxygen to form carbon monoxide.

“But single-atom islands are not enough,” he said. “For stability, you need both single atoms and hot electrons.”

Zhou said the team’s experimental and theoretical investigations point to hot carriers driving hydrogen away from the reactor surface.

“When hydrogen leaves the surface quickly, it’s more likely to form molecular hydrogen,” he said. “It also decreases the possibility of a reaction between hydrogen and oxygen, and leaves the oxygen to react with carbon. That’s how you can control with the hot electron to make sure it doesn’t form coke.”

Halas said the research could pave the way “for sustainable, light-driven, low-temperature, methane-reforming reactions for production of hydrogen on demand.”

“Beyond syngas, the single-atom, antenna-reactor design could be useful in designing energy-efficient catalysts for other applications,” she said.

The technology has been licensed by Syzygy Plasmonics, a Houston-based startup whose co-founders include Halas and study co-author Peter Nordlander.

The research was supported by the Welch Foundation, the Air Force Office of Scientific Research (FA9550-15-1-0022) and the Department of Defense.

https://news-network.rice.edu/news/files/2020/01/0108_SYNGAS-nh30-lg.jpg CAPTION: Naomi Halas, director of Rice University’s Laboratory for Nanophotonics, is an engineer and chemist who’s spent more than 25 years pioneering the use of light-activated nanomaterials. (Photo by Jeff Fitlow/Rice University)

This release can be found online at news.rice.edu.

Located on a 300-acre forested campus in Houston, Rice University is consistently ranked among the nation’s top 20 universities by U.S. News & World Report. Rice has highly respected schools of Architecture, Business, Continuing Studies, Engineering, Humanities, Music, Natural Sciences and Social Sciences and is home to the Baker Institute for Public Policy. With 3,962 undergraduates and 3,027 graduate students, Rice’s undergraduate student-to-faculty ratio is just under 6-to-1. Its residential college system builds close-knit communities and lifelong friendships, just one reason why Rice is ranked No. 1 for lots of race/class interaction and No. 4 for quality of life by the Princeton Review. Rice is also rated as a best value among private universities by Kiplinger’s Personal Finance.