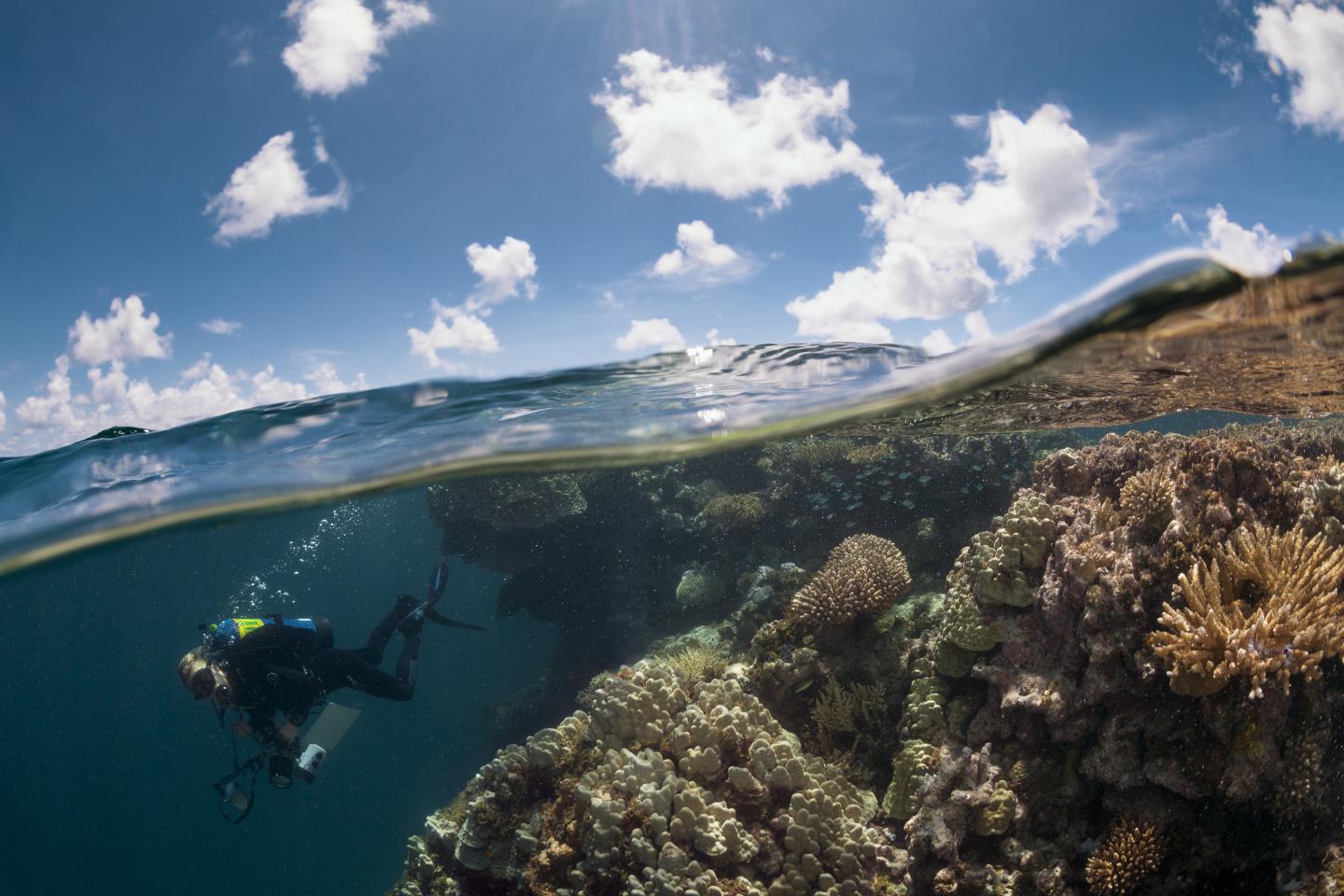 IMAGE: A scientific diver on the Global Reef Expedition sets out to survey the coral reefs of French Polynesia. view more

The study involved an international team of 73 scientists from the Khaled bin Sultan Living Oceans Foundation, the University of Miami, and other research organizations around the world, who worked side by side with local experts to gain a thorough census of reef health throughout French Polynesia. Over the course of seven months, they conducted standardized surveys of coral and fish communities and created high-resolution habitat maps of the seafloor using ground truthed satellite imagery.

“The archipelagos of French Polynesia are home to some of the healthiest and most expansive coral reefs on the planet,” said Sam Purkis, Ph.D. lead author of the study. “Recent models suggest that French Polynesia might serve as a climate refuge for the survival of reefs in the future. All these factors amplify the value of French Polynesia’s incredible reefs and motivated our expedition to this wonderful location.”

This unprecedented scientific mission mapped and surveyed reefs around 29 islands in the Society, Tuamotu, Gambier, and Austral Archipelagoes. The Expedition covered over 8,000 km and conducted nearly 4,000 SCUBA surveys of French Polynesia’s coral reefs and associated fish communities at 264 dive sites throughout the country. “The field work we did in French Polynesia was a massive undertaking. There have been no other comprehensive coral reef surveys in French Polynesia that covered the vast area we studied. In fact, many of the remote reefs we visited had never been studied by scientists before,” said Alexandra Dempsey, an author of the study who helped coordinate the research mission.

What the scientists found gives us hope for the future of French Polynesia’s coral reefs. The health of reefs in French Polynesia were generally very good but varied greatly by location. Gambier’s reefs were home to extraordinary coral and fish communities and had some of the highest live coral cover observed on the entire Global Reef Expedition. In Gambier, for instance, coral cover exceeded 70%. For the South Pacific, these numbers were unprecedented. However, cyclones and severe crown-of-thorns starfish outbreaks decimated reefs in the Society and Austral Archipelagoes, locally reducing live coral cover to only 5%. The reefs around Tuamotu supported vibrant fish communities and the highest density of fish and sharks seen in French Polynesia. Generally speaking, the scientists found the healthiest reefs and fish communities were most likely to be found around islands with low elevation and few residents.

“Our research shows that there may be pockets of resilience in French Polynesia’s reefs,” says Renee Carlton, one of the authors of the study. “I am hopeful that in the face of continued natural and anthropogenic pressures, the coral reefs of French Polynesia will continue to flourish.”

In addition to assessments of fish and coral communities covered in the report, high-resolution habitat and bathymetric maps were created through the analysis of satellite data for all the reefs studied, which are available at https://maps.lof.org/lof. Purkis, Chief Scientist at the Khaled bin Sultan Living Oceans Foundation and Professor and Chair of the Department of Marine Geosciences at the University of Miami Rosenstiel School of Marine and Atmospheric Science, pioneered the technique of using a satellite imagery combined with underwater surveys to accurately map large areas of shallow water marine habitat, which he did throughout the Global Reef Expedition. Although many changes have occurred to the reefs since the Expedition, this report should provide natural resource managers in French Polynesia with a valuable baseline on the status of French Polynesia’s coral reefs. The Khaled bin Sultan Living Oceans Foundation hopes these findings will help protect and preserve French Polynesia’s coral reef ecosystems for generations to come.

“Global Reef Expedition: French Polynesia Final Report” was published online on December 11, 2019. The study’s authors include Sam Purkis, Ph.D. of the University of Miami Rosenstiel School of Marine and Atmospheric Science and the Khaled bin Sultan Living Oceans Foundation; Alexandra Dempsey, Renée Carlton, and Elizabeth Rauer Thompson of the Khaled bin Sultan Living Oceans Foundation; Serge Andréfouet of the Institut de recherche pour le développement (IRD); and Badi Samaniego of the University of the Philippines. Copies of the report are available for download in French and English at lof.org.

About the University of Miami’s Rosenstiel School

The University of Miami is one of the largest private research institutions in the southeastern United States. The University’s mission is to provide quality education, attract and retain outstanding students, support the faculty and their research, and build an endowment for University initiatives. Founded in the 1940’s, the Rosenstiel School of Marine & Atmospheric Science has grown into one of the world’s premier marine and atmospheric research institutions. Offering dynamic interdisciplinary academics, the Rosenstiel School is dedicated to helping communities to better understand the planet, participating in the establishment of environmental policies, and aiding in the improvement of society and quality of life. For more information, visit: http://www.rsmas.miami.edu and Twitter @UMiamiRSMAS

The Khaled bin Sultan Living Oceans Foundation is a US-based nonprofit environmental organization that protects and restores the world’s oceans through scientific research, outreach, and education. As part of its commitment to Science Without Borders®, the Living Oceans Foundation provides data and information to organizations, governments, scientists, and local communities so that they can use knowledge to work toward sustainable ocean protection. http://www.livingoceansfoundation.org 13 fun and sustainable activities to enjoy before summer ends