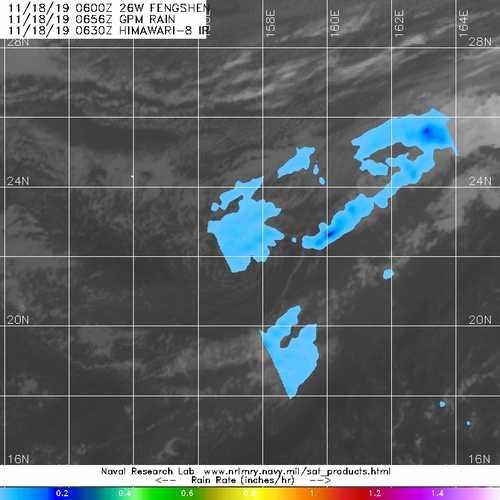 IMAGE: The GPM core satellite passed over Tropical Depression Fengshen in the Northwestern Pacific Ocean on Nov. 18 at 1:56 a.m. EST (0656 UTC) and found a few areas of light… view more

A NASA analysis of rainfall rates shows that the once mighty Fengshen is now a depression devoid of heavy rainfall.

NASA has the unique capability of peering under the clouds in storms and measuring the rate in which rain is falling. Global Precipitation Measurement mission or GPM core passed over Fengshen from its orbit in space and measured rainfall rates throughout the storm on Nov. 18 at 1:56 a.m. EST (0656 UTC). GPM found a few areas of light rain (blue) falling at a rate of 0.4 inches (10 mm) per hour remained in the weakening system.

Fengshen is expected to become a remnant low pressure system later on Nov. 18.

Typhoons and hurricanes are the most powerful weather event on Earth. NASA’s expertise in space and scientific exploration contributes to essential services provided to the American people by other federal agencies, such as hurricane weather forecasting. Do most Americans believe in human-caused climate change?

Edible AI? The future of food is up to tech