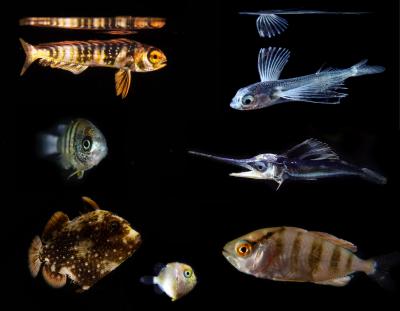 A new research study has revealed that larval fish species from various ocean habitats are now being threatened by plastic pollution that infects their nursery habitats—at levels on average, eight times higher than those recently found in the Great Pacific Garbage Patch.

The study is also the first to show that larval coral reef fish and pelagic species consume plastic, as early as just a few days after they’re born. While scientists had known that adult fish consume plastic, until now, it was not known if larval fish also do so, nor the health implications.

The study was published in the journal Proceedings of the National Academy of Sciences.

Researchers at Arizona State University’s Center for Global Discovery and Conservation Science (GDCS) worked alongside an international team of scientists from NOAA’s Pacific Islands Fisheries Science Center to conduct one of the most ambitious research studies to date.

To perform their work, the research team used a combination of advanced remote sensing techniques, field-based plankton tow surveys and fish dissection to observe the impact of plastics on the larval fish. They conducted the research along a pristine area along the west coast of Hawai’i Island, the southeasternmost island in the Hawaiian Archipelago.

They explored a prominent feature of these coastal waters called surface slicks, which are naturally occurring, ribbon-like, smooth water features at the ocean surface.

The locations of the surface slicks were identified by an advanced remote sensing technique pioneered by researchers at GDCS. This technique involved using more than 100 shoebox-sized satellites, built and operated by partner Planet to discern textural sea surface differences between surface slicks and regular seawater. “Surface slicks had never been mapped before, but we knew it would be vital to scaling up the field-based study. Our new method developed for this study can be applied anywhere in the world,” noted co-author Dr. Greg Asner, director of GDCS.

Surface slicks act as nursery habitats for larval fish because they contain a rich and steady diet of planktonic organisms. “Slick nurseries also concentrate lots of planktonic prey, and thereby provide an oasis of food that is critical for larval fish development and survival,” said Jonathan Whitney, a marine ecologist for the Joint Institute for Marine and Atmospheric Research and NOAA, and co-leader of the study.

NOAA researchers used tow surveys to collect planktonic organisms, larval fish and plastic pieces by using a straight-conical ring net towed behind a small boat. After the organisms and plastics were identified, the researchers then dissected the larval fish to analyze what they ingested.

“We found tiny plastic pieces in the stomachs of commercially targeted pelagic species, including swordfish and mahi-mahi, as well as in coral reef species like triggerfish,” said Whitney. Plastics were also found in the stomachs of flying fish, a vital food source for apex predators like tunas and Hawaiian seabirds.

The team also found that larval fish found in surface slicks were larger, more well-developed, and better swimmers compared to other fish. Larval fish that actively swim can better orient with their environment, and this suggests that tropical larval fish could be actively seeking surface slicks for their concentrated prey resources.

Another important finding was that the same ocean processes that accumulate prey in surface slicks also concentrate buoyant plastics that threaten aquatic ecosystems.

The researchers found that surface slicks comprise less than 10% of ocean surface habitat but are estimated to contain 42.3% of all surface-dwelling larval fish and 91.8% of all floating plastics.

In fact, the surface slicks contained seven times more plastics than larval fish with densities, on average, eight times higher than those recently found in the Great Pacific Garbage Patch. In comparison to neighboring surface water just a couple hundred yards away, plastics were 126 times more concentrated in the surface slicks.

“The surface slicks we mapped have turned out to be like fish superhighways that connect different bays and reefs along the west coast of Hawaii Island,” commented Asner. “This is how reef fish get around over long distances, and that has enormous implications for reef management since a change in fisheries activity in one bay can have an impact on more distant bays down the superhighway. Unfortunately, now we can also say these surface slicks are plastic superhighways.”

Researchers are still uncertain as to whether plastic ingestion is harmful to larval fish. In adult fish, plastics can cause gut blockage, malnutrition, and toxicant accumulation. Likewise, larval fish are highly sensitive to changes in their environment and food, so prey-size plastics could impact their development and reduce their chances of survival.

“Larval fish are foundational for ecosystem function and represent the future cohorts of adult fish populations,” noted Jamison Gove, an adjunct faculty at GDCS, research oceanographer for NOAA, and co-lead of the study. “The fact that larval fish are surrounded by and ingesting non-nutritious toxin-laden plastics, at their most vulnerable life-history stage, is cause for alarm.”

19 fruits and vegetables to help keep you hydrated The Interior Secretary Wants to Enlarge a Dam. An Old Lobbying Client Would Benefit.