Callum Roberts: ‘Sharks do bite people, they do kill people, but it’s more error than intention’

Callum Roberts is professor of marine conservation at York University and was chief scientific adviser on Blue Planet 2. His new book, Reef Life, details a life spent in the oceans studying the marine ecosystem.

How was your first dive?
It was in the north of Scotland, where I grew up. I dived out of Scrabster harbour near Thurso and I had no idea then just how bruised and trashed and scraped the whole sea had become, and how much life had been removed from it over the centuries. I was in a wetsuit that I’d glued together at home. A wetsuit should hug every curve, but this one didn’t. It was bloody cold.

Did you always want to study coral reefs?
From early childhood I wanted to be an explorer and I held on to that desire for a long time. I realised, though, that at some point I had to earn a living. There were patches of the world that were still relatively unexplored, particularly the underwater environment. So I trained in biology and that enabled me to fulfil my childhood dream.

You write that heaven is a dive on a coral reef. Why is that?
The sheer exuberance of colour and form on a coral reef is unparalleled. It’s like an impressionist canvas where all the brush strokes have come to life. The corals themselves form a 3D architectural complexity with palaces and gardens. There’s the play of light on the seabed, the way the waves dapple the light across the animals. It’s invigorating in a way that’s hard to describe. 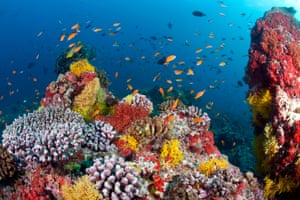 A coral reef at Ari Atoll in the Maldives. Photograph: Franco Banfi/Getty Images

Any hairy moments?
My most dangerous dives have been when I’ve let my guard down and followed the wildlife into the danger zone. You can get into trouble much more easily on a coral reef than on a mountainside. From 40 metres to 60 metres you get nitrogen narcosis and from 80 metres and deeper you get oxygen poisoning. That’s what really kills people. On one dive, I foolhardily went down to 60 metres. I had lost the fear of it. I didn’t sense the danger. There can be very strong downcurrents that can suck you down 15 or 20 metres before you are able to inflate your jacket and counteract the pull.

What about sharks?
I grew up on a diet of Cousteau and others who milked sharks for all the terror they could. They wanted to show how daring they were. It coloured my view early on, but over the years I realised the sharks are not bothered by me. Sharks do bite people, they do kill people, but not very many, and it seems to be more error than intention. A student of mine was recently diving in the Maldives where here is an incredible abundance of tiger sharks there. She saw 23 on the same dive. The tiger sharks came up to them, and some of the divers were bumped, but other than that the sharks ignored them. I’m not bothered about sharks at all any more, there’s only excitement and the feeling of privilege at being with these creatures.

How does climate change harm corals?
What’s killing corals at the moment is mass bleaching. Corals have a 100m-year-old relationship with a microscopic alga that lives in their tissues. These seaweeds produce most of the coral’s food: it’s what makes them the reef builders they are. But when the water warms up, the relationship goes bad and the corals have to expel the seaweeds or they will die. The problem is that a bleached coral is a starving coral, so if the temperature stays high for a while, the coral starves to death.

Is bleaching the only impact of climate change?
Acidification is also happening. Eventually, ocean acidity will reach levels that etch away exposed coral skeletons. They won’t be able to build strong skeletons, or won’t be able to calcify at all. How far and fast this will happen is one of the big unknowns. By 2100, it could cause massive disruption, not only to coral reefs, but to all sorts of creatures that make calcium carbonate shells: molluscs, crustaceans, plankton-like coccolithophores and foraminifera. These are prolific, widespread, economically important and ecologically crucial.

What damage have you witnessed?
In the Maldives, the mass coral bleaching and death in 2015/16 was brutal. With El Niňo, you see a wave of bleaching temperatures moving from east to west. You can see it coming and there is nothing you can do about it. It’s like a slow‑motion hurricane and you think oh my God, disaster is going to strike. When it hit the Maldives in 2016, it took out about two-thirds of the coral. On one beautiful reef where I dive, 99% of the coral died. That was so shocking, that it could be turned from this extraordinary vitality to something that looked like a concrete replica of a reef in a bad public aquarium in the space of a couple of months. We are now watching the reefs recover, but the problem for coral reefs is that the spaces between impacts are getting shorter and the extent and severity seems to be getting bigger.

You say the Gulf states are locked in a “gigantic pissing contest” over coastal development…
It’s horrible in the Gulf and has been for a long time. I fear there is no way of stopping it; there is too much money sloshing around. Every new development seems to want to thrust out further into the sea, but the nearest bit of shallow water habitat is the richest and it gets covered over. Along the Red Sea coast they have carved up the reef into marinas and filled it over to create new land. It’s a shocking and needless destruction of an immensely important asset, and nobody cares.

The Great Barrier Reef is in bad shape too. What happened?
The Australian government has walked away from its responsibility in tackling climate change. They are in thrall to the miners, particularly the coal miners. The government is in the pocket of industry, but so is the population. Many Australians have benefited from the mining industry. They’ve bought second homes on the coast and expensive boats, they can afford to take holidays overseas. It’s hard to rein that in. As people said in the election this year, climate change was on the ballot paper and climate change lost. 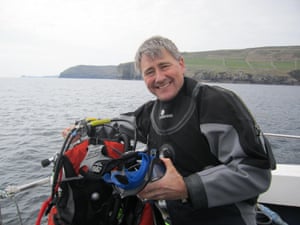 Some scientists experience “ecological grief” in their work. Have you?
You feel it in your guts. It’s a visceral blow to your sense of where the world is going. You hope for the best, but when you see the worst happening it’s not easy. I’m a hardened optimist, but even cast-iron optimists cannot be optimistic about the future of corals. What keeps the despair at bay is seeing students going out into great positions, actively contributing to protecting the world and making it a better place.

Have Greta Thunberg and Extinction Rebellion made a difference?
She is motivating a huge number of people across the world to come together and tell their leaders that they need to act. We are seeing a willingness to take action on things like greenhouse gases that wasn’t there before and an urgency about it that is being thrust upon reluctant leaders. You can protest all you like without inconveniencing people and nothing happens, but when you start inconveniencing people the politicians wake up.

What can we do for the reefs?
There is no real possibility across much of the world of being able to maintain, restore, or recover the reefs to the condition they were in at the start of my career. But it is always worthwhile to protect them. A reef that has no living coral can still sustain a huge variety of other life. Climate change is the big unmanaged stress at the moment. To give reefs the best chance of survival, we need to alleviate all the stresses we can. We need to protect them from fishing, dredging and pollution, in particular nutrient and sediment pollution. And we need to prepare for the worst. That means thinking about global refuges where coral reefs may be able to re-establish themselves if the worst of the predictions come true. Ultimately, the only thing that will save coral reefs is greenhouse gas reductions.

The evolutionary puzzle of the mammalian ear The right dose of geoengineering could reduce climate change risks