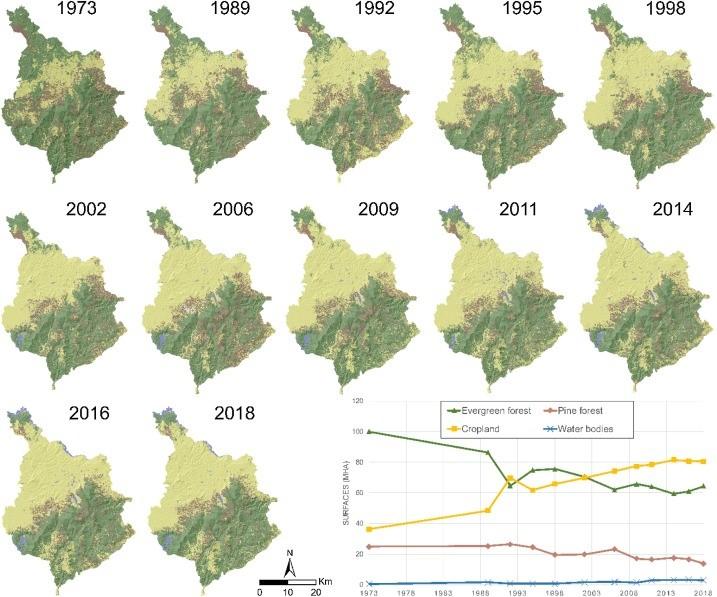 Tropical forests are under increasing pressure from human activity such as agriculture. However, in order to put effective conservation measures in place, local decision-makers must be able to precisely identify which areas of forest are most vulnerable.

A new analysis method spearheaded by researchers from the French Agricultural Research Centre for International Development (CIRAD), the International Center for Tropical Agriculture (CIAT) and the University of Rennes-2 could hold the key.

The method focuses on the concept of forest vulnerability, meaning a forest’s exposure to threats and its capacity to recover from them. Previously this concept of vulnerability, as defined by the Intergovernmental Panel on Climate Change (IPCC), was only used in relation to the effects of climate change on forests.

The method was tested for the first time in the Di Linh district of Vietnam’s Central Highlands, where the cultivation of cash crops such as coffee has transformed forestlands into areas vulnerable to drought, soil erosion and the outbreak of fires.

Half a century of data

The researchers combined mosaic mapping of current land use with 45 years of Sentinel-2 and Landsat satellite images. Together this data provided a detailed picture of how the territory had changed over time and enabled the precise identification of the most vulnerable areas.

“We show that the most vulnerable areas are composed of degraded forests, a high fragmentation of forest habitat that increases the sensitivity of a forest to fires, and the presence of coffee growing by extension,” said Clément Bourgoin, a CIAT scientist and Ph.D. student at CIRAD who helped develop the method. “These maps make it possible to target areas where we must limit crop expansion and increase the response capacity of forests by limiting fragmentation.”

The results of the study, published in the International Journal of Applied Earth Observation and Geoinformation, shows how the development of infrastructure, coffee, rice and other crops in the region has been at the expense of evergreen forest. It reveals that since 1973 evergreen forest cover in the region was reduced from 100?to 60 million hectares as a direct consequence of agricultural expansion. Deforestation peaked in 1992 and has slowed in recent years although new areas are still being converted and evidence of degradation and fragmentation can still be seen.

The method was tested in the region as part of a REDD+ (Reducing Emissions from Deforestation and forest Degradation) pilot project that aims to help decisions makers such as land use planners and local forest rangers in the monitoring of forests. The researchers hope the mapping will lead to more regular monitoring of forest vulnerability through systems such as Terra-i, which can detect deforestation in near real-time.

The team has applied a similar method to a former deforestation front in Paragominas in the Brazilian state of Para, and expect to publish a study with their findings next year.

This work was implemented as part of the CGIAR Research Program on Forest Trees and Agroforestry (FTA) and on Climate Change, Agriculture and Food Security (CCAFS), the latter with support from CGIAR Fund Donors and through bilateral funding agreements. For details, please visit https://ccafs.cgiar.org/donors.