Has global warming stopped? The tap of incoming energy cannot be turned off 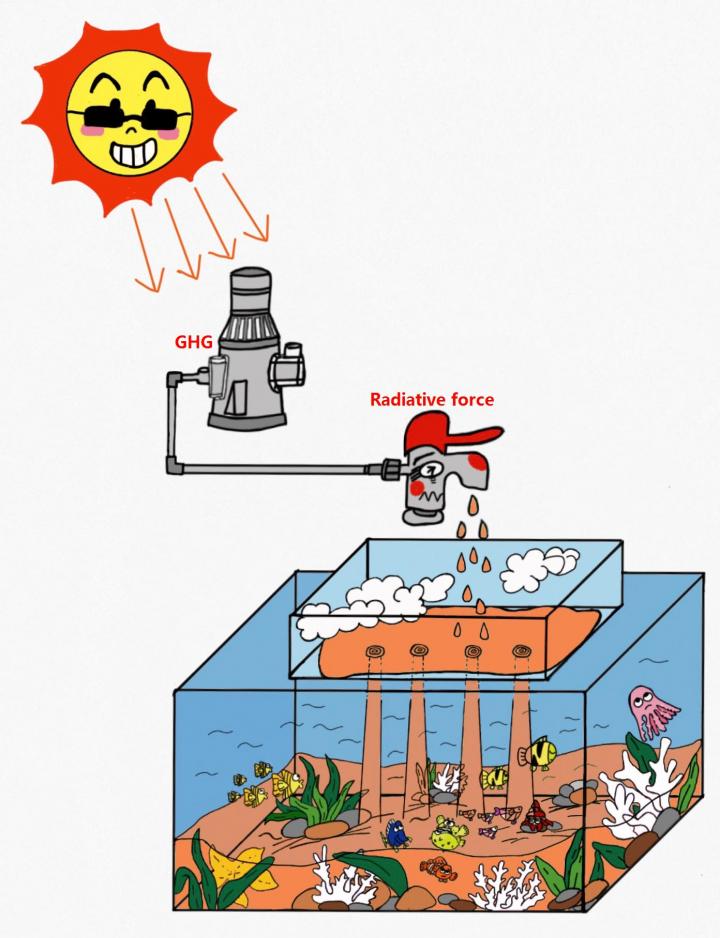 IMAGE: The greenhouse (GHG) effect caused by CO2 and other GHG gases acts as a “pump “, feeding more and more energy into the Earth system. Most of this energy is ultimately… view more

As a result of industrialization, the carbon dioxide in the Earth’s atmosphere has increased continuously over the past 100 years, which is considered as the main reason behind global warming. However, the observational global mean atmospheric temperature leveled off over the first decade of the 21st century, in contrast to the rapid warming during the late 20th century. This phenomenon, known as the “atmospheric warming slowdown” or “global warming hiatus”, has attracted great attention worldwide owing to its ostensible contradiction of the human-induced global warming theory.

The changes in ocean heat content might have a tight relationship with the atmospheric warming slowdown. Dr Changyu Li, Prof. Jianping Huang and their colleagues, a group of researchers from the Key Laboratory for Semi-Arid Climate Change of the Ministry of Education, College of Atmospheric Sciences, Lanzhou University, have had their findings published in Advances of Atmospheric Sciences.

In their paper, they explore the energy redistribution between the atmosphere and ocean at different latitudes and depths by using observational data as well as simulations of a coupled atmosphere-ocean box model.

“Imagine the energy transport in our climate system as a water flow”, Dr. Li says. “Let’s turn on a tap at the top of the system, the feed rate of which represents the top-of-the-atmosphere radiative imbalance caused by the greenhouse effect. A bucket below the tap can be an analogue of our atmosphere, and its water level is analogous to atmospheric warming. There is also a sinking flow at its bottom, draining into a larger bucket (i.e. the ocean). Now, here comes the key point. Generally, the water level of the atmospheric bucket rises as a result of global warming. However, if the drain rate approximately equals the feed rate of the tap, the water level of the bucket will not increase (the occurrence of the warming slowdown). That’s the basic idea of our coupled box model.”

“A rapid increase in the global ocean heat content has been detected in observations during the warming slowdown period, at a rate of about 9.8 × 1021 J yr-1. That is, from the energy point of view, there is no slowdown in global warming if we take the ocean into consideration”, he adds. “Furthermore, the increase of heat content provides a worrisome picture of the ocean. This rapid oceanic warming could lead to serious degradation of marine ecosystems, eventually becomes a great threat to the ocean biodiversity.” We have to move beyond “greening the status quo” Why donât evergreen trees change color and drop their leaves? A Methane Leak, Seen From Space, Proves to Be Far Larger Than Thought