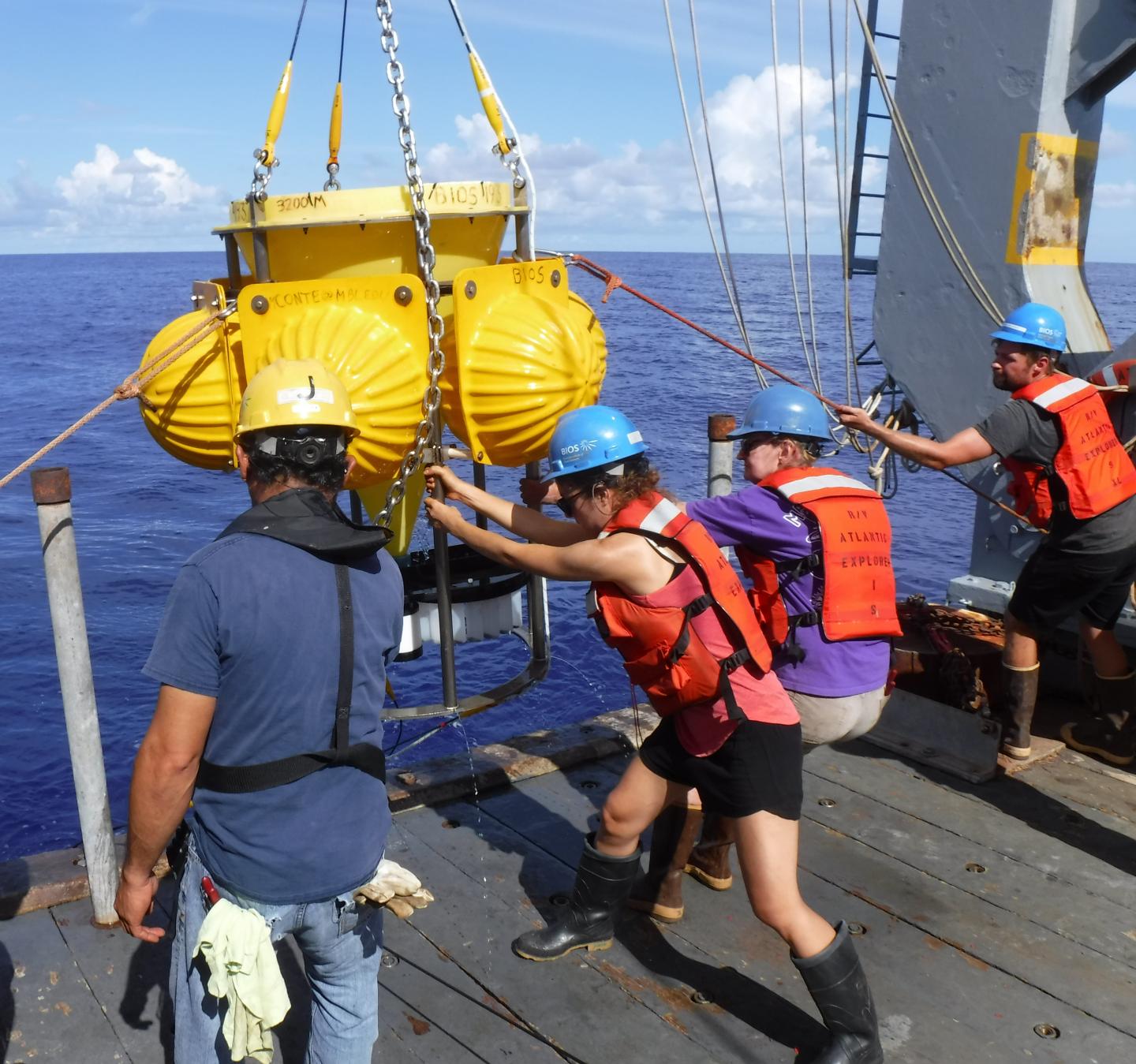 IMAGE: At center, scientists Rut Pedrosa Pàmies (of MBL) and Maureen Conte (of MBL and BIOS) and crew of the R/V Atlantic Explorer recover a deep ocean sediment trap on the… view more

WOODS HOLE, Mass. — In early October 2016, a tropical storm named Nicole formed in the middle of the Atlantic Ocean. It roamed for six days, reaching Category 4 hurricane status with powerful 140 mile-per hour-winds, before hitting the tiny island of Bermuda as a Category 3.

Hurricanes like Nicole can cause significant damage to human structures on land, and often permanently alter terrestrial landscapes. But these powerful storms also affect the ocean.

Scientists have a good understanding of how hurricanes impact the surface layer of the ocean, the sunlit zone, where photosynthesis can occur. Hurricanes’ strong winds churn colder water up from below, bringing nutrients such as nitrogen and phosphorus to the surface and stimulating short-lived algae blooms. However, until recently, we didn’t know much about how hurricanes impact the deep ocean.

A new study of Hurricane Nicole by researchers at the Marine Biological Laboratory (MBL), Woods Hole, and the Bermuda Institute of Ocean Sciences (BIOS) has provided novel insight on those impacts. Nicole had a significant effect on the ocean’s carbon cycle and deep sea ecosystems, the team reports.

The Oceanic Flux Program (OFP) has been continuously measuring sinking particles, known as marine snow, in the deep Sargasso Sea since 1978. It’s the longest-running time series of its kind.

Before hitting Bermuda, Hurricane Nicole passed right through the OFP site, about 50 miles southeast of Bermuda. This gave the scientists a unique opportunity to study how hurricanes impact the deep ocean.

To study the deep ocean, the OFP strings scientific equipment, including sediment traps, at various depths on a mooring line that extends up from a 2,000-pound anchor situated on the seafloor (2.8 miles below the surface).

In the new study, published in Geophysical Research Letters, MBL and BIOS scientists provide the first direct evidence that hurricanes affect the ocean’s biological pump, a process in which living organisms transfer carbon from the surface to the deeper ocean layers and the seafloor.

High-velocity winds associated with Hurricane Nicole generated intense surface-ocean cooling and strong currents and underwater waves, some of which lasted more than two weeks. This significantly accelerated the biological pump, with the currents pushing nutrients into the surface layer, triggering an algae bloom.

The supercharged biological pump then rapidly funneled the organic material from the hurricane-induced algae bloom down into the deep ocean. This provided a big boost of food for marine life in the deep ocean where light doesn’t reach.

The scientists found substantial increases in fresh organic materials in sediment traps at 4,900 feet and 10,500 feet below the surface. Algae growth measurements at the OFP site after Hurricane Nicole’s passage were among the highest observed in October over the last 25 years.

“The surface and the deep ocean are really well connected in the aftermath of these powerful storms,” explained Rut Pedrosa Pàmies, a biogeochemist and oceanographer at MBL’s Ecosystems Center and first author of the study. “The material that is reaching those depths is crucial for the deep-ocean ecosystem.”

Since 1980, seven Category 3 or greater hurricanes have passed within 186 miles of Bermuda. These hurricanes affected a total of more than 32,800 square miles of surface water, an area greater than the state of Maine.

Current climate models indicate that hurricane intensity could increase as human-induced global warming continues. This could expand the area of ocean disturbed by hurricanes, with implications for the ocean’s biogeochemical cycles and deep-ocean ecosystems.

Due to the extreme conditions of the deep ocean, this remarkable biome has been notoriously difficult for scientists to study. Additionally, due to difficulties of shipboard data collection in extreme weather conditions, the direct impacts of hurricanes are not well understood. Sediment traps like those used by the OFP are crucial to understanding their influence on the deep ocean.

When the OFP began in 1978, scientists were only able to collect a single cup of sinking particles every two months. “Now, we have biweekly sample resolution and sediment traps at three depths,” Pedrosa Pàmies said.

With the proliferation of new equipment and technologies to study the deep ocean, understanding this last frontier is finally within reach.

The Marine Biological Laboratory (MBL) is dedicated to scientific discovery – exploring fundamental biology, understanding marine biodiversity and the environment, and informing the human condition through research and education. Founded in Woods Hole, Massachusetts in 1888, the MBL is a private, nonprofit institution and an affiliate of the University of Chicago.

CARBON: Emissions were flat in 2019 — but don’t cheer, analysts say The Greatest Fights In The Animal Kingdom | Top 5 | BBC Earth