Not long ago, high drama at London fashion week meant a battle over hemlines or between designer egos. But as the climate crisis challenges fashion’s fundamental viability as an industry, the stakes, and tempers, have been raised.

Hours before the first catwalk show of the five-day run, the climate campaign group Extinction Rebellion staged a “die-in” outside the central London venue, throwing buckets of fake blood to symbolise how “business as usual” for fashion and other industries is leading toward the extinction of life on earth. The group is calling for the industry to be “cancelled” and is planning continued disruption to fashion week, culminating in a “funeral procession for fashion” to be staged on Tuesday evening.

Sustainability is now widely accepted in the industry to be the metric that matters most – at least in theory. In practical terms there is a good deal of resistance to the suggestion that clothes production should be phased out completely, but a new generation of designers is approaching fashion with sustainability as a first principle.

As a teenager in Liverpool, Patrick McDowell made clothes out of unwanted end-of-line fabrics. “I’ve always done this, so when I heard about sustainability I thought: ‘Oh, there’s a name for what I’m doing.’” His new collection, Fire Fighting Aunties, inspired by his firefighter father and his mother and aunts who “put out the family fires and rescued us from trouble”, is created from surplus fabric donated by Burberry and crystals by Swarovski and is on display inside the headquarters of London fashion week. The use of quality raw materials means “it doesn’t look like waste, and that’s important”.

“Our generation have been very self-centred,” says the designer Roland Mouret, a 20-year veteran of fashion week, at the catwalk headquarters. “We are the generation who changed fashion from a model of two collections a year to six collections a year. So now we have to take some responsibility.”

Mouret has partnered with Arch & Hook to create clothes hangers made from 100% recycled marine plastic. After use they are 80% recyclable, rather than the standard 25%. “The volume of clothes hangers that went to landfill last year in the USA could build a structure the size of the Empire State Building,” says Mouret. “I’m prouder of this project than anything else I’ve done.”

Meanwhile, the online retailer MyWardrobe is reinventing itself as a rental service for the designer clothes it once sold, and Harvey Nichols is introducing an after-care service for shoes and bags to encourage customers to restore rather than replace last year’s purchases.

But, says the Extinction Rebellion activist Sara Arnold, “what is happening in fashion so far is not in proportion to the crisis that we are in”.

She points out that clothes production is still growing and on course for a 63% increase between now and 2030. “We have actually had warm and productive conversations with the British Fashion Council. But at the moment the industry thinks sustainability can help fashion survive. This is not about the survival of fashion, it’s about the survival of the planet.”

Extinction Rebellion, which brought severe disruption to central London streets in April, plans two days of “swarming” (described by Arnold as “blocking the road enough to slow the traffic down but keeping it moving enough so that people don’t get angry”) over the weekend.

“London fashion week has multiple venues so we can cause disruption to personnel trying to travel between them, and call attention to the fact that none of us can continue with business as usual.”

The shows will be chosen for logistical reasons rather than to target specific designers or brands. “It’s not about blaming or shaming,” says Arnold. “We understand that the fashion industry did not create the toxic system we are all in. But it is part of it, and it needs to change.”

A funeral procession will depart from Trafalgar Square at 5pm on Tuesday 17 September to mark the last day of shows.

Arnold studied fashion design at Central St Martins before environmental concerns led to a decision not to design or produce new clothes. She has now founded the clothes rental company Higher Rental. “During world war two, clothing was rationed and ostentatious dress became frowned upon. I’m not saying that’s what should happen now, but that drastic level of action is relevant given that this situation is more profound than the second world war.”

One of the reasons fashion is a target for the climate activists is because it shapes people’s aspirations, says Arnold.

“Culture should be leading the way in facing this issue, but instead culture is being used to deceive us that everything is fine. Culture is complicit in our destruction, when it should be taking responsibility for people getting their heads around this existential problem.

“The fashion industry has a huge voice and it should be using it. When a fire alarm goes off, someone needs to stand up and leave the room, otherwise no one thinks the alarm is real. We need fashion to be that person.”

Caroline Rush, the chief executive of the British Fashion Council, says she does not agree with Arnold that the industry’s sustainability efforts amount to mere tweaking. “I think it’s more than tweaking. In London we are seeing businesses come through which are truly focused on having a much lower impact on the planet, whether that’s by upcycling fabric or through circular business models. We hear the message of Extinction Rebellion. Our role is to make the information digestible for fashion businesses so that they can take practical action.” 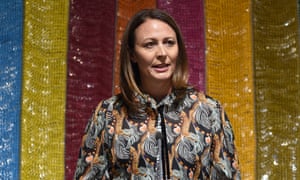 In an echo of New York fashion week last week, where the choice of Brooklyn over Manhattan for many major shows was seen as symptomatic of fashion wanting to seem less elitist and more in touch with ordinary people, London fashion week has this season increased the number of events open to the public.

Alexa Chung, House of Holland and Self-Portrait are all staging catwalk shows to which tickets are on open sale, albeit with a £135 price tag. Anya Hindmarch, who has long been at the vanguard of the shift towards more inclusive, experiential events – in recent seasons she has floated giant heart balloons over the capital’s landmarks and filled Banqueting House with a giant beanbag – is celebrating her new collection with a maze inspired by traditional red postboxes installed for the next four days in a Soho car park, with tickets on sale for £12.50. Underestimate Ocasio-Cortez At Your Own Peril