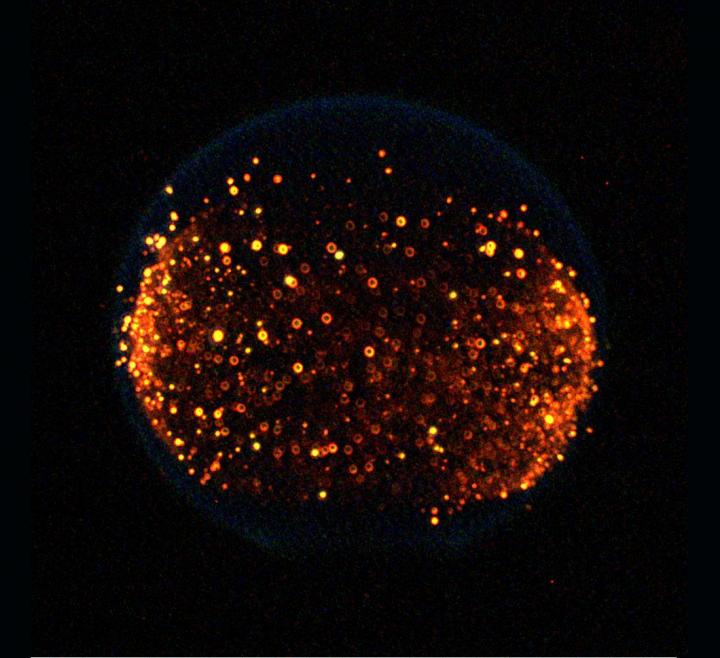 IMAGE: This flame was one of many ignited as part of the Flame Design investigation inside of CIR to investigate the amount of soot that is produced in different conditions. The… view more

Understanding how fire spreads and behaves in space is crucial for the safety of future astronauts and for understanding and controlling fire here on Earth.

Microgravity is also crucial for combustion researchers to test some of the core principles of the field. “If you look at any textbook on combustion, almost all of the theories that are developed ignore the influence of gravity,” says NASA’s Glenn Research Center scientist Daniel Dietrich.

The primary focus of microgravity combustion experiments has been related to either fire safety in space or better understanding of practical combustion on Earth and in space. The reduced gravity creates flames that look a lot different from the ones seen here on Earth: with the near absence of gravity on the space station, flames tend to be spherical. On Earth, hot gasses from the flame rise while gravity pulls cooler, denser air to the bottom of the flame. This creates both the shape of the flame, as well as a flickering effect. In microgravity, this flow doesn’t occur. This reduces the variables in combustion experiments, making them simpler and creating spherical shaped flames.

Learning to make cleaner or more efficient flames can have an impact on many areas of our lives. “Most of our electricity in the U.S. is generated by combustion,” says Glenn project scientist Dennis Stocker. “In regards to power transportation, where would we be without combustion? So combustion is a big part of our modern lives.”

As with other space station research, experiments with combustion are developed to be safely conducted without risk to the spacecraft or its crew. That is why the Combustion Integrated Rack (CIR) was created and launched to the International Space Station in 2008. The CIR, along with facilities such as the Microgravity Science Glovebox, created a secure and safe environment in which to study combustion without putting the crew in danger. The CIR provides general-purpose hardware to support a wide range of combustion experiments. Researchers also have provided additional hardware needed to conduct a variety of flame experiments.

“One of the biggest discoveries, not only in the microgravity program, but in probably the past 20 – 30 years of combustion research has been during the FLEX experiments on the space station,” says Dietrich. The FLame Extinguishment Experiment (FLEX) was analyzing the effectiveness of fire suppressants by studying burning fuel droplets in the CIR, when researchers accidentally made a surprising discovery related to cool flames, or apparent continued “burning” after flame extinction under certain conditions.

Currently scientists are conducting a set of experiments known as the Advanced Combustion via Microgravity Experiments (ACME) on the orbiting laboratory. These tests are grouped together because they use the same modular set of hardware on the station. Together they will yield data that could help improve fuel efficiency and reduce pollutant production in practical combustion on Earth.

One of these ACME investigations, known as Flame Design, focuses on soot, the carbon residue left behind when organic matter (or other carbon-containing material) does not fully burn. Soot causes environmental and health issues, but also can be helpful in various ways; for example, by enhancing radiant heat. Radiant heat is the reason you feel warmer standing in direct sunlight than when you stand in the shade.

Normally, most flames on Earth burn in air. Inert gas is introduced at the same time as oxygen for combustion on Earth. This investigation instead introduces the inert gas with the fuel, rather than with the oxygen. “It turns out, it has a big impact on the flame,” says principal investigator Richard Axelbaum. “In this case, even though the temperatures of the flames may be the same whether you introduce the inert with the oxidizer or the fuel, the impact for soot formation or flame strength is substantially different.”

The Flame Design investigation is studying the quantity of soot produced under different flame conditions. Each test produces a flame and may produce soot clusters that glow yellow when hot. These clusters grow larger in microgravity than on Earth because the soot remains within the flame longer.

This experiment’s results could enable the design of flames that are more sooty or soot-free, depending on the need of a specific application. “When you’re completely finished with the combustion process, in general you want to have complete burnout of all the soot. That’s true when you’re producing power,” says Axelbaum. “There are some other cases where your goal is to produce carbon black which is a form of soot.” For the most part though, these results may help create more efficient and less polluting burner designs.

The knowledge gained from these combustion experiments aboard the orbiting laboratory is helping us better understand fire here on Earth, but it will be crucial when preparing for future missions beyond low Earth orbit. “Part of the future is looking at partial gravity,” says Stocker. “Understanding that will be important for fire safety on other worlds, like the Moon or Mars.” How Your Tesla Is Learning To Drive Itself