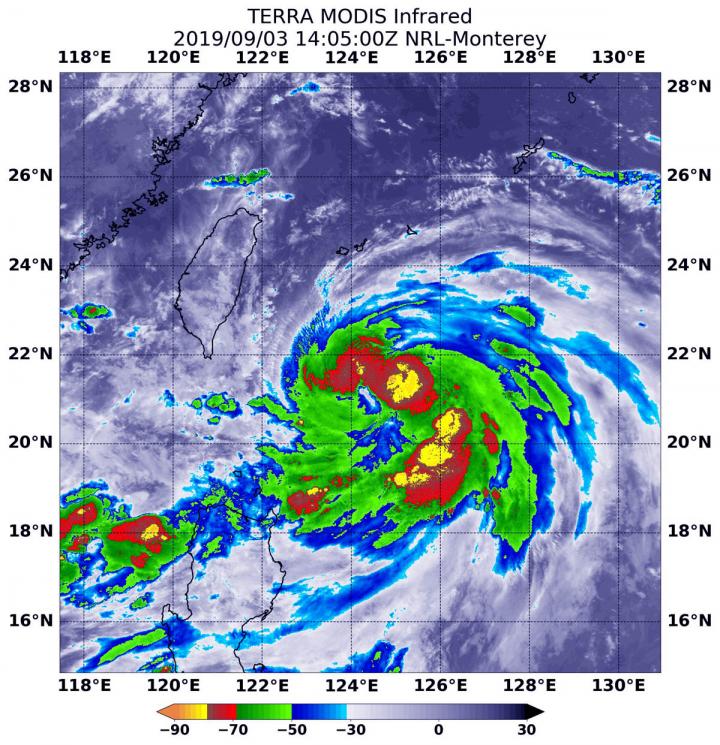 The storm that became Typhoon Lingling strengthened very quickly in the Northwestern Pacific Ocean and infrared imagery from NASA revealed the powerful thunderstorms fueling that intensification.

Lingling formed on Sept. 2 as Tropical Depression 15W and strengthened quickly into a tropical storm and then a typhoon.  Although Lingling is to the northeast of Luzon, northern Philippines, there are still some warning signals in effect on Sept. 3. Tropical cyclone wind signal #1 is in effect over the Luzon province of Batanes.

On Sept. 3 at 12:05 p.m. EDT (1405 UTC), the Moderate Imaging Spectroradiometer or MODIS instrument that flies aboard NASA’s Terra satellite used infrared light to analyze the strength of storms within the typhoon. NASA researches these storms to determine how they rapidly intensify, develop and behave.

MODIS found those strongest storms were northeast and southeast of the center of circulation where cloud top temperatures were as cold as minus 80 degrees Fahrenheit (minus 62.2 Celsius). NASA research has found that cloud top temperatures that cold indicate strong storms with the potential to generate heavy rainfall.

At 11 a.m. EDT (1500 UTC), the Joint Typhoon Warning Center or JTWC said that Typhoon Lingling, known locally in the Philippines as Liwayway was located near 21.4 degrees north latitude and 124.2 degrees east longitude. That is 364 nautical miles southwest of Kadena Air Base, Okinawa, Japan. Lingling was moving to the north and had maximum sustained winds near 65 knots (75 mph/120.3 kph).

JTWC forecasters said that Lingling is moving north and is expected to intensify to 100 knots (115 mph/185 kph) upon passing east of Taiwan. The system will then weaken on approach to the Korean peninsula, but still be at typhoon strength.