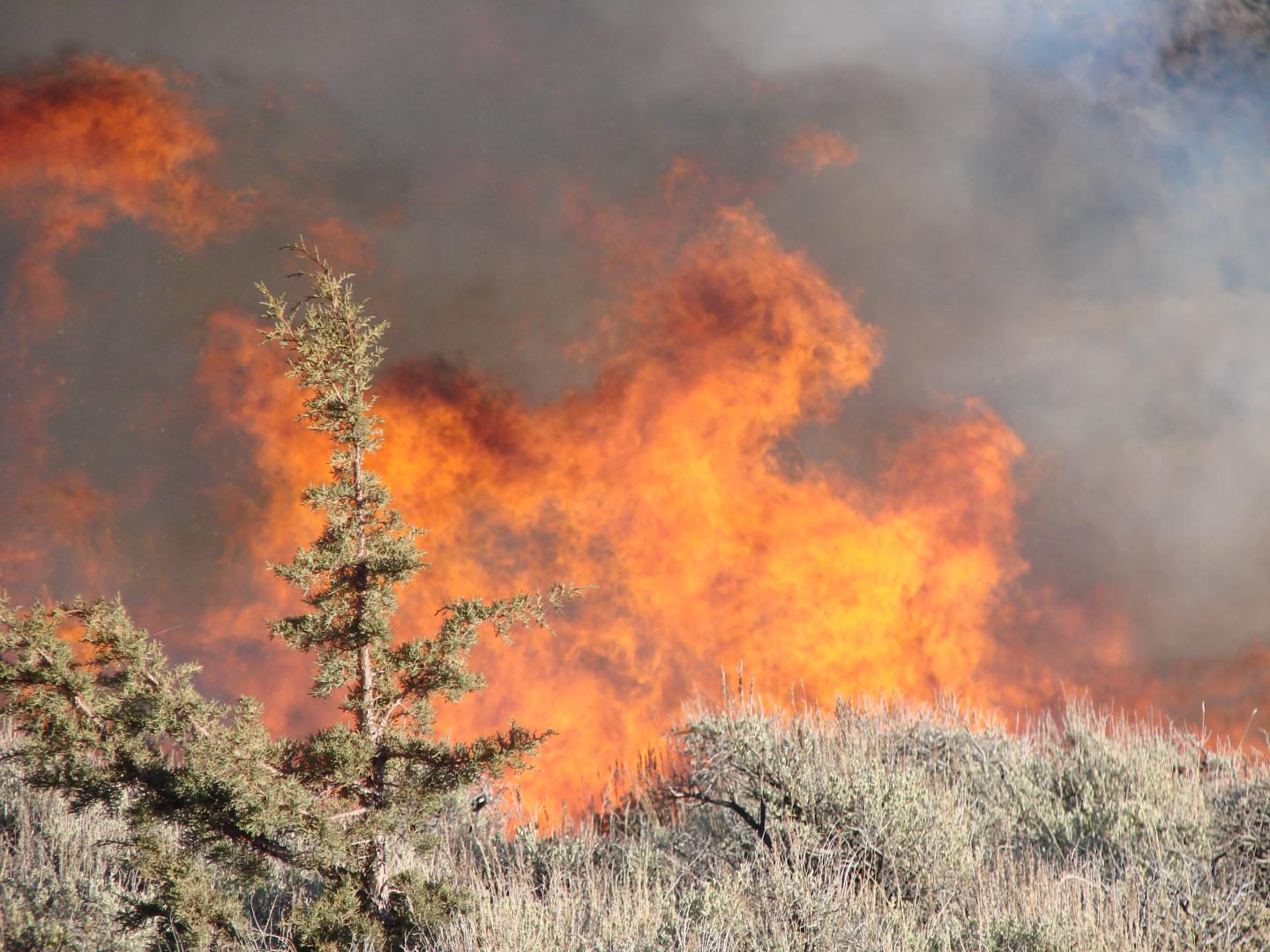 BURNS, OREGON, August 19, 2019–Burning invasive western juniper increases the time–post-fire–that native mountain sagebrush will remain the dominant woody vegetation in the plant community by at least 44 percent compared to cutting juniper back, according to a new study in Ecology and Evolution by Agricultural Research Service (ARS) scientists and their collaborators.

It is important to maintain sagebrush as the dominant woody vegetation in sagebrush steppe communities in the northwestern U.S. where western juniper (Juniperus occidentalis Hook) is encroaching on and replacing sagebrush. Among the benefits are providing endangered sage-grouse better long-term habitat. However, as soon as juniper cover reaches 3 percent, sage-grouse stop using the area. In addition, juniper encroachment greatly increases erosion risks, and reduces forage production by 2- to 10-fold, depending on the specific site.

A team of scientists from the ARS Range and Meadow Forage Management Research Laboratory in Burns, Oregon, Oregon State University and The Nature Conservancy compared the results of prescribed burns with areas where cutting down juniper was employed as the control method at 77 sagebrush steppe locations in Southeastern and Southcentral Oregon, Northern California and Southwestern Idaho.

The researchers looked at ecological data for as long as 33 years after either fire or cutting down juniper was used to control junipers.

“Counter to commonly held beliefs, what we found was prescribed burns were a better conservation practice for encouraging long-term sagebrush dominance in areas that had been encroached upon by western juniper compared to mechanically cutting,” ARS rangeland scientist Kirk W. Davies said.

Previously, shorter term studies had suggested that cutting was a more effective practice.

“If we need to restore immediate sagebrush dominance in an area that is a mix of juniper and sagebrush, cutting will achieve that,” Davies pointed out. “But if we want longer term sagebrush dominance, prescribed burning of encroaching juniper can be a logical choice.” Both fire and cutting have critical roles in the conservation of sagebrush communities.”

Removing juniper by cutting is significantly more expensive than using prescribed fires. But cutting does not result in any immediate loss of sagebrush and sage-grouse habitat as prescribed burning does.

Evaluating cutting and prescribed burn effects over an extended time not only provided evidence that prescribed burns provided extended juniper control, it also validated the ecological model that had predicted this outcome.

“We wanted to evaluate the effectiveness of cutting versus prescribed burns because we thought we were observing more young juniper trees in areas that had been cut in the last decade or so compared to burned areas,” Davies explained.

With this research, federal and state land management agencies and private landowners will be able to make better decisions about selecting control methods.

“In the end, if you burn, in the long run you will have a lot more sagebrush habitat,” Davies said. Poster of the Week  What’s scarier than spooky criters on Friday the 13th? Source to sink across the midcontinent: Geosciences from the Rockies to the gulf