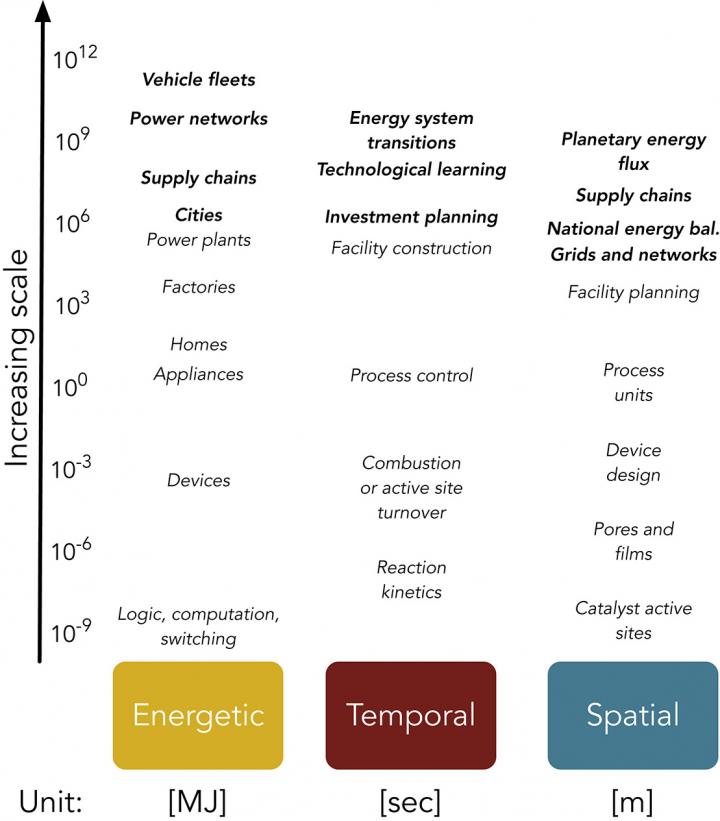 IMAGE: Phenomena of interest to macro-energy systems are listed in bold. view more

What types of electricity storage could have the biggest impact globally for a low-carbon energy future? Can humanity simultaneously de-carbonize energy and extend heat, lighting and transportation to more than a billion people now living with without modern energy services?

These are the types of big-picture questions that are being answered by the research that fits into a new academic discipline–“macro-energy systems”–proposed by a group of researchers led by Stanford University.

“Macro-energy systems as a discipline illuminates the dynamics, benefits, costs and impacts of large-scale energy system transitions,” says Sally M. Benson, co-director of Stanford’s Precourt Institute for Energy and senior author of the perspective published Wednesday in the academic journal Joule. Benson is a professor in Energy Resources Engineering.

The new discipline would addresses topics that account for a large portion of energy use, like the global car fleet, or cover vast geographical regions, like supply chains, or that cover decades, like energy investments. The large spatial, temporal, or energy scale of these issues requires researchers, no matter what department or discipline they come from, to use similar techniques like modeling and abstraction.

Formalizing this research and education as a discipline would have many benefits, Levi says. Discipline-specific journals, conferences and funding bodies would improve research by establishing core methods and terminology, making peer review more credible, fostering collaboration, and avoiding redundant work.

“An example of the pitfalls of not doing this is the sphere of ‘energy analysis,’ which is also called ‘net energy analysis,’ and ‘energy return on investment’ analysis. This concept has been re-invented numerous times over decades from multiple directions by multiple actors, but still lacks a consistent methodology,” says co-author Michael Carbajales-Dale, who heads the Energy-Economy-Environment Systems Analysis group at Clemson University, where he is an assistant professor in the Environmental Engineering & Earth Sciences Department.

The creation of macro-energy systems will also help its practitioners convince other researchers, policymakers, companies and funders of the value of their research, the authors write.

“Unification of different areas under the umbrella of macro-energy systems will also make it more identifiable for new students, and in turn help them find jobs after they complete their education because relevant hiring managers will understand what they studied,” says co-author Simon Davidsson Kurland, a postdoctoral researcher at Chalmers University of Technology in Sweden.

As first steps, the authors ask that academics who think that their work is described by the paper begin to identify their discipline as macro-energy systems and champion that term with their peers. Second, they envision a meeting to chart the scope and direction of research and education in the discipline.

John Weyant, Stanford professor in Management Science & Engineering and director of the Energy Modeling Forum, is also a co-author of the study, as is Adam Brandt, associate professor in Stanford’s Energy Resources Engineering Department.

People interested in a future workshop about macro-energy systems and otherwise helping to develop a community around this discipline can connect with the authors here, which also includes a select bibliography of research relevant to macro-energy systems.