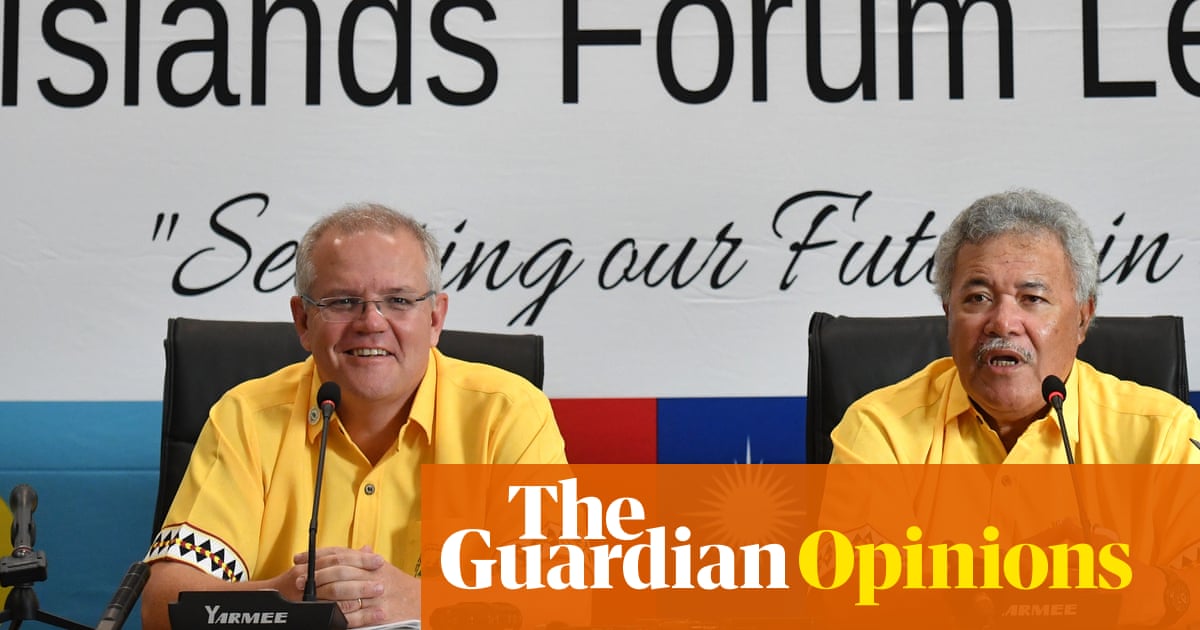 We’ll get to climate, and the rumble in the Pacific, but I want to begin closer to home. It’s been a busy news week, so you might have missed an excellent story from my colleague Adam Morton on Tuesday revealing that a coalmine in Queensland has nearly doubled its greenhouse gas emissions in two years without penalty under a Morrison government mechanism that is supposed to impose limits on industrial pollution.

According to documents released under freedom of information laws, mining company Anglo American was given the green light under the safeguards mechanism to increase its emissions by about 1m tonnes at its Moranbah North mine, in central Queensland. The case study matters, because it helps us separate spin from substance.

Since taking the prime ministership last year, replacing Malcolm Turnbull, who lost the long war with the right of his party in part because of his desire to pursue emissions reduction, Scott Morrison has been trying to project a sense that everyone just needs to calm down on climate change.

We all need to stop panicking, and causing a big ruckus, because the Coalition has sensible, practical policy mechanisms to ensure Australia meets our international commitments.

Campaign calm down is part of Morrison’s ongoing effort to straddle two domestic constituencies: the coal communities who worry Labor has abandoned them in the service of climate science, and Liberal voters in the cities who think climate change is a real thing, and the government should do sensible things to try to avert it.

To the coal communities, Morrison projects a disposition of “I’m on your side”. To moderate, rusted on, Liberal voters in the cities, Morrison regularly accepts the science of climate change, and signals he is not crazy retrograde on this stuff, like Tony Abbott was.

His objective is to present as Mr Sensible; the pragmatist who will make a proportionate policy commitment and get it done. So there is no need for people to heed the (alleged) hyperventilations of activism, or have nightmares about melting Icelandic glaciers, burning permafrost in the Arctic, or tipping points – thresholds that, if passed, could send the Earth into a spiral of runaway climate change.

It’s all under control, kiddos.

There’s just one problem with this.

Things are not under control.

A brief recap of what’s going on here will assist.

Tracking back to Anglo, and the doubling of emissions. As things stand now, Australia has a safeguards mechanism that’s supposed to curb pollution, but allows pollution to rise.

We can move next to the emissions reduction fund, which is supposed to be the centrepiece of the Coalition’s emissions reduction efforts. The ERF came back into service just before the election as part of the signalling to worried Liberal voters that Scott wasn’t Tony on climate change. (Kind of ironic, Scott telegraphing a new, less insane climate change chapter, by rebooting Tony’s fund).

This was supposed to be good news, but we knew the ERF mechanism was already deeply problematic before its pre-election revival, given emissions in Australia have been rising ever since the Coalition repealed Labor’s carbon price (which actually lowered pollution) and replaced it with the fund. Recently, we’ve had yet more evidence suggesting the ERF is not fit for purpose. There was an auction process recently, and it yielded cuts equivalent to only 0.01% of Australia’s annual greenhouse gas pollution.

Now we’ve arrived at the Coalition’s carbon budget, which is really the linchpin of campaign calm down. Periodically, Morrison gets pressed on the gap between what he contends is happening and what is actually, demonstrably happening. When this inconvenience presents, voila, out comes the carbon budget (which in simple terms, is the actions to reduce pollution that will be undertaken between now and 2030 to ensure Australia hits the Paris target).

Morrison would like voters to know his carbon budget exists, because it’s a prop to aid his prime ministerial performance. But I strongly suspect he doesn’t want people looking at it too closely, because it’s rubbery. A couple of quick examples. Almost 100 megatonnes of pollution reduction is booked to “technology improvements”. What those improvements might be is entirely unclear.

There’s more abatement booked to an electric vehicles strategy that doesn’t exist, or if it does, nobody knows about it. I’d make a joke about invisible electric vehicles but none of this is funny, and it seems too soon, given we are all still processing the war on the weekend.

Finally, there’s the big accounting hey presto. Carry-over credits (an accounting system that allows countries to count carbon credits from exceeding their targets under the soon-to-be-obsolete Kyoto protocol periods against their Paris commitments) deliver a 367-megatonne contribution to our 2030 emissions reduction effort. That sounds a lot, because it is a lot. It’s basically about half the designated task.

If we were in a court proceedings, we’d submit this brief of evidence, and the verdict would be short, sharp and simple: things are not under control when it comes to Australia meeting our Paris target, and we have crap policies to deal with the most serious policy challenge we face.

Having established that, let’s move now from the domestic picture back to the Pacific and beyond.

Pacific leaders are fully aware that things are not under control when it comes to Australia’s climate change efforts. You can understand their impatience. They are standing on the frontline of a climate crisis, and trying to prod laggards around the world. The Pacific needs the big emitters, and countries that can influence them, like Australia, to stop obfuscating and start acting while we’ve got a chance of averting the worst scenarios.

So, this week, entering the global arena, Morrison found himself wedged between the campaign calm down offensive at home, and Australia’s demonstrable absence of climate leadership. This cycle will repeat again and again as Australia fronts up to the rolling international discussions about climate change, unless the government can find the will to get serious.

Speaking of the sequence of global discussions, the next milestone is the United Nations climate summit in September. Pacific leaders, who exert significant moral leadership given the existential threat they face, will have wanted to emerge from this week’s Tuvalu forum with the strongest collective statement possible to project ambition at the UN.

Morrison will attend the UN in September, and ahead of those discussions, the secretary general, António Guterres, has already written to Australia asking the government (and, of course, other governments) to outline plans to achieve net zero emissions by 2050.

This is all pretty depressing, but there is one glimmer of light on the horizon. Despite all the arm twisting in Tuvalu, Australia did, in the end, sign up to a statement that commits us to pursuing efforts to limit global warming to 1.5 degrees, and to produce a 2050 strategy by 2020. That would be next year.

By signing up, Morrison has pushed the government past the Paris horizon, meaning Australia has entered a new round of policymaking on emissions reduction. Bear in mind emissions reduction has generated civil war inside the Liberal party for much of the past decade.

If you were into conspiracy theories, you might speculate that Morrison made a lot of noise in the Pacific about protecting Australia’s coal industry to provide cover internally as he piloted the government into the post-Paris phase of proceedings without unhinged mayhem breaking out on 2GB or Sky News.

The statement issued after the Pacific forum notes this post-Paris phase “may include commitments and strategies to achieve net zero carbon by 2050”.

Shhh. Whatever you do: don’t tell Craig Kelly. One of America’s 2 Icebreakers Is Falling Apart.  Trump’s Wall Could Block Funding for a New One. Australia to cull over two million feral cats by 2020