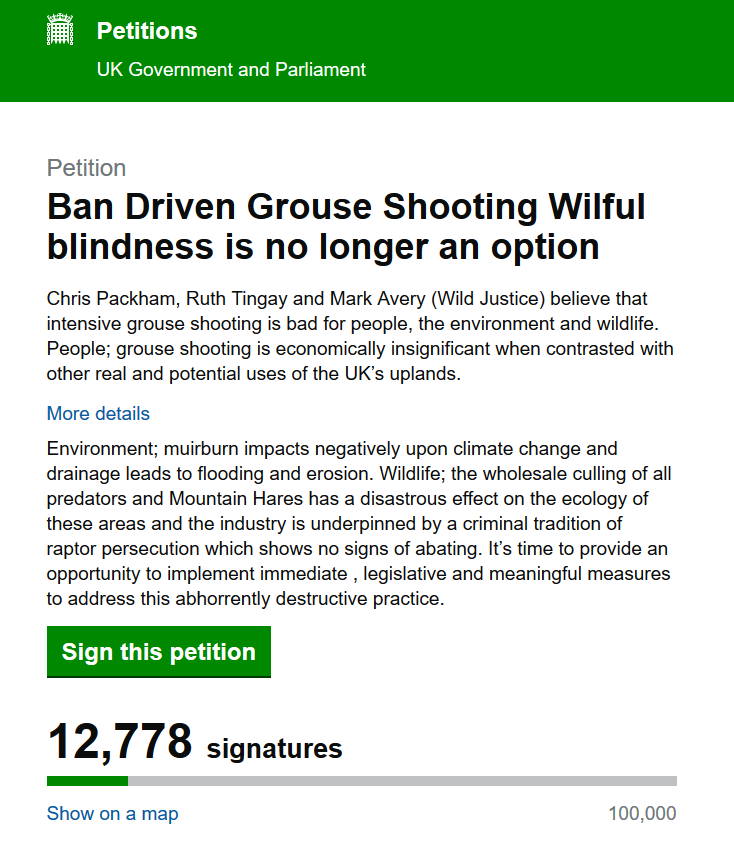 The petition was submitted by Chris Packham on behalf of Wild Justice on 4 July and got the requisite five signatures to go into the system on 5 July. Quite why it has been stuck in the system for nearly six weeks has not been explained, but other petitions, submitted later, have appeared already. It’s very odd.

Whatever the reason for such a delayed start, when it appeared yesterday at about 430pm (when all three Wild Justice directors were in a meeting with Natural England) it sat still, as if it were taking a deep breath, until about 6pm and then it started a sprint which got the petition past its first target of 10,000 signatures (which will trigger a Westminster government response) before 11pm.

Many of the readers of this blog have seen it all before and will have memories of such e-petitions over recent years. We thought hard about whether or not to launch another – not because we doubt that a ban of driven grouse shooting is the right thing for people, the environment and wildlife, but because we wondered whether a petition was the right way to advance the cause of upland eco-tourism, blanket bog conservation, raptor protection, rewilding, protection of Mountain Hares etc etc. Our judgement is that this is a great time to have another petition and that such a petition is necessary – it’s needed more now than ever before.

That’s our judgement. We don’t see much hope of much action by our current crop of government politicians but that won’t bother us. Only if the public fails to support this petition with even more enthusiasm than earlier ones will we doubt our decision. So, it’s up to you all.

Here’s the link to the petition where you can prove us right – please sign this brand new e-petition calling for a ban on driven grouse shooting. Wilful blindness is no longer an option.