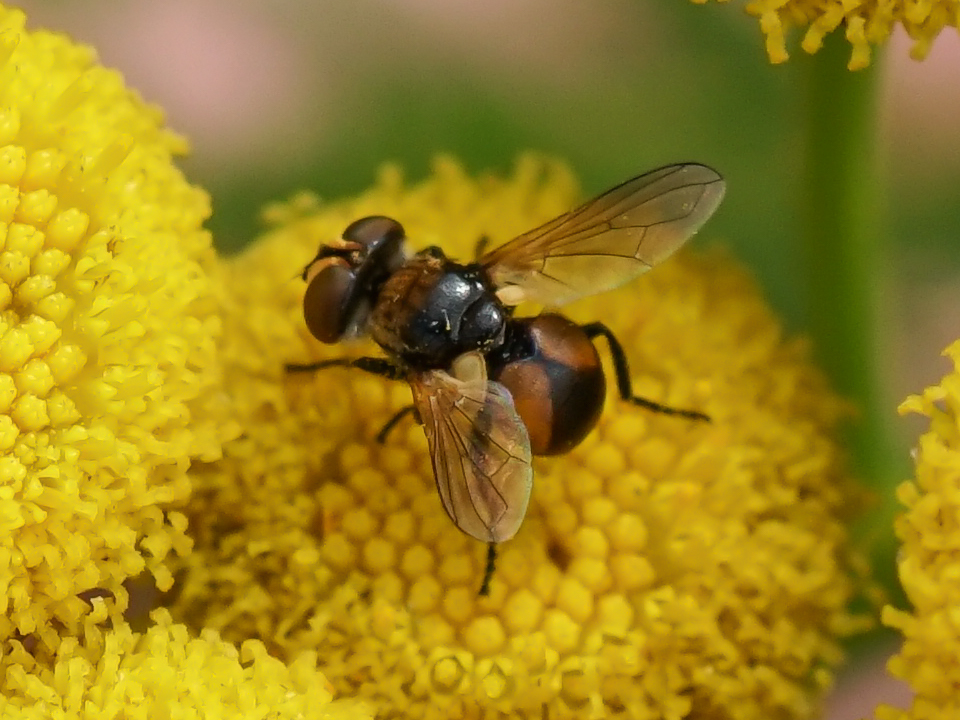 Paul writes: If this was a bird, rather than a fly, I would expect to look out of my kitchen window and see half a dozen people with scopes and binoculars walking up and down the field path, all hoping to add to their Yorkshire List. As it is, flies are not so sought after.

I found this one last week feeding on a Tansy plant, in the field next to my house, in Hunmanby, North Yorkshire. It was a tiny thing, about 5mm long, but it looked quite interesting with its dumpy body and large head. I didn’t think I’d seen one before so I took a few photos in the hope of identifying it. Once I looked at the images I realised what a beautiful little fly it was. I eventually got it identified as Cistogaster globosa, a Tachanid Fly, I then discovered that it is not known this far north. There is a Tachanid Recording Scheme, run by a few dedicated people, and from their records this is the most northerly sighting of the species, by quite a long way. In 2015 it hadn’t been found in Yorkshire and in 2017 there were only two records, both near Barnsley. Other than that it is quite a southern species, perhaps it is one of the many species expanding their range northwards as the climate gets warmer. Since getting interested in recording flies I’ve been amazed at the number of people who also record them. They’re not as numerous as birdwatchers but are still a large group and probably equally obsessive at times.

In store or online — what’s the most environmentally friendly way to shop? We Can Do This