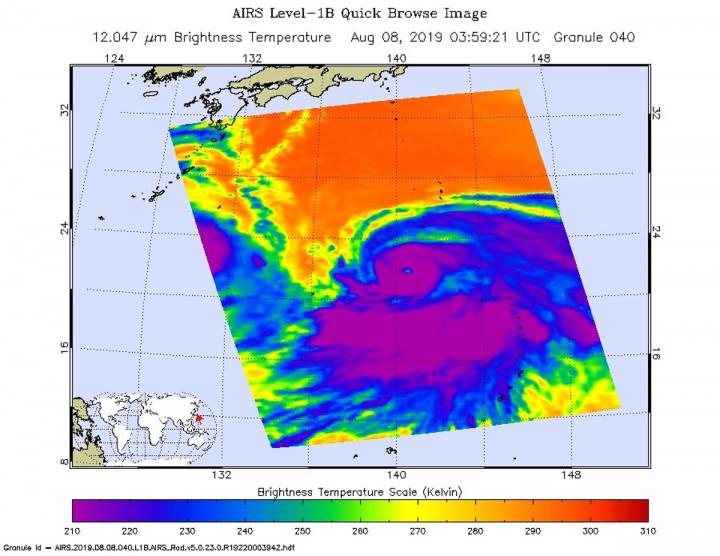 Typhoon Krosa is a large storm moving through the Northwestern Pacific Ocean and infrared imagery from NASA’s Aqua satellite revealed that the large typhoon also has a large eye.

Early on Aug. 9, the Joint Typhoon Warning Center noted that infrared data revealed that Krosa has an eye that is 40 nautical-miles wide.

At 5 a.m. EDT (0900 UTC) on Aug. 9, the center of Typhoon Krosa was located near latitude 22.0 degrees north and longitude 141.2 degrees east. That puts the center of Krosa about 168 nautical miles south of Iwo To island, Japan. Krosa was slowly crawling toward the east. Maximum sustained winds were near 85 knots (98 mph/157 kph).

The Joint Typhoon Warning Center expects that Krosa will turn northwest, and pass to the southwest of Iwo To island, Japan. It is then to continue tracking northwest and pass east of Minami Daito Jima, Kadena and Amami Oshima, on its way to the four main islands of Japan. Krosa is also expected to weaken over the next five days. How The IPCC Created A ‘Scientific Consensus’ On Global Warming

How to avoid the bite of a kissing bug