This blog is based on Mike Alibone’s blog on the same subject – a must read every week (or more) for Northants birders and with enough interesting information to be of wider than local interest.

I’ve become a little blase about Cattle Egrets in the last 12 months as there have been regular sightings of up to four birds at my local patch of Stanwick Lakes. I’ve seen them a few times but it is by following Steve Fisher’s almost daily sightings on Twitter (@stanwicktramp) and the sightings of others tagged with #northantsbirds that I keep up to date.

I think I saw my first Cattle Egret in the Camargue many years ago, in the 1980s, but I didn’t see my first one in the UK until my birthday in 2008 – 11 years ago. And that bird was on the Northants/Cambridgeshire border and, I think, in Cambs.

But after regular records over the winter which lasted into the spring and summer at Stanwick Lakes it has been pretty apparent that they have been breeding somewhere not a million miles away.

Given that this species was first recorded in Northants as recently as 2006 it’s a pretty rapid establishment to be breeding in 2019. 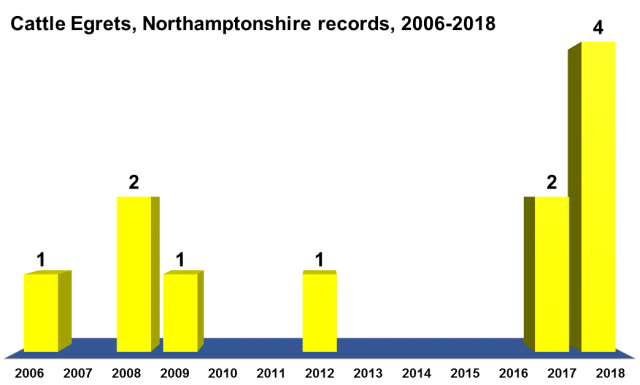 But breed they have – and the young are fledging now.

At Stanwick Lakes now, Little Egrets are common, Great Egrets are very regular and Cattle Egrets have made their appearance. Yesterday 4 Spoonbills apparently flew through. In winter you can regularly see Bitterns nowadays.

When I first began living in Northants, in 1983, I would not have imagined that paragraph being true of my local birding patch. Times are a changing.

Always roast as many vegetables as you can