Why The Changing Climate Is Especially Hard On India : Goats and Soda – NPR

A kid tries to beat the heat in New Delhi on June 15. The changing climate is especially brutal in India. Temperatures are soaring. Asphalt roads are melting. People are dying. Nasir Kachroo/NurPhoto via Getty Images hide caption 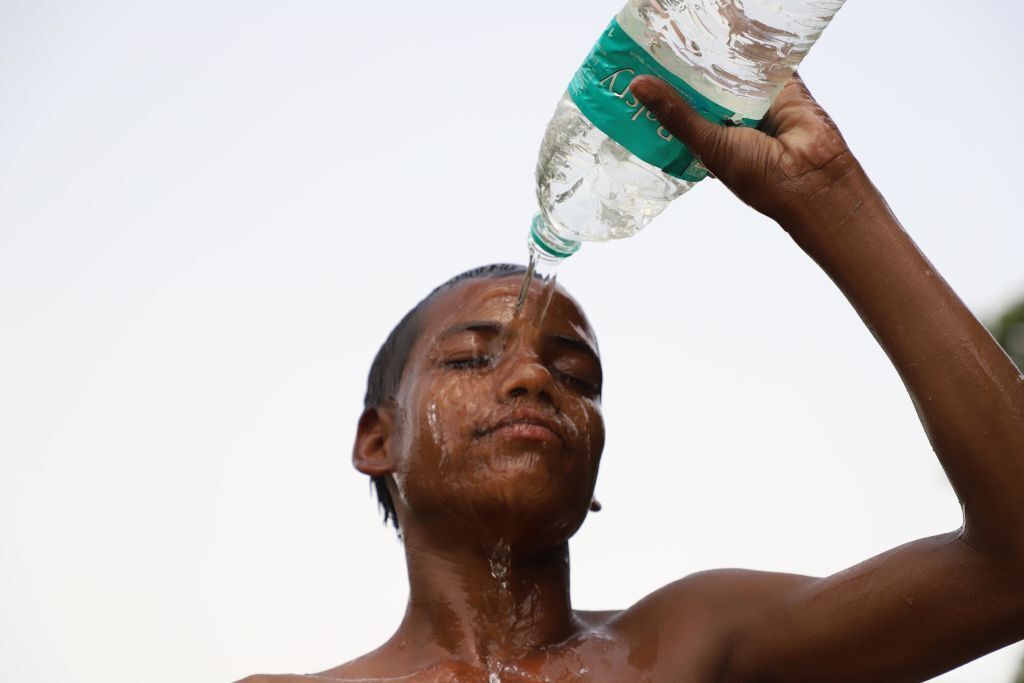 A kid tries to beat the heat in New Delhi on June 15. The changing climate is especially brutal in India. Temperatures are soaring. Asphalt roads are melting. People are dying.

Nobody knows exactly when the truck will arrive. Its schedule varies. But when it pulls up — sometime in the morning and then again after dusk — it’s often the neighborhood children, playing cricket in the street, who are first to sound the alarm.

“Tanker! Tanker!” the children yell in unison, alerting their neighbors to a precious delivery from the Indian government: water.

The neighbors all drop what they’re doing, grab jerrycans and buckets and get in line. They need to collect enough water for all their washing, cooking and drinking. Sometimes brawls break out.

This scene, in a New Delhi slum, has been repeated this spring and summer across India, where heat waves and water shortages have left millions desperate. Many reservoirs have dried up. As temperatures top 120 degrees Fahrenheit, municipalities are delivering water by tanker. Hospitals report a spike in heat-related deaths. Asphalt roads melt.

Experts say this could be the new normal in India’s already-sweltering, overcrowded cities.

“India is going to be perhaps the most hit by a changing climate,” says Arunabha Ghosh, CEO of India’s Council on Energy, Environment and Water. He cites India’s geography, near the equator and the tropics, its poverty, high population and relative lack of energy resources. “How well prepared are we? I would say not very well prepared.”

In New Delhi, behind the American Embassy School, where high school costs more than $30,000 a year, a slum has burgeoned in recent years with migrants from the countryside. Two decades ago, it consisted of about 500 tidy cinder block houses, residents say. Now it has more than 5,000 — and none with indoor plumbing. They all share a communal water tap.

But it went dry two summers ago.

“What can we do?” asks Bhagwati Devi, 59, squatting amid buckets in the courtyard of her two-room home, waving a wicker fan. “We’re trying to manage.”

Bhagwati Devi, 59, sits in her two-room home, surrounded by jerrycans and buckets in which she stores water that’s delivered. The communal tap for her neighborhood dried up two years ago. Furkan Latif Khan/NPR hide caption

Devi and her neighbors now rely solely on free government tanker deliveries for all their water needs.

There’s an economic impact as well. Researchers at Stanford University looked at India’s economy between the years 1960 and 2010 and concluded that the country’s total economic output, or GDP, may be 31% less than it would have been in the absence of global warming.

“Most of the people want to come here to Delhi to earn money. So the city’s getting more crowded and more hot, because of more vehicles and pollution,” says Sandeep Kumar, 24, who works at the American Embassy School. “Even the cold drinks are getting more expensive.”

“And you crave it more!” Kumar exclaims. “Because it’s hotter.”

But despite the heat, India’s economy is growing fast. Millions of Indians are emerging from poverty — buying cars, moving to the city and consuming more energy. Currently only about 6% of Indian households have air conditioning. But manufacturers say they expect double-digit sales growth this summer.

It feels like there’s a new appliance shop on every street corner.

In one such shop, in a busy Delhi marketplace, an air conditioner salesman, Arun, who goes by one name, says about 30% of his customers are first-time buyers — newcomers to the middle-class, air-conditioned lifestyle.

By 2022, India is forecast to have a quarter of world’s AC units. That could exacerbate an already-alarming rate of warming, says Tarun Gopalakrishnan, a climate change expert at the Centre for Science and Environment in New Delhi.

“Because what air conditioning essentially does is cools the interiors for a few people, while making the ambient weather far worse for others,” Gopalakrishnan says. “It cools bedrooms while spewing heat out into the open.”

The United Nations Intergovernmental Panel on Climate Change estimates that the global temperature rose 0.85 degrees Celsius in the 20th century. But in India, that figure is at least 1.2 degrees Celsius — and climbing. The Paris Agreement, ratified in 2016, suggests that all countries try their best to limit warming to under 1.5 degrees Celsius — a threshold that India is fast approaching.

“The effects of crossing that threshold are much more serious than initially anticipated and particularly in regions of the world like India — closer to the equator and the tropics — and particularly in developing countries where there are large vulnerable populations to begin with,” Gopalakrishnan says. “That India has been warming at a higher pace should be enormously concerning.”

But in the slum behind the American Embassy School in New Delhi, many residents have never heard of the phrase “climate change” or “global warming.”

Shakuntala Devi, 26, a mother of three, washes dishes in the courtyard of her home in a crowded slum near the American Embassy School in New Delhi. Her home has no running water, so Devi has to fetch water in jerrycans from a government tanker truck. Furkan Latif Khan/NPR hide caption

“I may have heard something about it on television once, about shortages,” says Shakuntala Devi, a 26-year-old mother of three, as she washes clothes by hand on a cement floor.

She says she has been too busy fetching water and trying to cool her family with an electric fan to pay much attention.

Climate change: The warnings about the global warming crisis are stark – meet the people who are already living it – Sky News