VATICAN CITY (Reuters) – Pope Francis said on Friday that carbon pricing is “essential” to stem global warming – his clearest statement yet in support of penalising polluters – and appealed to climate change deniers to listen to science.

Pope Francis addresses energy representatives at the end of a two-day meeting at the Academy of Sciences, at the Vatican, June 14, 2019. Vatican Media/Handout via REUTERS

In an address to energy executives at the end of a two-day meeting, he also called for “open, transparent, science-based and standardised” reporting of climate risk and a “radical energy transition” away from carbon to save the planet.

Carbon pricing, via taxes or emissions trading schemes, is used by many governments to make energy consumers pay for the costs of using the fossil fuels that contribute to global warming, and to spur investment in low-carbon technology.

The Vatican said attendees of the closed-door meeting at its Academy of Sciences, a follow-up to one a year ago, included the CEOs of Royal Dutch Shell, Eni, BP, Repsol, Conoco Phillips, Chevron, ExxonMobil, and executives of investment funds.

“Collectively, these leaders will influence the planet’s future, perhaps more than any in the world,” said Father John Jenkins, president of the U.S. University of Notre Dame, which organised the meeting.

A small group of demonstrators gathered outside a Vatican gate. One held a sign reading “Dear Oil CEOs – Think of Your Children”.

Francis, who has made many calls for environmental protection and has clashed over climate change with leaders such as U.S. President Donald Trump, said the ecological crisis “threatens the very future of the human family”.

“WE HAVE FAILED TO LISTEN”

He criticised those who, like Trump, doubt the science that shows human activity is causing the earth to heat up.

“For too long we have collectively failed to listen to the fruits of scientific analysis, and doomsday predictions can no longer be met with irony or disdain,” Francis said. Discussion of climate change and energy transition must be rooted in “the best scientific research available today”.

Trump, asked in an interview if he accepted climate science, said last week: “I believe there’s a change in weather, and I think it changes both ways.”

He has said the United States will withdraw from the Paris accord, a 2016 global agreement to fight climate change.

Francis, who wrote an encyclical – a significant document on Church teaching – in 2015 on protection of the environment, and strongly supports the Paris accord, said time was running out to meet its goals.

“Faced with a climate emergency, we must take action accordingly, in order to avoid perpetrating a brutal act of injustice towards the poor and future generations,” he said.

“We do not have the luxury of waiting for others to step forward, or of prioritising short-term economic benefits.” 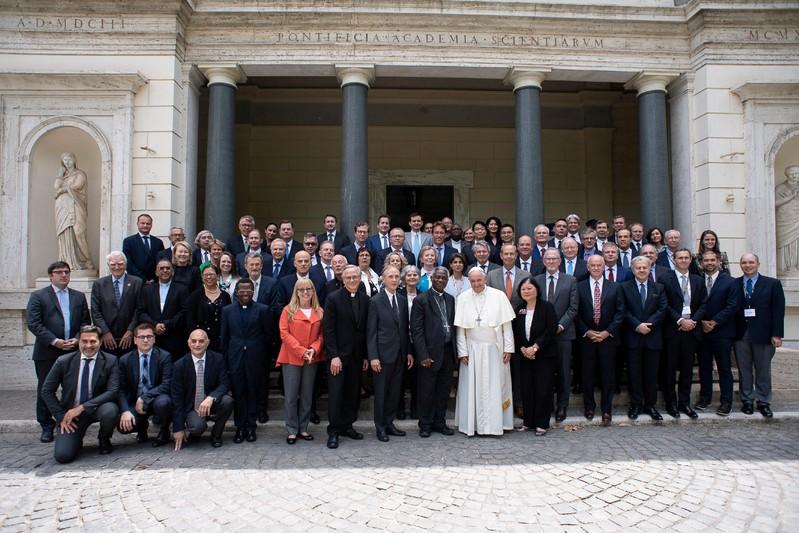 Oil companies have come under growing pressure from investors and activists to meet the Paris goals.

Companies including Royal Dutch Shell, BP and Total have laid out plans to expand their renewable energy business and reduce emissions. Critics say such gestures are minor parts of businesses that overwhelmingly depend on an economy that continues to pollute.

BP Chief Executive Bob Dudley said after the meeting that “the world needs to take urgent action to get us on a more sustainable path and it is critical that everyone plays their part – companies and investors, governments and individuals”.

Why developing country voices will shape the global climate agenda