Has the politics of climate change finally reached a tipping point? | John Vidal

Last week a small campaign group in the staunchly conservative town of Shrewsbury called a public meeting about climate change. The organisers were delighted when 150 people turned up. Even they were surprised, though, when people unanimously said they were prepared to give up flying, change their boilers and cars, eat less meat and even overthrow capitalism to get a grip on climate change.

But this was just a straw in the political wind whipping through middle England. Shrewsbury joins more than 100 other councils across the country in declaring a climate emergency, and has pledged that it will be carbon-neutral within 11 years, with more following every week.

The stakes get higher every day. In the past week, not only have the world’s leading scientists dropped a bomb into the debate by stating, across 1,800 pages of detailed evidence, that our wholesale destruction of the biosphere threatens humanity just as much as climate change, but carbon levels in the atmosphere have reached their highest level in 800,000 years.

We are full of bright ideas to solve ecological problems. So let’s act on them | Chris Packham

So, could this be the moment when politicians recognise they have both strong intellectual reason to act urgently on the environment as well as, finally, the public backing to do so? When, instead of trying to score marginal partisan points, they believe they have the legitimacy to be non-partisan, politically bold, and to together back transformative economic and social change in pursuit of the public good? Could politics indeed be changing with the climate?

The last few months have seen the debate shift. Put it down to David Attenborough’s documentary, 1.5 million children on school strike, the charisma of Greta Thunberg, or sheer frustration with the political system, but increasing numbers of people now seem to recognise that nature’s wellbeing is a national priority.

The UK government, keen to position itself as a world leader on climate, but still promoting flying and roads and less keen to act at home, recognises the moment. Cambridge development economist Sir Partha Dasgupta has been commissioned to conduct a major study on the case for acting on biodiversity, much as Lord Stern was asked to review the economics of climate change by Gordon Brown in 2006. Stern’s 700-page report added greatly to the debate. But that was 13 years ago, since which time there have been many highly authoritative studies done on environmental economics. No new report is needed. They all argue roughly the same: that it will cost infinitely more for governments to do nothing about biodiversity and climate than to act decisively, and that to delay will increase costs further. Dasgupta can only argue that we must act soon.

Besides, while it sounds impressive to bring forward by 30 years the target for net-zero emissions, few countries think it will be too difficult. Belgium, Denmark, France, the Netherlands, Portugal, Spain and Sweden have asked the EU to set 2050 as a target for being carbon-neutral, and want 25% of the EU budget to go to fighting climate change. For the moment, governments have little to lose. Most consumers would barely notice the changes needed to get to carbon neutrality in 30 years’ time. Who noticed that Britain has just had the first week in more than 100 years of electricity without coal, or that divestment from fossil fuels has reached $8tn? People will have to buy electric cars, more efficient fridges and heating systems, and Britain will need vastly more solar capacity, bigger forests and better insulation, but these are mostly easy and popular changes. 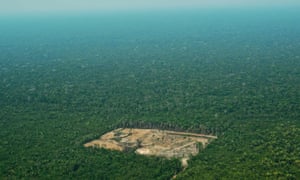 A “new green deal” budget could be brought in to fund a massive push for nature conservation and energy change. The ban on new petrol and diesel cars and vans after 2040 could be brought forward to 2030 easily enough, and few people would object to penalties for climate polluters, higher taxes for companies that destroy nature and incentives for renewable energy and energy conservation. If Heathrow never got its new runway, or we did not build more roads, or we all ate less meat, it would not hurt that much.

Indeed, it’s clear that protecting nature brings great collective rewards. Weaning ourselves off fossil fuels would clear up air pollution rapidly and save billions of pounds a year that the NHS must currently spend dealing with heart attacks, asthma, strokes and respiratory illnesses. Cities would become more liveable, the countryside more attractive. Instead of being regarded by government as a costly imposition, action on climate and nature regeneration could be easily recast as visionary politics offering huge public benefits.

But what happens when the voluntary measures run out and the warming is not seen to slow because greenhouse gases are so long-lasting? Really addressing climate and biodiversity collapse means rationing carbon. It means no more free ride for extractive industries such as mining, palm oil and forestry companies who profit from environmental destruction. It means heavy penalties for polluters, the axing of food and aviation subsidies, and taking a torch to vested interests. It means addressing the indirect causes of the crisis, such as population growth and consumerism, even rethinking the whole idea of progress and wealth.

There are dangers in both action and inaction. How will rich countries react to mass migrations from poor climate-affected countries, or to the breakdown of the food system that might ensue when climate change leads to disastrous harvests in major rice- and wheat-producing countries? Already, the UN says, there are around 2,500 conflicts over fossil fuels, water, food and land. Climate change and biodiversity loss will only increase that number.

Then there is the risk that the climate crisis could foster a new generation of authoritarian, top-down rulers who will try bypassing consumers and institutions. This is because it necessitates a major shift from the kind of individual responsibility we have grown used to in the past 50 years, to greater state action. That could easily be exploited.

It also opens the door for rich governments to propose dangerous and ill-thought-through technological fixes as a substitute for mitigation. How much simpler for cash-strapped governments to ask a few billionaires to help slow warming in the US or Europe by funding a monstrously expensive plan to preserve the Arctic sea ice by covering it with a layer of reflective silica “microbubbles”; or to deflect the sun’s rays in space; or to spray the oceans with iron filings?

But the risks of doing nothing far outweigh the possible pitfalls of really addressing climate change and biodiversity collapse. Of course there will be objections from diehard capitalists and liberals alike. But, to echo Margaret Thatcher as she pushed through the deregulation that has done so much to fuel the crisis: there really is no alternative.