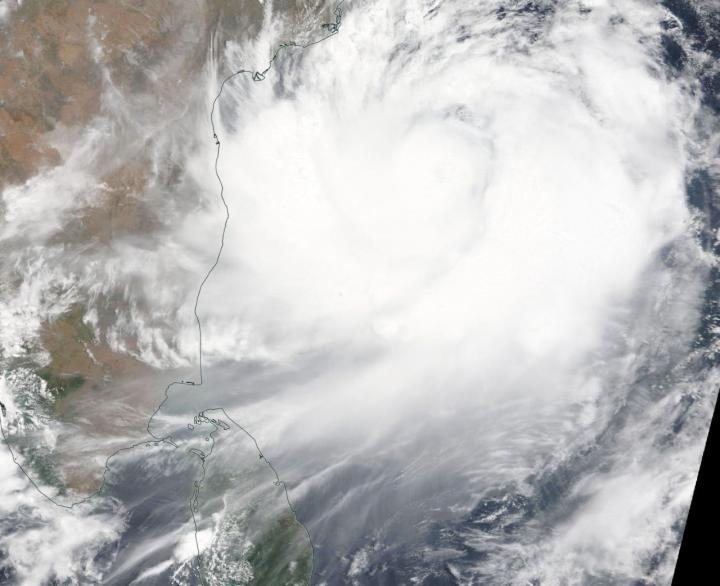 IMAGE: On May 1, 2019, the MODIS instrument aboard NASA’s Terra satellite provided a visible image of Tropical Cyclone Fani in the Northern Indian Ocean, off the coast southeastern India. view more

NASA’s Aqua and Terra satellites have been providing infrared, microwave and visible imagery of Tropical Cyclone Fani as it continued to move northward along the eastern coast of India.

Tropical Cyclone Fani continued to strengthen and move north through the Northern Indian Ocean on April 30 and May 1 when NASA’s Aqua and Terra satellite provided imagery of the strengthening storm. Fani is located off the southeastern coast of India, north of the island of Sri Lanka. Sri Lanka is an island country located southwest of the Bay of Bengal and southeast of the Arabian Sea.

On May 1, the Moderate Resolution Imaging Spectroradiometer or MODIS instrument aboard NASA’s Terra satellite provided a visible image of Fani. Fani’s center appeared to have an eye obscured by high clouds. Infrared imagery revealed that ragged eye and microwave imagery showed curved bands of thunderstorms wrapping into the eye.

Fani was located off the coast of southeastern India. It was affecting the Coramandal Coast that stretches from the southeastern tip of India to east-central India’s Andhra Coast to the north.

On May 1 at 11 a.m. EST (1500 UTC), the center of Tropical Cyclone Fani was located near latitude 15.2 degrees north and longitude 84.3 degrees east. That is about 520 nautical miles south-southwest of Kolkata, India. Fani was moving to the north and maximum sustained winds were near 105 knots (121 mph/194 kph).

The Joint Typhoon Warning Center expects Fani to continue moving north and intensify slightly as it moves over warm waters. Fani is forecast to move to the north-northeast. The India Meteorological Department forecasts Fani to make landfall along the Odisha coastline between Gopalpur and Chandbali on May 3 at hurricane-strength.

Where to find big ideas for addressing climate change