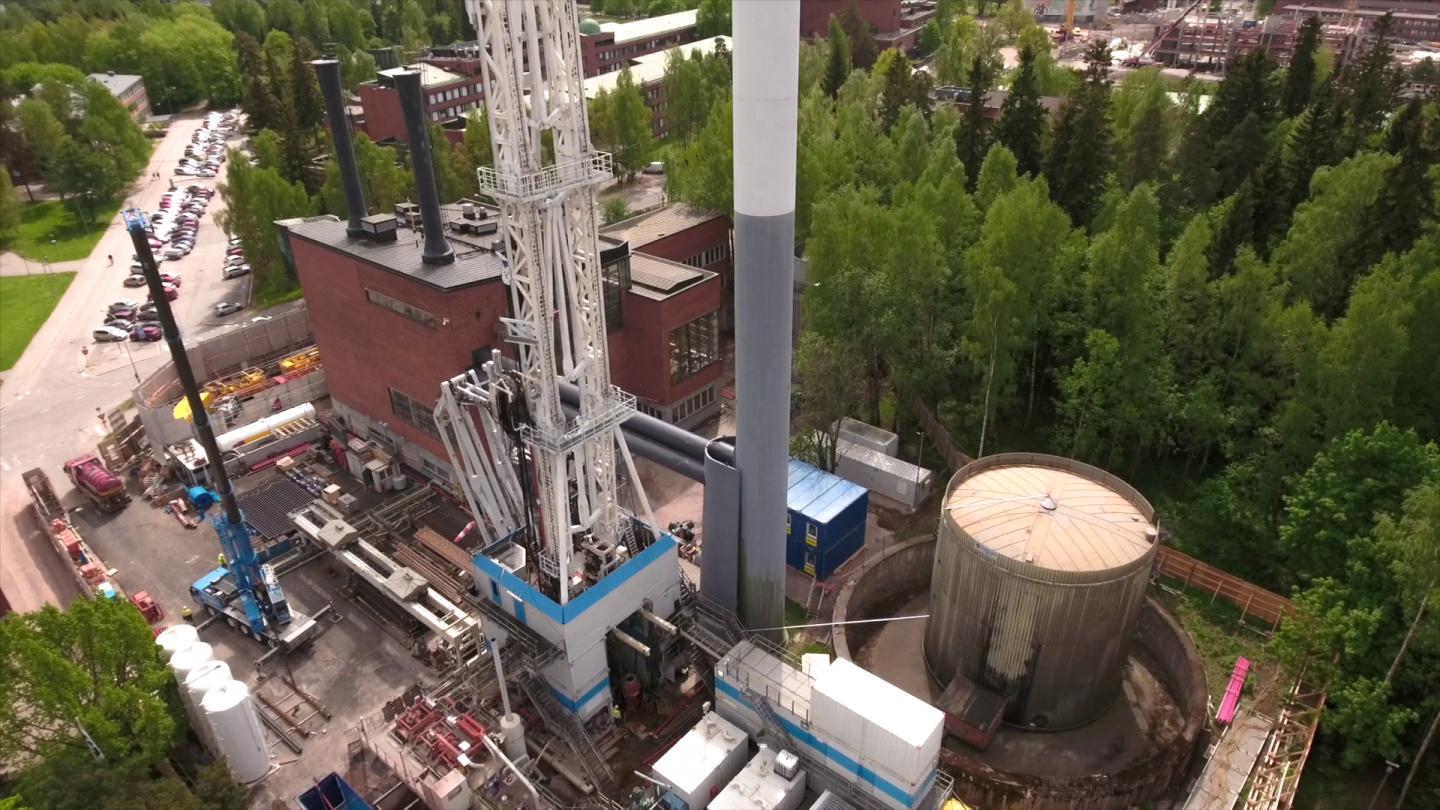 IMAGE: This is an aerial view of the St1 Deep Heat Oy project site. view more

Enhanced Geothermal Systems (EGS) are considered a promising source of energy that is clean, provides a sustainable baseload for heat and electricity and is an emerging key technology in the long-term transition to a fossil fuel-free future. However, developing a geothermal reservoir requires the forceful creation of fluid pathways in the deep underground by injecting large amounts of water under high pressure. Induced seismicity is an inevitable and well-known, yet poorly understood by-product of this technology and has caused serious public concern and scepticism leading to the shutdown of several EGS projects in the past. Managing the induced seismicity risk is therefore crucial for the development and further exploitation of EGS technology towards market-ready power and heat supply in urban environments.

In a new study now published in Science Advances a team of scientists reports on a successful attempt to control induced seismicity during the deepest-ever hydraulic stimulation of a geothermal well in Helsinki, Finland. In a collaborative effort by a team of international researchers from commercial companies, academic institutions and universities, a safe stimulation strategy was designed and successfully applied preventing the occurrence of a project-stopping induced earthquake with a magnitude larger than 2, a limit imposed by local authorities for the safe continuation of the St1 Deep Heat Oy energy project. “The near-realtime processing of seismic data retrieved from an ad-hoc installed network of borehole and surface geophones provided the critical input for the safe operation of the stimulation”, says lead-author Grzegorz Kwiatek, a scientist based at GFZ Potsdam.

In the project, a traffic-light-style system involving near-realtime seismic monitoring allowed active feedback and guidelines to the stimulation engineers on how to adjust pumping rates and pressure at the injection. Professor Georg Dresen, head of the Geomechanics group at GFZ states: “This feedback in near real-time was the key to success and allowed to deepen the understanding of the reservoir seismic response and the hydraulic energy release at depth, while ensuring promptness in the technical response to increased seismic activity”. This allowed immediate adjustment of the reservoir treatment through mitigating injection-rate and duration of resting periods that were applied in the course of the months-long experiment and ensured the successful control of maximum observed magnitude of the induced seismic events.

“While the quantitative results successfully applied here to avoid larger seismic events are not directly transferrable to other tectonic settings, the methodology and concept we developed in our study can be useful to other EGS projects to limit the seismic risk and derive ad-hoc stimulation strategies,” says Grzegorz Kwiatek. The St1 Deep Heat Oy energy project is now approved for further advancement and after completion of a second well will move on to implementation of a fully functional geothermal plant for local heat provision.

The project’s success was made possible by close collaboration between the St1 Deep Heat Oy company that financed and coordinated the project, ASIR Ltd. from US that designed and implemented the seismic network, fastloc GmbH, a spin-off company from GFZ that provided near real-time seismic monitoring, ARUP from UK that designed and operated the traffic-light system, and the team from the ‘Geomechanics and Scientific Drilling’ section of GFZ. If GM/Cruise Is Way Behind Waymo, How Does It Compare To Tesla?