New mathematical approach tested for the search of flight MH370 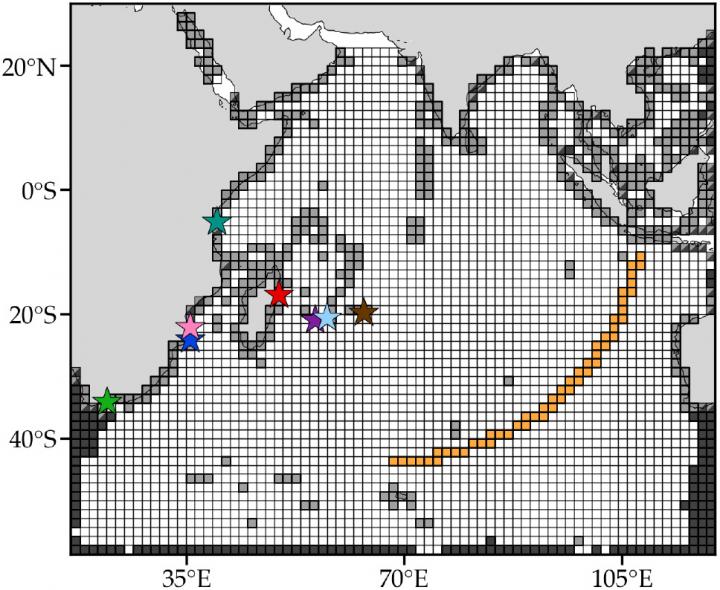 IMAGE: The Indian Ocean is covered of boxes forming the Markov chain models constructed using satellite-tracked drifter buoys to describe the motion of marine debris produced by the crash of Malaysia… view more

WASHINGTON, D.C., April 30, 2019 — The 2014 disappearance of Malaysia Airlines Flight MH370 remains ones of the biggest mysteries in aviation. More than $150 million has been spent so far to identify where the plane carrying 239 passengers crashed into the Indian Ocean, with no success. Recent efforts combining satellite data with a new mathematical approach aim to make headway in the search for plane crashes.

An international team of researchers has developed a new mathematical approach to analyzing how debris moves around the ocean that has been able to identify a potential crash site. Using what are known as Markov chain models, they have narrowed down a potential crash location substantially north of the region where most search efforts have concentrated.

A Markov chain model predicts the behavior of complicated systems by determining the probability of each outcome from the current state of what is being studied. They have been used to power Google search algorithms and model financial markets.

In the study, reported in the journal Chaos, from AIP Publishing, the group used data from the Global Drifters Program, a publicly available dataset that uses satellites to track spherical buoys as the ocean’s currents, waves and wind push them along paths over time.

In true Markovian fashion, each aimless buoy’s next turn is an independent event from every other movement it has made in the past. The buoys were then placed on a grid with more than 3,000 virtual squares to simulate where plane debris would float to.

One issue is that very little debris has been found so far.

“Surprisingly, after more than three years, there is only a handful of confirmed debris recovered from the airplane,” said Philippe Miron from University of Miami and the lead author on the paper. “This increases the errors of the model.”

“The monsoon in the Indian Ocean has important effects on the circulation of the region,” Miron said.

After the analysis, the team’s estimated search area was from 33 to 17 degrees south latitude along the arc of the last satellite to contact the downed plane, whose northern edge has remained largely unscrutinized.

Miron said he hopes the group’s approach will encourage future efforts to deploy more trackable devices in the ocean to provide more data to solve similarly vexing problems. He looks to use mathematical models to further understand how drifting objects move in the ocean, including the flow of hydrocarbons following undersea oil spills.

Chaos is devoted to increasing the understanding of nonlinear phenomena in all disciplines and describing their manifestations in a manner comprehensible to researchers from a broad spectrum of disciplines. See http://chaos.aip.org.

The signal of human-caused climate change has emerged in everyday weather, study finds – The Washington Post