Magpies and the RSPB

There is a lot made of the fact that the RSPB carries out lethal control of Carrion Crows, formerly under the revoked General Licence GL04, on a very small proportion of RSPB nature reserves (15 out of 218). Because this is a highly emotive issue the RSPB is attacked by those who wish the RSPB didn’t kill any Carrion Crows and those people have a legitimate view, with which I don’t really agree personally, because I agree that lethal control is acceptable as a measure of last resort. You may disagree, but that is still my opinion (although my hold on it has weakened a bit over the years, almost exactly 8 years, since I left the RSPB’s employment).

But the RSPB is also attacked by those who don’t really care how many Carrion Crows the RSPB kills but just want to cause trouble for the RSPB. These are mostly people who come from a background where they kill loads and loads and loads of Carrion Crows – the shooting industry. These attacks on the RSPB sometimes sometimes use the word ‘hypocritical’ simply to try to wound, but there is no hypocrisy in the RSPB’s position: the RSPB’s actions are very much in tune with its words ie it recognises (rightly or wrongly) that predator control sometimes helps conserve threatened species and carries out predator control on its nature reserves when non-lethal means have been tried and shown to be ineffective. That is a clear and defendable position and one which is thoroughly compliant with the relevant laws.

But none of that is about Magpies – I just thought I’d get it out of the way first. 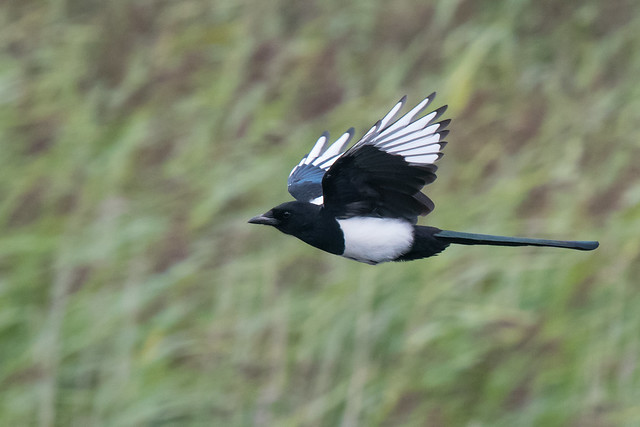 The RSPB publishes information on how much lethal predator control it does each year – I’m proud of the fact that I started this – transparency is important. I don’t think the National Trust or Wildlife Trusts do the same, and I would encourage them to do so.

So, let us consider the Magpie, a species that the game shooting lobby kills in large numbers despite the fact that the science carried out (which included a GWCT scientist, and, I have to say, top statistician) states has no discernible impact on population levels of songbirds.

How many Magpies does the RSPB kill on its 218 nature reserves that cover over 150,000 ha? 150,000ha is bigger than Greater Manchester, getting on for the size of Greater London and about the size of South Yorkshire – so the size of a small but not insignificant county. How many? None, apparently.

And no Rooks or Jackdaws or Jays either, apparently. I’m surprised there aren’t any at all – but there you go, there aren’t.

These facts may have some relevance for the general licence planned for publication soon by Natural England which relates to killing Magpies to protect wild birds (and those for Jackdaws, Jays and Rooks which are planned for ‘sometime later’).

Is there any conservation organisation calling for a general licence to allow Magpie killing? Or are the wild birds in mind released non-native Pheasants destined for commercial shooting? Compound in the gills of clams may fight common infections New technique pinpoints milestones in the evolution of bacteria