Where is NE heading with the licensing of bird-killing under General Licences? It’s difficult to tell, and we’ll have to see. However, the claim that it will all be business as usual already looks unlikely to be true.

Charlotte Smith: will it be harder to get a licence?

Marian Spain, Natural England: it shouldn’t be harder to get a licence.

Charlotte Smith: will it mean though that under some circumstances people won’t be able to get a licence to shoot birds?

Marian Spain, Natural England: I am struggling to envisage that situation.

The revoked General Licences, which were operating until midnight on Thursday can be viewed here; GL04, GL05 and GL06. The information on the gov.uk website on timetables for replacement licences is as follows: 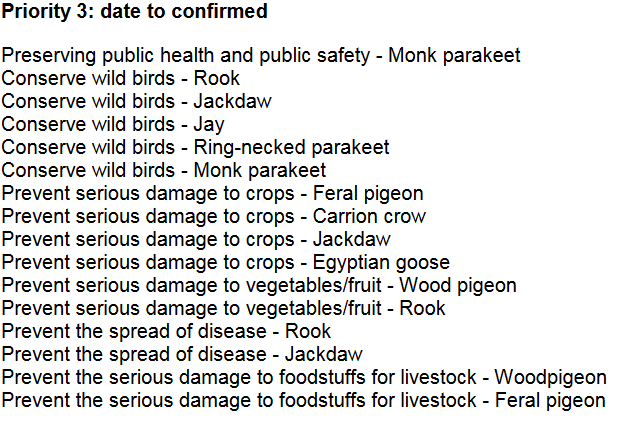 The number of species covered has dropped in the last week from 16 to 13 species.

Collared Dove, Indian House-crow and Sacred Ibis have dropped off the lists altogether – perhaps they may reappear but they are gone at the moment. Collared Dove was previously listed on both GLO4 and GL05 – but now it’s gone. In the last few days the Collared Dove is no longer considered by Natural England to be a threat to public health, public safety, disease spread, serious damage to crops or serious damage to livestock – who’d have known?! The other two non-native species were listed on GL06 but have now disappeared.

Only the Priority 1 and Priority 2 lists have any sort of a timetable and they only cover 8 species – half the number on the General Licences withdrawn on Thursday. The Priority 2 list doesn’t look very contentious to me – but we’ll have to wait and see. The General Licences have been cut to the bone – quite rightly – and the reasons for killing species have been greatly reduced better (though not perfectly) to represent both ecological and economic realities. The Priority 3 list has many of the most contentious issues buried in it, and there is no timetable for its publication or implementation. Perhaps we’ll be waiting until after the promised ‘consultation’ in ‘the summer’ before we see any of it published at all. We’ll have to wait and see.

We’ll have to see how it all pans out, and Natural England have not been known for their straight-dealing in recent years, but it’s looking like a massive climb-down to me. And let’s be clear, the possibility of further legal action remains for any stakeholders on this issue.

Jay was listed on all three previous licences but is now only found as a Priority 3 species and only for conserving wild birds – I will look forward to seeing that licence (see here). All of a sudden the Jay is not a threat to public health, public safety, a serious threat to livestock, a serious threat to crops or a problem of disease transmission – that’s quite a rehabilitation for a bird species after decades of denigration and licensed killing. The Jay doesn’t belong on the Priority 3 list as a threat to wild birds, any more than the Blackbird would deserve to be there as a threat to wild earthworms, but we’ll wait and see what happens. Jays will be flocking to Wild Justice to give us acorns as presents!

Magpie was listed on all three previous licences but is now only going to be treated as a threat to wild birds (see here) and under the category of serious damage to foodstuffs.

Jackdaw was listed on all three previous licences but is now relegated to a Priority 3 species (conserving wild birds, damage to crops and spread of disease). Generally speaking, corvids will be thanking Natural England and Wild Justice for the change in regime.

‘Gamekeeping’ of Rooks, Jackdaws and Jays for the purpose of allegedly conserving wild birds look as though they are put off for quite a while (date to be confirmed) and killing of Feral Pigeon, Egyptian Geese and Lesser Black-backed Gulls for the purpose of conserving wild birds have dropped off the list entirely (please note in the Forest of Bowland).

Killing Rooks and Carrion Crows to prevent serious damage to foodstocks for livestock are so important that they both appear twice!

Whereas GL04 covered 13 species, those categories (as best as one can compare) only will include 8 species in future and only 6 of those are in the Priority 1 or 2 categories. This represents a considerble move of ‘getting real’ although we await the details.

Whereas GL05 covered 12 species, those categories (as best as one can compare) only will include 5 species in future and only 4 of those are in the Priority 1 or 2 categories. This, too, represents a considerable move of ‘getting real’ although we await the details.

Whereas GL06 covered 13 species, those categories (as best as one can compare) only will include 8 species in future and only 3 of those are in the Priority 1 or 2 categories. This, once more, represents a considerable move of ‘getting real’ although we await the details. This category deals with species which can be killed to conserve wild birds – the main excuse of the gamekeeper who really wants to increase the shootable surplus of Pheasants or partridges – not to increase their populations but in order to increase the number of birds to be shot for fun and profit in the autumn/winter.

If you are a farmer – you should be fairly pleased with how things look as though they will end up.

If you are a nature conservationist, then you will be pretty relaxed about all of this and see it as a move in the right direction which improves the licensing regime.

If your business depends on the sale of Woodpigeons which weren’t killed for the purposes of preventing serious damage to crops then you may want to start lobbying for a change in the law that will allow shooting of Woodpigeons for the sale of their meat.

If you are a gamekeeper, then you are potentially seeing large amounts of your day-to-day casual killing of bird species being taken away from you. The statutory wildlife agency for England is clamping down on the species which can be killed now that a bright light has been shone on the licensing system.

These plans, if accurate, already represent a massive change in the licensing regime. They are mostly aimed at continuing to allow farmers to prevent serious damage to crops or livestock rather than allowing any old person to operate a Larsen trap in their garden, or gamekeeping. Remember, the law has not changed – but the statutory agency responsible for administering wildlife protection has been made to introduce a lawful licensing regime. Dust dampens albedo effect, spurs snowmelt in the heights of the Himalayas Do microbes control the formation of giant copper deposits?