Red-neck phalarope: a migratory divide towards the Pacific Ocean and the Arabian Sea 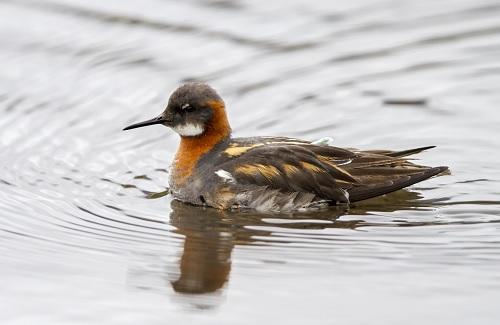 IMAGE: The results show the existence of a migratory divide with two defined populations of red-neck phalarope in the geography of the Western Palearctic. view more

When winter comes, populations of red-neck phalarope from the Western Palearctic migrate to two different destinations -the Pacific Ocean or the Arabian Sea- following an exceptional migratory divide strategy which has never been described in this geographical area.

A part of these bird populations -which breed in Greenland, Island and the British Islands- cross more than 10,000 kilometres to reach the Pacific Ocean, while populations in Scandinavia and Russia go to the Arabian Sea in the Indian Ocean, more than 6,000 kilometres away from their breeding areas.

This migratory behaviour is now described for the first time in an article published in Frontiers in Ecology and Evolution -in which the researchers Raül Ramos and Jacob González-Solís, from the Faculty of Biology and the Biodiversity Research Institute of the University of Barcelona (IRBio) take part.

An uncommon wintering species in the peninsula

The red-neck phalarope (Phalaropus lobatus) is a migratory bird from the family of phalaropes that live in the tundra and high polar latitudes during their reproduction season. These small shore birds spend a part of their annual cycle -mainly the wintering period- at open sea, and therefore they are regarded as pelagic birds. During the migratory routes after breeding season -from August to September- this species can be occasionally seen in peninsular areas such as the Ebro Delta or the Atlantic and the Cantabrian coasts.

In the new study, led by the expert Rob S. A. van Bemmelen, from the Wageningen University (the Netherlands), the UB-IRBio team has collaborated placing geolocators -devices to monitor long distance migrations- in different breeding sites, the modelling of the habitat of different populations and the study of the ecology of the marine birds. The results show the existence of a migratory divide with two defined populations -but relatively close- in the geography of the Western Palearctic.

“In particular, populations of the North Atlantic and the Fennoscandia spend the winter in two geographical areas far from each other and under differentiated environmental conductions (climate, natural resources, etc.) determined by the wintering area”, notes Raül Ramos, Ramón y Cajal researcher from the Department of Evolutionary Biology, Ecology and Environmental Sciences of the UB and IRBio.

“Red-neck phalarope populations of the North Atlantic stop along the way when migrating to the Pacific Ocean -covering almost the double of the distance- and migrate at a higher speed than the populations of Fennoscandia”, he continues. “They also have longer wings, a morphological feature that could be explained with the differences in the migratory pattern between both migratory bird populations”.

A migratory divide without geographical barriers

There are many cases of migratory divide in the European continent which are related to geographical barriers (for example, the Mediterranean). This is the case, for instance, of several species of sub-Saharan migratory birds with a dual migratory pattern: the models of populations that breed in the center and western areas of Europe migrate through the Strait of Gibraltar and the ones from Eastern Europe do so through the Arabian Peninsula.

However, regarding the red-neck phalarope, the migratory divide can occur without clear geographical barriers but as a reflex of the species’ biogeographical history. “The migratory route of the population of the North Atlantic towards the Pacific could be an evolutionary legacy of an ancestral population with its origins in North America. Therefore, the distribution range of this original nucleus would have spread to the east -to the British Islands- in a process that kept the primary migratory route of populations towards wintering areas of the Pacific Ocean”, notes Professor Jacob González-Solís, from the mentioned Department and IRBio.

Nowadays, the red-neck phalarope has a population between three and four million and the species shows a decreasing demographic trend in most of the breeding populations. It is catalogued as a least-concern species according to the International Union for Conservation of Nature (IUCN), and is mainly affected due industrial pollution -in particular, agricultural pesticides- and oil spills that affect the Arctic breeding regions. Also, the decline of farming activity in breeding areas makes plants to grow uncontrolledly, therefore invading lakes where red-neck phalarope use to nest.

In this context, the new study published in the journal Frontiers in Ecology and Evolution shows the importance of international scientific collaborations “and the metapopulational studies to identify global migratory patterns to find a specific species to avoid the risk of falling into local specificities that do not allow generalizing a migratory behaviour”, says Raül Ramos.

Researchers identify the sex of skeletons based on elbow features Melting ice sheets may cause ‘climate chaos’ according to new modelling