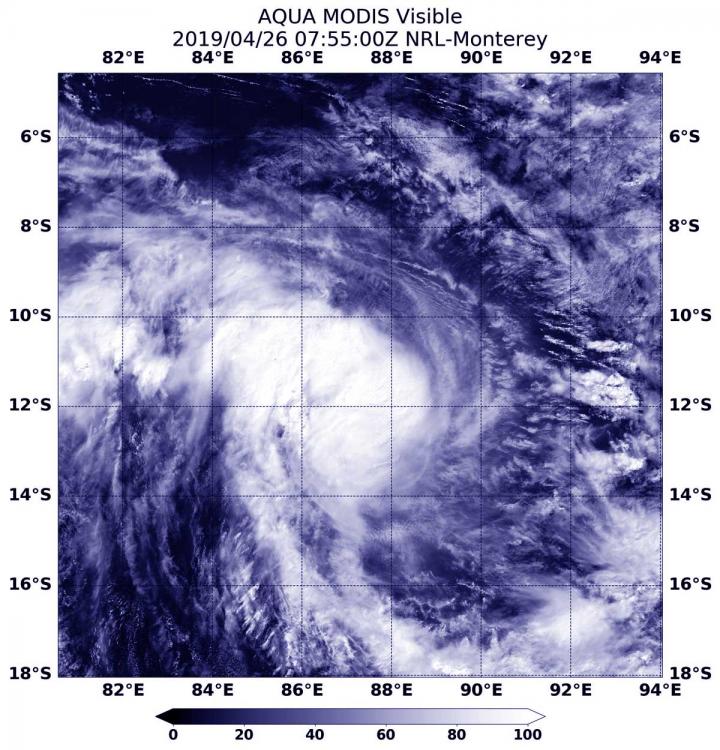 As Tropical Storm Lorna continued moving in a southerly direction in the Southeastern Indian Ocean, NASA’s Aqua satellite passed overhead and provided forecasters with a look at the storm.

At 3:55 a.m. EDT (0755 UTC) on April 26, the Moderate Resolution Imaging Spectroradiometer or MODIS instrument aboard Aqua captured a visible image of Lorna. Lorna does not appear symmetrical and the strongest thunderstorms appear over the western side of the storm. The Joint Typhoon Warning Center or JTWC forecasters also noted, “Animated enhanced infrared satellite imagery depicts a central dense overcast feature obscuring the low-level circulation center.”

Lorna is forecast to strengthen to hurricane-strengthen and move in a southerly direction. Over the weekend of April 27 and 28, Lorna is expected to begin transitioning into an extra-tropical cyclone.

That means that a tropical cyclone has lost its “tropical” characteristics. The National Hurricane Center defines “extra-tropical” as a transition that implies both poleward displacement (meaning it moves toward the north or south pole) of the cyclone and the conversion of the cyclone’s primary energy source from the release of latent heat of condensation to baroclinic (the temperature contrast between warm and cold air masses) processes. It is important to note that cyclones can become extratropical and retain winds of hurricane or tropical storm force. 5 Tips for a Sustainable Wedding