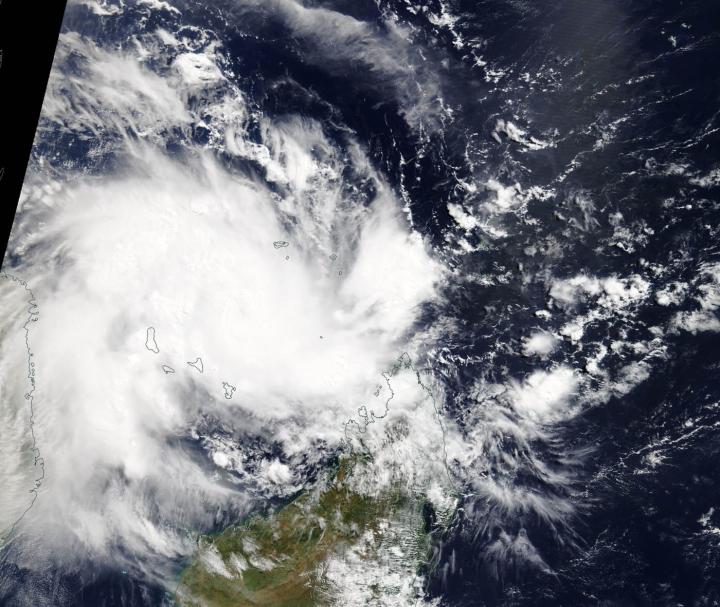 IMAGE: The MODIS instrument aboard NASA’s Aqua satellite provided this visible image of Tropical Cyclone Kenneth on April 24 as it moved into the Mozambique Channel, the body of water between… view more

The Atmospheric Infrared Sounder or AIRS instrument aboard NASA’s Aqua satellite passed over Tropical Cyclone Kenneth and analyzed the storm in infrared light.

Infrared light provides scientists with temperature data and that is important when trying to understand how strong storms can be. The higher the cloud tops, the colder and the stronger they are. So infrared light as that gathered by the AIRS instrument can identify the strongest sides of a tropical cyclone.

NASA’s Aqua satellite flew over Kenneth on April 23 at 6:41 a.m. EDT (1041 UTC).  AIRS detected strongest storms around the center of circulation and in a band of thunderstorms southwest of the center. Those areas revealed cloud top temperatures as cold as minus 63 degrees Fahrenheit (minus 53 degrees Celsius). Storms with cloud top temperatures that cold extend high into the troposphere and have the capability to produce heavy rainfall.

On April 24, Kenneth was located northeast of the island nation of Madagascar in the Southern Indian Ocean. The Moderate Resolution Imaging Spectroradiometer or MODIS instrument aboard NASA’s Aqua satellite provided a visible image of Tropical Cyclone Kenneth as it moved into the Mozambique Channel. The Channel is a body of water located between the island nation of Madagascar and Mozambique on the African mainland.

Forecasters at the Joint Typhoon Warning Center expect Kenneth to move west and then shift toward the west-southwest while strengthening to 105 knots (121 mph/194 kph) prior to landfall in northern Mozambique. Activists trying to prevent the vaquita porpoise from extinction How Does Geothermal Energy Work? Everything You Need to Know