Climate change protesters, who police say have caused “serious disruption” affecting half a million people in London over the past two days, have said they are planning to escalate their protests to disrupt rail and tube lines.

Thousands of people have taken part in the civil disobedience protests, blockading four landmarks in the capital in an attempt to force the government to take action on the escalating climate crisis.

Now the activist group Extinction Rebellion says it is planning to step up its action to disrupt rail and tube lines in London.

A spokesman said: “People really don’t want to do this but the inaction of the government in the face of this emergency leaves us little choice.”

Police said they had made 209 arrests related to the demonstration – five for criminal damage at the Shell building and a further 204 at Waterloo Bridge – though that number is expected to increase significantly.

The events in London were part of an international “climate rebellion” organised by Extinction Rebellion. Organisers said demonstrations had taken place or were planned in 80 cities across 33 countries – from India to Australia, and around Europe and the US.

In The Hague on Tuesday activists occupied the international criminal court building. In Scotland more than 1,000 protesters blockaded the North Bridge in Edinburgh, bringing one of the main routes into the city centre to a standstill.

The blockade began at 3pm, when groups of people on bikes converged from both sides of the bridge, before a human chain formed across the road. 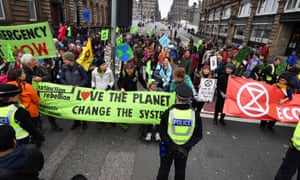 At about 5.30pm, protesters crossed Princes Street, the Scottish capital’s busiest shopping thoroughfare, and unfurled banners. Most were immediately carried off the road by police and six people were arrested.

Attending her first protest, Christine Patel, 69, said: “Usually I sit at home thinking: ‘What can one person do?’ But gathering together with other people changes that. We have to start thinking that we are a family.”

The biggest protests have been in London, with thousands of parents and their children joining scientists, teachers and environmentalists to demand urgent action in the face of “possible human extinction”.

Among the protesters was the prominent UN environment lawyer Farhana Yamin, who helped negotiate the Paris climate agreement. Just after 2pm she glued her hands to the pavement outside Shell’s headquarters near the Thames.

Nearby, police moved on to Waterloo Bridge to begin a second wave of arrests as hundreds of protesters continued their blockade. 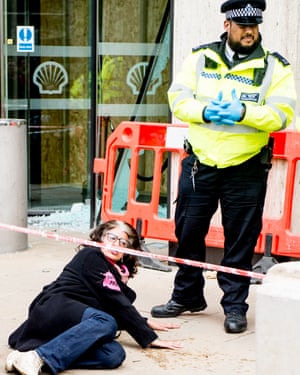 Farhana Yamin glues her hands to the pavement outside the Shell building in London. Photograph: Ollie Millington/Getty Images

One of those facing arrest was Angie Zealter, 67, from Knighton in Wales. “It will take the police some time to clear all these people and more will come here to support us,” she said. “But this is a very important moment in history – it should have happened 50 years ago.”

Some of those on the bridge had been locked or glued to a lorry parked across the carriageway since Monday night. One of those glued to the underside of the van, Ben Moss, 42, a company director from Bristol, said he had been there since midnight on Monday.

By about 5pm, the atmosphere at Waterloo Bridge had calmed after police stopped arresting people. A singer sang blues music from a stage.

“Art reminds us to be children”

Maxwell the Bubbleologist, second left, who is on Waterloo Bridge with his friends to perform for #ExtinctionRebellion protesters pic.twitter.com/KdJ0Epbb6j

On Tuesday evening police turned their attention away from Waterloo Bridge to Oxford Circus, where hundreds of people were dancing.

Officers circulated around the crowd in groups, informing people that if they stayed in that location they were at risk of arrest. The Guardian witnessed at least one person being carried away, while others left the crowd themselves after speaking to police.

“We are peaceful, what about you?” protesters chanted as police made an arrest. About two dozen people sat beside the stage, a pink boat, next to signs warning that they were glued on and could not be moved.

Extinction Rebellion was formed in the UK last year and held its first civil disobedience protests in London in November. It is calling on the UK government to reduce carbon emissions to zero by 2025 and establish a citizens’ assembly to devise an emergency plan of action to tackle climate breakdown and biodiversity loss.

The group wrote to Theresa May on Monday outlining their demands and asking for talks. In the letter they said they would escalate their disruptive actions during the coming days and weeks unless the government acted.

On Tuesday, Supt Colin Wingrove of the Metropolitan police confirmed a section 14 order was in place and called on the protesters to leave Waterloo Bridge, Oxford Circus and Parliament Square and continue their demonstration at Marble Arch.

‘I’m terrified’: Extinction Rebellion activists on why they are protesting

“In order to impose this condition, the Met required evidence that serious disruption was being caused to communities in London. We so far have 55 bus routes closed and 500,000 people affected as a result.

“Based on the information and intelligence available at the time, we are satisfied that this threshold has been met and this course of action is necessary in order to prevent ongoing serious disruptions to communities.” Global warming to raise frequency of heat waves: Study – Down To Earth Magazine Where Will Electrify America Drive “The Golden Spike?”