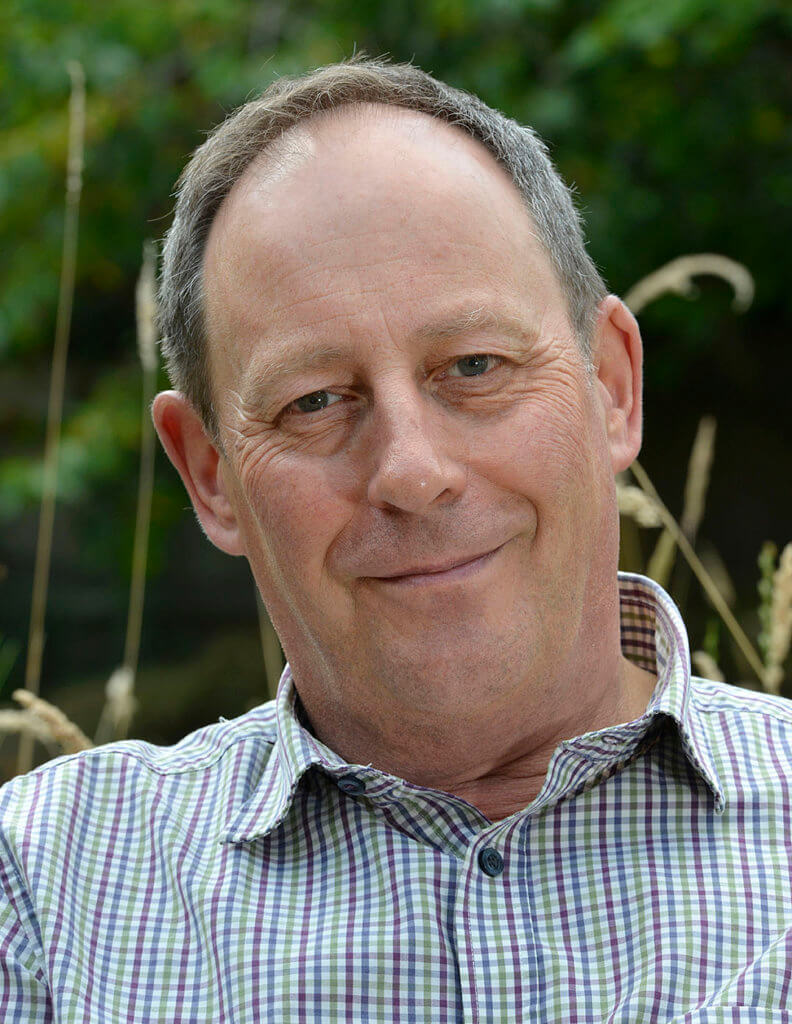 Paul Sterry has an academic background in freshwater biology and is a passionate conservationist. He has been writing about natural history and photographing wildlife for the last 40 years, with an emphasis on the British scene.

What should drop through my letterbox the other day but the spring 2019 copy of the borough council’s Basingstoke and Deane Today magazine? To its credit it had a small feature on page 8 referencing the Cufaude Lane Toad Massacre and how to help. But this was rather at odds with the magazine’s banner headline ‘Booming Basingstoke’ and the following text: ‘Plans to bring more jobs, deliver much-needed new homes and make the borough even more vibrant are beginning to bear fruit’. My heart sank. New homes mean more cars, and both will create even more problems for Cufaude Lane’s amphibians and other wildlife, what with loss of habitat and increased road carnage.

Thanks to social media and word of mouth many of Cufaude Lane’s road users are now aware of the amphibian mortality issue, and some are driving in a considerate manner. I emphasise some because there are plenty who still treat it like a racetrack, and toad-patrollers as tempting obstacles in their path. A few enlightened drivers stop to chat about what’s going on and we’ve even had the occasional driver pause, wind the window down and say ‘I’ve got a little present for you’ as they hand over a toad. So that’s a positive step forward. On the downside, last week somebody stole one of the toad crossing warnings signs; we’ve begged for a replacement but nothing has materialised. 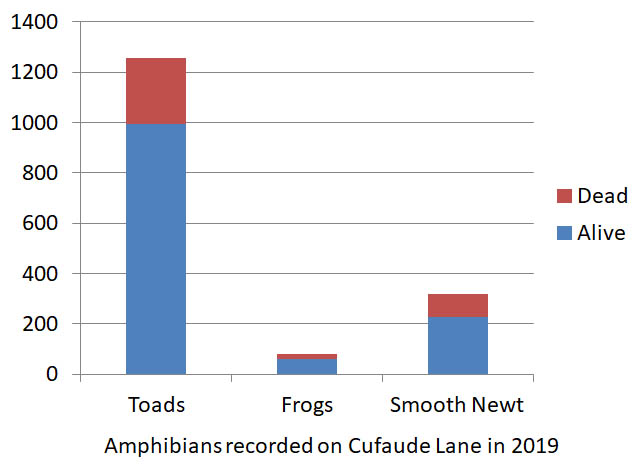 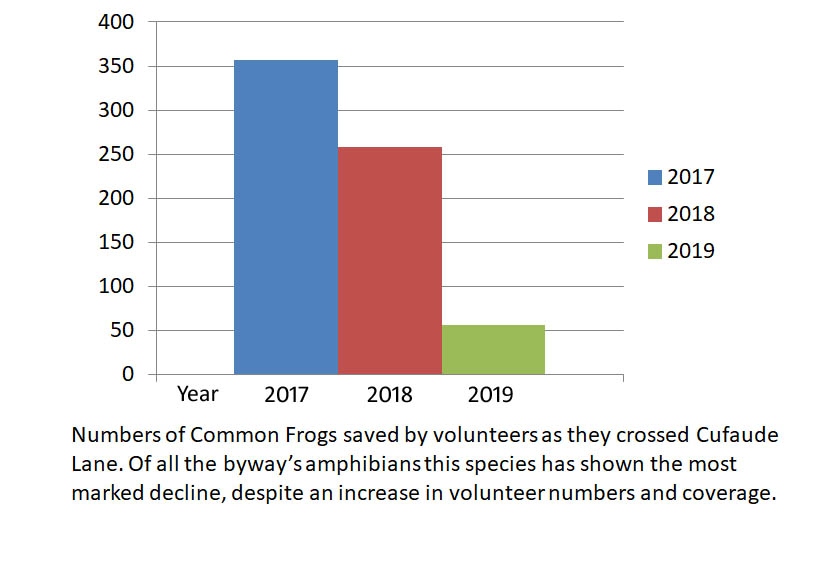 It pays to be persistent, and comments made in my previous blog about the Toad Team redoubling their efforts on the newt front have turned out to be prophetic. On Tuesday one of the team found another Great Crested Newt trying to cross Cufaude Lane; rescued in the nick of time, it proved to a large, mature female. In a case of ‘seek, and ye shall find’ it would have been Biblically fitting if the finder’s name had been Matthew rather than Peter, but you can’t have everything. And then another newt turned up in much the same place on Thursday night. 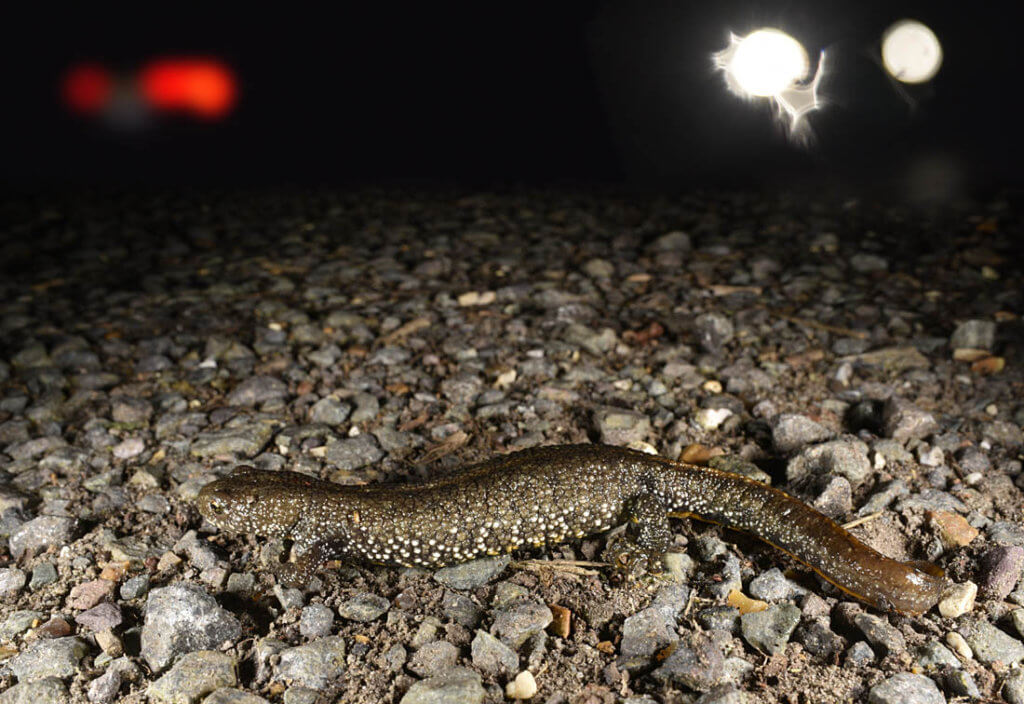 Cufaude Lane’s latest proposed development by Croudace Homes, on land owned by Hampshire County Council (Basingstoke & Deane ref. 19/00018/OUT), continues to intrigue me. Looking at the documents on the planning portal I am beginning to doubt my sanity. If the literature is to be believed then the construction of 350 homes plus a school in the countryside will lead to nothing but positive outcomes for wildlife, biodiversity and the environment. And the residents of those 350 homes will only contribute a measly four extra cars a day to the rat-run that is modern-day Cufaude Lane.

Four? Seriously? It would be refreshing if the debate about developments here and elsewhere in Britain could be based on grown-up, honest and realistic data and not concealed by layer upon layer of disingenuous surveys and ludicrously unrealistic forecasts. Then there really might be a slim chance that the outcome would benefit wildlife. Talking of benefits, who are the winners in all this? Not the wildlife, obviously. There’s landowners Hampshire County Council, developers Croudace Homes, Council Tax recipients Basingstoke & Deane Borough Council, and of course the utility companies. Oh, and I nearly forgot the homeless of Basingstoke, beneficiaries of those ‘much-needed new homes’. 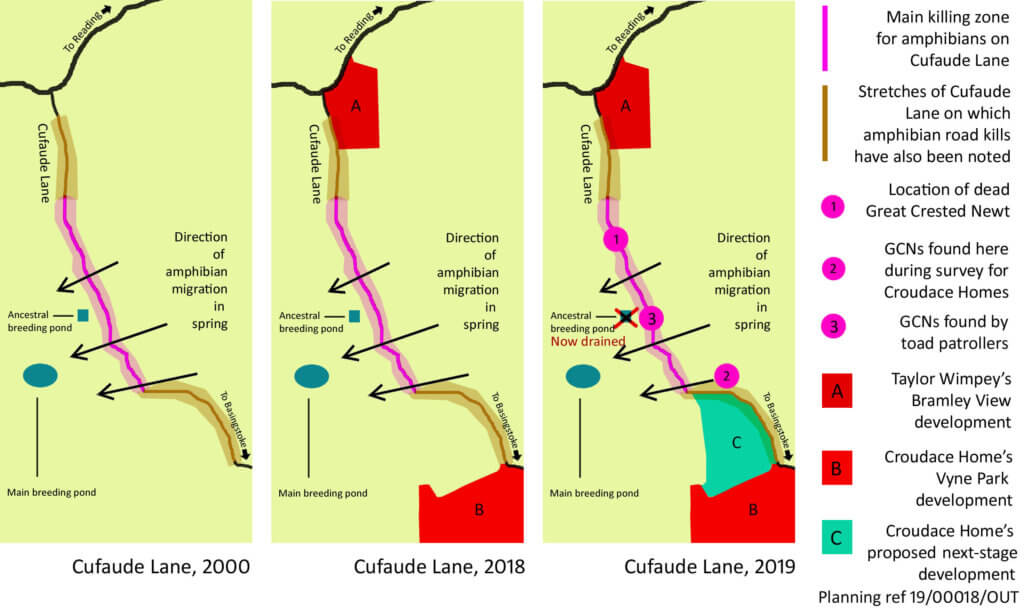 A visual representation of the march of progress along Cufaude Lane. And it introduces a fun new game for amphibian enthusiasts: join the Great Crested Newt dots and draw your own conclusion. Photo: Paul Sterry

Ecosulis, the environmental consultancy that initially worked for Croudace Homes (on planning application19/00018/OUT) no longer does so. New consultants have appeared on the scene and have engaged with Andrew Cleave. Let’s hope that this leads to a more constructive and positive outcome for amphibians and wildlife than has been the case so far. In the meantime, the Reptile and Amphibian Fencing that was supposed to have surrounded Croudace Homes’ Vyne Park development during its building phase is in the process of being repaired as I write, three weeks after Andrew first raised his concerns. But reinstating it now will surely make things worse for some amphibians. Spring migration has mostly finished and who knows how many hapless toads, frogs and newts have already strayed into the building site, attracted by its quagmire of ponds. So the very feature designed to exclude amphibians will imprison them and ultimately their fate will be sealed by bulldozers, diggers and tons of concrete. Perhaps this calls for a contemporary amphibian survey on site, given the presence nearby of Great Crested Newts? 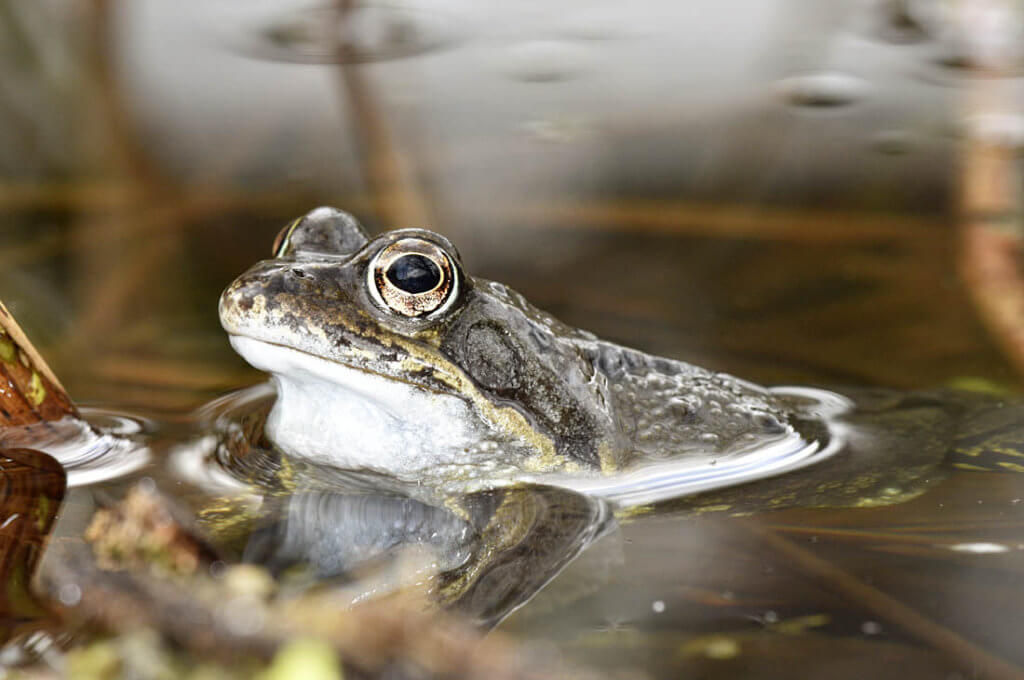 I wonder how many Common Frogs spawned in water-filled wheel-ruts inside Croudace Homes’ Vyne Park development while the exclusion fencing was derelict and allowed them access? Photo: Paul Sterry

Out of interest I had a look at the development brochure for Croudace Home’s Vyne Park development. It contains all the aspirational lifestyle twaddle you would expect of any sales pitch. And there’s also an attempt at virtue-signalling under the heading ‘NATURE AT HEART’ with such reassuring words as ‘…The tree and foliage planting throughout Vyne Park has been carefully planned to give both character and provide privacy. This includes a mixture of planted focal spaces, trees, enhanced woodland, waterside planting and grasslands that will offer a green, rural setting for new homes within Vyne Park while complementing and improving the ecology and biodiversity of the area….’And so it goes on. Sitting alongside the text is a cute picture of a little Harvest Mouse. In the unlikely event that any survived the blitzkrieg of the development stage, none would last long under the ensuing predatory regime of the estate’s domestic cats. After all, nowadays it is a requirement that every new home operates not only two cars but owns at least one cat or dog; preferably more than one. So in ten year’s time when Vyne Park’s canine population has reached carrying capacity, and long after Croudace Homes have moved on, the brochure’s ‘focal spaces’ may well have become ‘faecal spaces’. On a positive note, now is probably the time for Croudace Homes to think about road names for their new estate. I’ve got a few suggestions: how about Pond Street, Meadow Lane, Toad Road and Lark’s Close? Great Crested Newt Court is a bit of a mouthful and best discounted, a bit like the newts themselves. 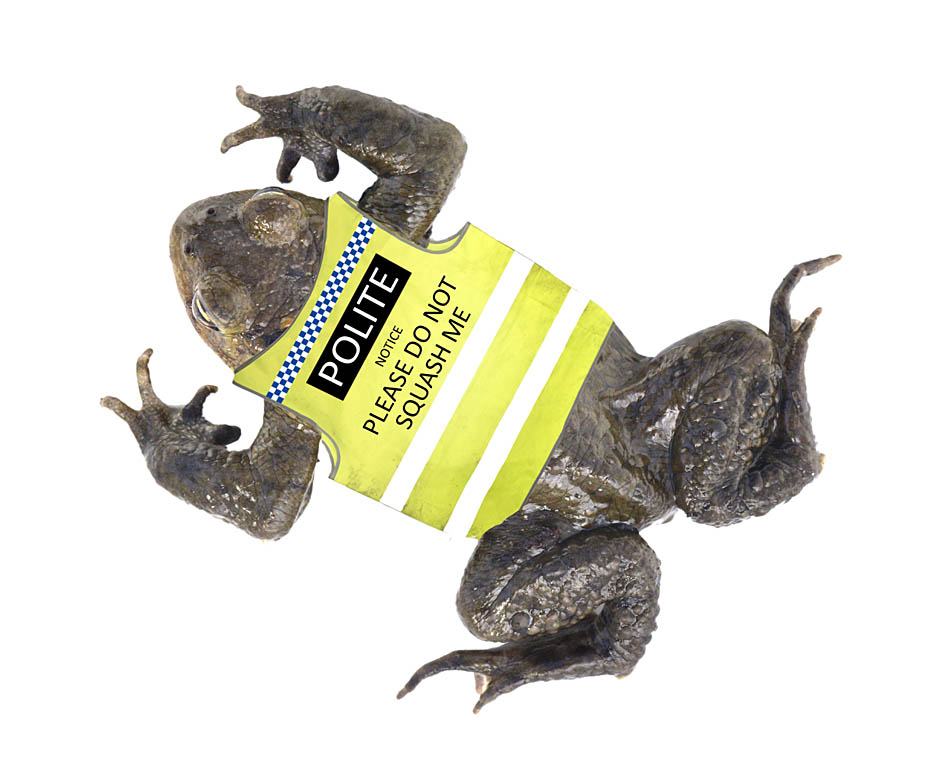 If only toads could speak and protest they would. But instead their highway sit-down protests just end with them being squashed. Photo: Paul Sterry

I’d like to think that change is in the air as spring approaches and certainly some of Cufaude Lane’s toad patrollers have become mild-mannered revolutionaries. What started as an exercise in animal rescue now feels like something of a softly-spoken Gilets Jaunes movement Basingstoke-style, what with our dress code of hi-viz jackets. We are fuelled of course not by anti-elitist disaffection but by rage against institutional contempt for the plight of wildlife. If we could dress the Cufaude Lane toads in little yellow vests we would, and for all I know there’s somebody out there making them as I write. In an age where there’s a website devoted to ‘Cats that look like Hitler’ I’ve come to think that anything’s possible.

For wildlife enthusiasts not fortunate enough to live in Basingstoke, remember that what’s going on at Cufaude Lane is being repeated across the country. So there is scope nationwide for everyone to help toads and become enraged. Equal opportunities for all I say. Contact Froglife and your local Amphibian and Reptile Group for more details of this amazing offer.

Those of you who have read previous blogs will recall that Megan McCubbin and Chris Packham visited Cufaude Lane to document the amphibian story. Their film is now finished so follow the link below to take a look. Thanks to Megan, Chris and the Lush team for their support. http://player.lush.com/channels/times/tv/think-toad

Low-temp photocatalyst could slash the carbon footprint for syngas